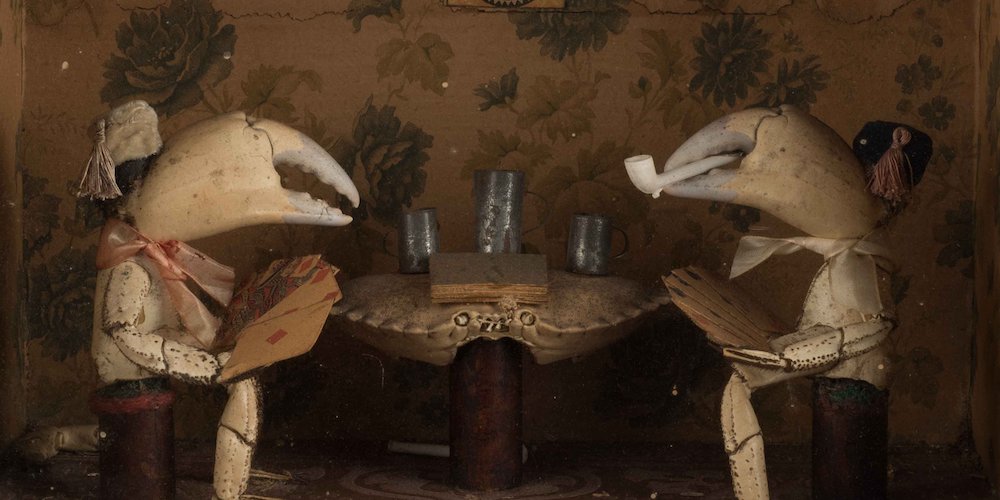 With their doors shut, museums all over the world have had to get creative with sharing their collections.

On April 17, the Yorkshire Museum in the United Kingdom put out a call to galleries to showcase their creepiest objects, prompting curators to sift through their pieces. Boy, they did not disappoint.

Here are some of the creepiest figures to come out of our world’s museums.

These figures reside in the York Castle Museum in the UK and are made of crabs legs and claws.

These are hand-made models of figures playing cards and of gold miners hauling gold nuggets to the surface. BUT the figures are made from crab’s legs and claws… Typical Victorians, they loved weird/creepy stuff. #CreepiestObject pic.twitter.com/A5NHiPGnVh

Check out this Plague Mask from the Deutsches Historisches Museum and be thankful for the fabric masks we have today.

Thanks for thinking of us @HottyCouture and wow, will we be having nightmares tonight with all these #CreepiestObject|s ! Here is the one we just can’t hide from you, one of our many creepy gems – our Plague Mask (1650/1750)! #curatorbattle pic.twitter.com/JrMjqAJSIM

This fox with a human face made of wax at The Museum of Witchcraft is definitely a thing of nightmares.

The Museum of Witchcraft in Boscastle, Cornwall has plenty of weird, wonderful and creepy objects! This is a taxidermy fox with a wax death mask!#CreepiestObject #CURATORBATTLE pic.twitter.com/hIiP83rXhY

This wax mannequin is certainly at home at the Museum of Fear and Wonder.

Our museum joined twitter solely to participate! This contribution is an early 19 c. wax child mannequin from Germany. It was stored face-down in a heated attic for many years, flattening its features into a snout. Please enjoy. #CreepiestObject #CURATORBATTLE pic.twitter.com/W3kitF7Utt

This toy bear with red eyes from the Toy Museum of Penshurst Place certainly won’t be at the top of our wishlist this Christmas.

Live from the Toy Museum of Penshurst Place, we present the Drinking Bear. Feed it a 2 pence piece and it’ll pretend to drink from its cup as it stares into your soul. #CuratorBattle #CreepiestObject pic.twitter.com/ohNl2974UJ

Perhaps not as creepy as Bong Joon-ho’s film Parasite, but these botfly larvae inside the stomach of a horse definitely have us queasy.

In mulling over our many options for #CreepiestObject in the @naturalsciences NMI Collection, I realized #creepy is in the eye of the beholder – I think those juv leeches are adorable @mccullermi.

I give you botfly larvae burrowed into the stomach of a horse. #CURATORBATTLE pic.twitter.com/fBkZIE7VAV

The mummified cat itself isn’t creepy, but the fact that it was found concealed in the floorboards of the York Mansion House is.

Ok so our entry for #creepiestobject is, of course, our mummified cat. It was found concealed in the floorboards above our State Room surrounded by a ring of hazelnut shells. The X-ray below was taken at a local vets (no one else had a machine big enough!) #CuratorBattle pic.twitter.com/O9nUoBp6gC

This doll’s face says it all.

While the Grant Museum of Zoology displays many creatures, this half-pregnant cat irks many visitors.

We have quite a few creepy specimen. According to many visitors, our #CreepiestObject is this one – half a pregnant cat in fluid: pic.twitter.com/OQuShfv2pN

Out on the floor, it’s probably our decomposing coyote in the dermestid beetle tank!

You can read about the tank and the decomposition process in our October article: https://t.co/atXK1wPEB1 pic.twitter.com/FtTW0gUmuJ

This thing at the Science Museum in London is so creepy that we don’t even know what to class it as.

I used to avoid walking past this when it was on display at the @sciencemuseum
You can’t unsee it.#CURATORBATTLE #CreepiestObject pic.twitter.com/MEzTBpQbBn

Last but not least are these television props of severed and injured limbs.

We’ve got A LOT of creepy object contenders for today’s #CURATORBATTLE but after some debate (Creepy dolls/ hair dug up from a grave/ a little man in a glass jar….!) we’re going with some pretty grim TV props from Casualty! https://t.co/7j3q2ipW7d #CreepiestObject pic.twitter.com/NR1aHOY9gS