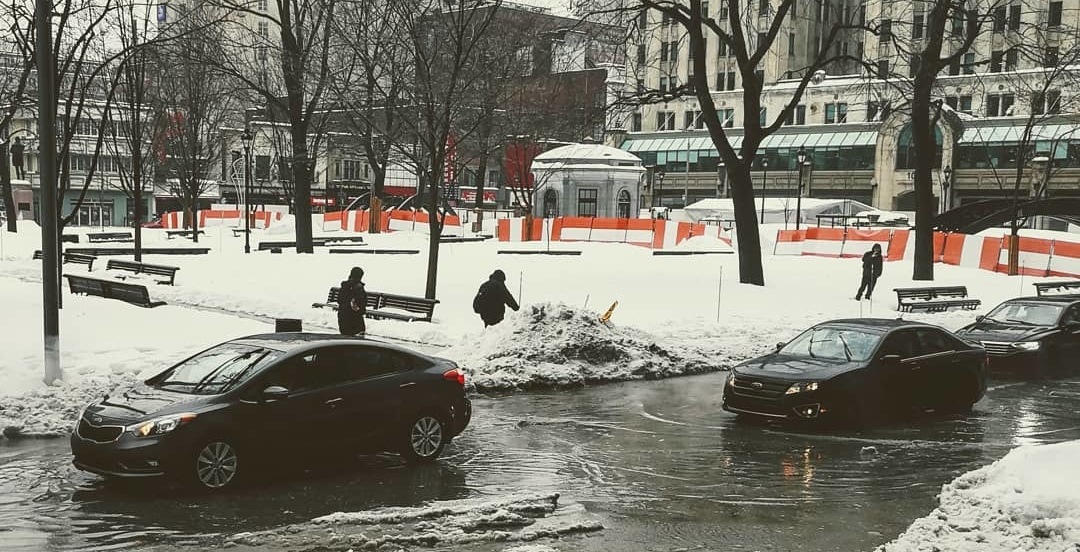 Montreal is usually an undeniably gorgeous city, but everyone has their off-days. Today is one of them. The aftermath of last night’s freezing rain has turned the city of le bleu, blanc, et rouge into the city of the icy, wet, and slushy.

Rubber boots barely did the streets justice today (a canoe might not have, either) and 46 schools on the island were closed as a result of the harsh conditions.

The driest place in the city was in the virtual world of Twitter, where people opted to deal with the Montreal’s slush through gifs, memes, sarcasm and humour.

As temperatures are expected to drop to below freezing again tonight, you’d best take in a couple laughs before the streets and roads get serious again.

Everyone in #Montreal today:

Leaving work now. If you don’t hear from me in an hour, I’ve surely drowned in a lake puddle. #montreal

what is going on in montreal pic.twitter.com/7wsumvuwB9

I picked the worst weather to walk home in. Your three options: Walk on wet ice while flailing your arms and praying, ruin your shoes and pants by trying to make it across slush, or bring a paddle boat to sail across puddles the size of small nations. #Montreal #mtl pic.twitter.com/dyRQk6fcvT

Winter is so pretty. #Montreal pic.twitter.com/dzZvdovEEu

in case you were visiting montreal today, i hope you packed a swimsuit and skates. look at that lake #montreal #joke that’ll be an ice rink by the time work is done pic.twitter.com/TkpcECJ4hC

*Looks out the office window*

@PSTM09 The other side of the rain storm #Montreal #Mouille 😂😂😂😂😂😂 pic.twitter.com/KBwyCeA0nj

Looking at the window this morning after a night of freezing rain. #montreal #mtl pic.twitter.com/kD2BYgG6QH

Me this morning, #Montreal… pic.twitter.com/x2GiqMLC4E