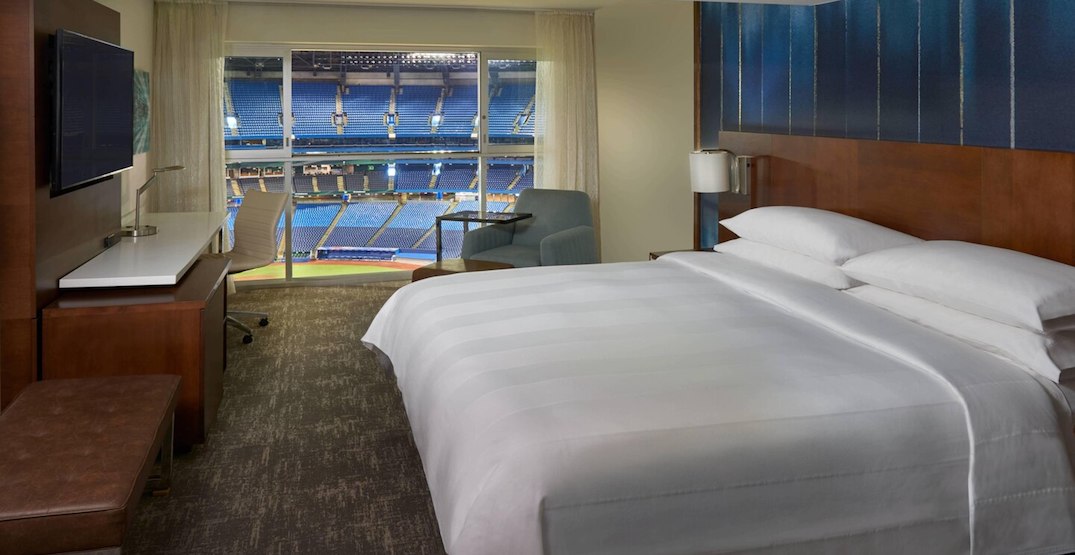 The view from inside one of the rooms at the Toronto Marriott City Centre Hotel (Marriott.com)

The Toronto Blue Jays are getting the hell out of Florida, and they’re on their way back to Canada.

Ontario Premier Doug Ford confirmed that the team plans to travel to Toronto, with on-field practices to follow beginning on July 1. The team intends to play games at Rogers Centre, though they’re still waiting on formal approval.

“I’ve been in conversations with [Blue Jays President] Mark Shapiro all weekend, going back and forth,” said Ford. “He’s just waiting for the letter of support from the municipal, provincial, and federal health folks. They kind of gave their approval. I know there’s a few tweaks here with the province that [Ontario Chief Medical Officer Dr. David Williams] wants to work out with them.

“But we have to wait for the approval of the federal government on the quarantine side of things. They’re going to be arriving July the 1st and kicking off the practice moving forward.”

Getting out of Florida is a very good idea right now, as the state is seeing a surge in cases in recent weeks, including an additional 8,530 new cases on Sunday. The Jays were forced to close their facility 10 days ago, after multiple players and staff tested positive for the virus.

But this will make some people nervous back in Toronto.

Many had assumed that the Jays would play all of their games in the United States this season, but that appears to no longer be the case. The Blue Jays, as well as visiting teams, would need to quarantine as a group, much in the same way that had been approved by the federal government for the NHL’s hub city plan. Canada still has a mandatory 14-day quarantine rule in place for incoming travellers.

The Blue Jays’ home ballpark is uniquely built to deal with such a scenario, given that Rogers Centre has a hotel inside of it. The old SkyDome Hotel, which is now known as the Toronto Marriott City Centre Hotel, could host Blue Jays players as well as visitors in a cohort quarantine.

If Blue Jays get final approval to head north, players/staff will be staying at hotel attached to ballpark. They’re required to quarantine, but can go to the field and back to rooms. There is direct access from hotel to ballpark.

The plan, at least for Blue Jays players according to a report from Sportsnet’s Hazel Mae, would be to stay at the hotel.

It would be a bizarre scenario for players, who would essentially live and work inside a baseball stadium, without the ability to leave due to the quarantine rule.

Major League Baseball has agreed to play a 60-game season, likely beginning around July 24. The Blue Jays would play games against teams from the AL East and NL East divisions, meaning that nine teams based in the United States would visit Toronto for games.