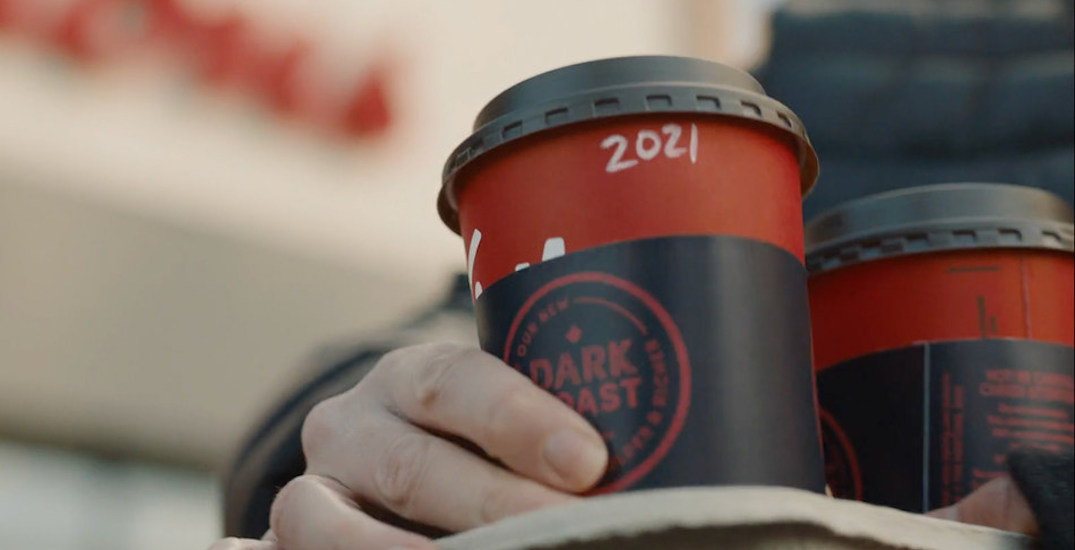 Out with the old and in with the new. It’s a new year and Tim Horton’s is re-re-launching its new and improved Dark Roast made from 100% premium Arabica beans.

Tim Horton’s revamped blend of coffee is more rich and bold than ever before, according to a statement released by the coffee chain.

After developing about four dozen variations of the blend in the last year, they’ve crafted the roast based on guest demand for something a little bolder in flavour.

“The amount of work that went into developing this new Dark Roast was really incredible. We actually developed about four dozen variations of the Dark Roast to zero in on the perfect balance of richness and smoothness,” said Kevin West, Head of Coffee Operations.

“We wanted this Dark Roast to taste bold — but not burnt or bitter. It’s incredibly rich with a harmonious blend of complex flavours, subtle notes of chocolate, cedar and even hints of fruit and floral characteristics.”

Tim Hortons first launched its Dark Roast back in 2014 then adapted to be darker in 2017. This new creation starts with the sourcing of its premium 100% Arabica beans “primarily from Central and South America, and for Dark Roast it included sourcing beans from Sumatra, Indonesia.”

Before the new year, Canadians shared their favourites from Tim Hortons, and the most popular drink of the year was the classic Double-Double, so it might be safe to say that Canadians love their coffee.

“Guests liked our previous Dark Roasts for their smoothness and flavour, but given the quality of the beans we source, we knew we could — and should — make our new Dark Roast bolder than ever before,” said West.

“We worked hard on adjusting our roast settings by increasing the time, weight concentration and temperature in the roaster to really dial in the flavour profile we thought guests would love, resulting in an all new complex coffee with a full body that’s richer than any of our previous Dark Roasts.”