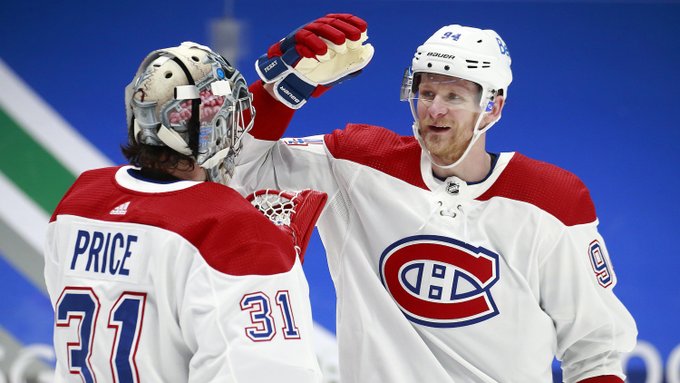 When the Montreal Canadiens host the Calgary Flames on Thursday in their first game at Bell Centre since last March, it’s probably going to be an eerie experience.

While the Canadiens may be used to playing without fans at this point, playing for the first time with empty stands in a rink where the atmosphere is usually second to none is going to be bizarre. It’s a shame, because given the start Montreal has gotten off to this season, we can only imagine what the atmosphere would be like for the home opener at a packed Bell Centre on Thursday.

If you’d told any Habs fans that the team would be heading home from their season-opening six-game road trip through Toronto, Edmonton, and Vancouver tied for the league lead with 10 points and leading the NHL with 29 goals for, it’s a pretty safe bet they’d have happily taken that.

Today we’re going to give you six of our takeaways from the Habs’ impressive road trip to begin the season.

The hope coming into the season for the Canadiens was that what they lacked in star power they’d be able to make up for with a deep team that could score up and down the lineup. So far, so good.

Tyler Toffoli, Tomas Tatar, Nick Suzuki, Jonathan Drouin, and Joel Armia have all scored at least at a point per game pace so far, and those forwards are spread out over three different lines. Montreal hasn’t had to lean on anyone too heavily because there’ve been contributions from so many different sources. Suzuki leads their forwards with an average of just 17:33 TOI per game, and they have seven other forwards averaging over 14 minutes per game.

Montreal’s depth even extends to the taxi squad. When the Habs lost Armia to a concussion suffered on a hit from Tyler Myers late in last Thursday’s 7-3 win over the Canucks, Corey Perry stepped into the lineup on Saturday, played over 15 minutes, had four shots on goal and scored on one of them.

Let’s get back to young Nick Suzuki for a minute.

After all, in addition to leading Montreal forwards in ice time, he’s also started his sophomore season with a six-game point streak and has just been fun to watch.

Morgan Rielly gets turned inside out, Suzuki looks nasty. pic.twitter.com/q9HeHPiEun

Suzuki has been putting his high-end skill and hockey IQ on display on a nightly basis, building off his solid rookie season and impressive playoff performance in the bubble.

It’s no surprise that the Columbus Blue Jackets were asking for Suzuki to be included in a potential Pierre-Luc Dubois trade with the Habs before ultimately sending Dubois to the Winnipeg Jets, but Marc Bergevin did the right thing by holding on to Suzuki. He’s already really good and looks like he’s just going to get better.

Jeff Petry has always been a little bit under-appreciated. He first played in P.K. Subban’s shadow on Montreal’s blue line, then Shea Weber’s. It’s time to give him the credit he’s due for what an important part of the Canadiens he is.

Though usually signing a player approaching his mid-30’s to a four-year contract extension with a $6.25 million cap would be a dicey proposition, it already looks like a brilliant move by Bergevin. So far this season all Petry’s doing is leading all NHL defencemen with seven points and leading the league with a +9 rating while logging over 22 minutes of ice time per game for the Habs.

Already coming off the three most productive seasons of his career, Petry just seems to be getting better with age.

While it’s still too early to say anything too definitive about the players Bergevin picked up in the offseason, they at least know how to make a good first impression.

Josh Anderson scored a pair of goals in his Habs debut against the Maple Leafs. Toffoli exploded for five goals and seven points in three games against his former Canucks team. Joel Edmundson has a goal, an assist and a +8 rating. Jake Allen has won each of his first two starts, allowing just four goals in total, and then there was Corey Perry turning back the clock on Saturday, scoring a goal in an impressive debut.

So far, everyone’s fitting in just the way Bergevin envisioned.

5. They should really stop taking so many penalties

Another part of what’s been so impressive about the Habs’ start, in a way, is how they’ve managed to do it despite how much time they’ve spent shorthanded.

Montreal has taken an average of seven minor penalties per game so far this season. They lead the league by far with 42 of them, with Vancouver a distant second with 30. It’s not like the Canadiens’ penalty kill has been great, either, ranking just 15th in the league at a 78.6% kill rate.

And yet, the Habs have still yet to lose in regulation this season. It makes you wonder what they might be capable of if they could do a better job of staying out of the penalty box.

Phillip Danault’s third among Montreal forwards in average ice time so far at 16:21 per game, but that’s largely thanks to how much time the Habs have spent shorthanded.

Danault’s future with the team was one of our biggest questions for the Canadiens coming into this season. If he didn’t want to be used primarily in a defensive role, it’s hard to imagine he’s too happy with his usage so far, given that he’s taken 66% of his faceoffs in the defensive zone. He only has two shots on goal through six games.

Then there was the recent report of the long-term extension Danault turned down from the Habs before the season.

It’s hard to imagine the Canadiens increasing on that offer for a guy who probably profiles as their third-line centre moving forward. For Bergevin, the question he may end up facing is whether he thinks there’s more value in getting whatever he can for Danault at the trade deadline or keeping him around to help with one last playoff run.