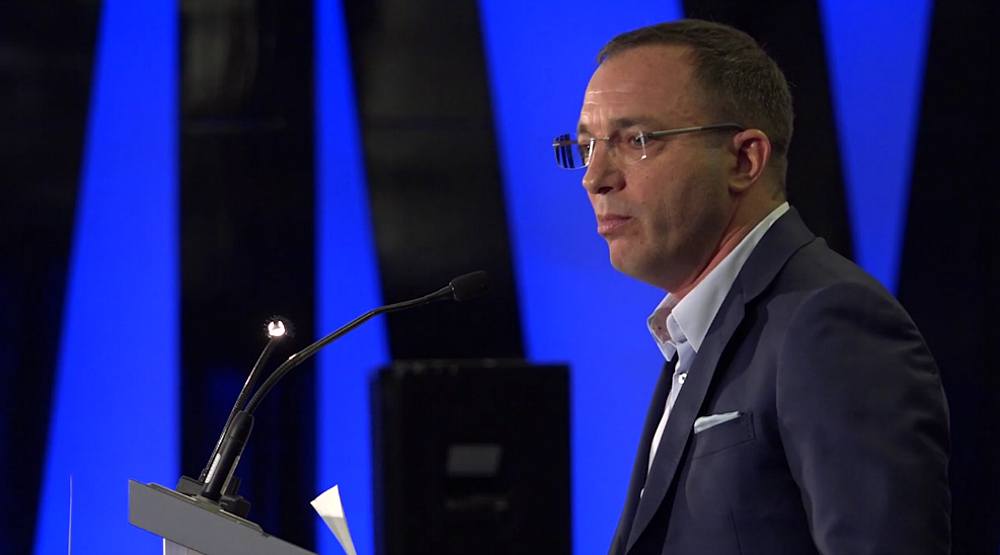 His common-sense, highly on-point, and even-handed comments were a breath of fresh air in the often-stale, recycled atmosphere of listening to the same old boring often-parochial politics in this province. In a hard-hitting, no-holds-barred, brutally honest speech he candidly pointed the finger at both his own English community and the French community for not breaking away from old patterns and the decades-long blame game.

“The resistance by members of my own Jewish anglo community to learn, live, and speak French is short-sighted and embarrassing,” he said addressing Quebec’s English community.

“The failure on the French side to see the global and cultural benefits for their children to speak at least two languages, including the world’s working business and internet language is paralyzing the potential of generations of French Canadians,” he said to francophone Quebecers.

Not content with those truth bombs, he then went on to criticize Quebec’s abysmal school drop-out rates and lack of good education as being at the “absolute core of everything that could and does go wrong in a young child’s life” and emphasized the dire need for better education, better acquisition of practical financial skills by students, as well as a concentrated effort by all to celebrate Quebec’s business successes and instilling pride in our success stories.

Garber feels strongly that when it comes to business in this province, politics continue to remain the proverbial tail wagging the dog. As far as he’s concerned, “it is only by leaving politics aside that we can begin to make policies that actually have people’s welfare as a true and pure priority.”

The buzz following his speech was immediate and most major local news sources and political pundits understandably rushed to report it.

How they reported on it, however, and the angle they chose to go with is what I found to be most telling.

Neither side was ready to turn the finger and point at themselves. They either casually chose not to reference that specific criticism in their headlines, or conveniently chose to prioritize the “attacks” on the other community.

Montreal Gazette columnist Don Macpherson tweeted the link to the La Presse article with the sarcastic comment: “If you could read this, you’d realize that you’re embarrassing Mitch Garber by not ‘living in French’, and later implied that Garber has only been invited on to Tout le Monde en Parle because he’ll be anglo bashing.

Right… Because Garber’s extraordinary speech and his points don’t deserve a wider audience. He was just invited to vilify and make fun of poor anglos. Perhaps some of us should go back and take another listen to that part about being “short-sighted”.

Speech not courageous, but common sense

The fact that people are calling his speech “courageous” and “hard-hitting” when it’s just good old common sense, is revealing of how much tension still exists and how so many Quebecers on both side of the linguistic fence continue to walk on egg shells when it comes to linguistic and cultural identity and how it relates to our everyday lives and the hindrances it presents to move forward.

The way his speech was reported, the deliberately biased (in certain cases) media angles taken by each side, and the immediate reaction I observed by many Quebecers to get their backs up against the wall and justify the lack of progress or lay the blame on other factors was extremely telling – and yes, disappointing.

The reality is that Mitch Garber is absolutely right, and those who comfortably navigate between both worlds linguistically and culturally will be the first to tell you that more work still needs to be done, and that the old divides, prejudices, and knee-jerk reactions need to go.

It’s not enough for English Quebecers to ramble off the statistics proving that they’re more bilingual than French Quebecers (they are, but mainly, I suspect, because most Anglophones live in Montreal, a city where most Francophones are bilingual, as well) as a retort to Garber’s “accusation”.

Living in Quebec in a way that you can truly enjoy all this place has to offer requires much more than being able to function adequately in French. It means truly immersing yourself in the culture and having it become a part of yours. I don’t know who’s to blame for that not having happened to a significant percentage of allophones and Anglophones in this community, but it’s an undeniable fact that a large segment lives their lives here with no in-depth knowledge of the dominant culture and language. And no, it’s not about who knows or cares about Martin Matte. Martin Matte was just an example, so let it go.

When it was announced last year that I would be one of the current affairs panelists on Bazzo TV, I was bombarded with messages in my inbox — my francophone friends congratulating me and my Anglophone friends asking: “who?” It’s nothing more than an anecdote, but it’s a telling one when English Quebecers can’t even identify one of the most popular French TV and radio broadcasters in this province. A lot more work still needs to be done — on both sides — to better integrate, bring together, and unite both communities, in a way that is truly beneficial for us all.

There’s no point in denying this. There’s no point in playing that tired old blame game of “who’s more at fault” and “who’s community is more in danger” and “who said what about whom”. It’s played out and it’s boring and it’s counter-productive. I love Garber’s non-apologetic respect for Rene Levesque’s vision to ensure the French culture and language’s survival, but I also love that he called out Quebec politicians for using Quebecers’ deep-seated and often-understandable fears about the survival of their language and culture to opportunistically push their own self-serving agendas.

Most importantly, I have immense respect for his vision to move past the “two solitudes” and unite this province’s formidable talents for everyone’s benefit. This is a vibrant and extraordinary place to live in, but like crabs in a bucket, we often tend to pull each other down. It’s nice to have someone spell it out for us – in impeccable French and English

I encourage everyone to watch his entire speech. It’s well worth your time.