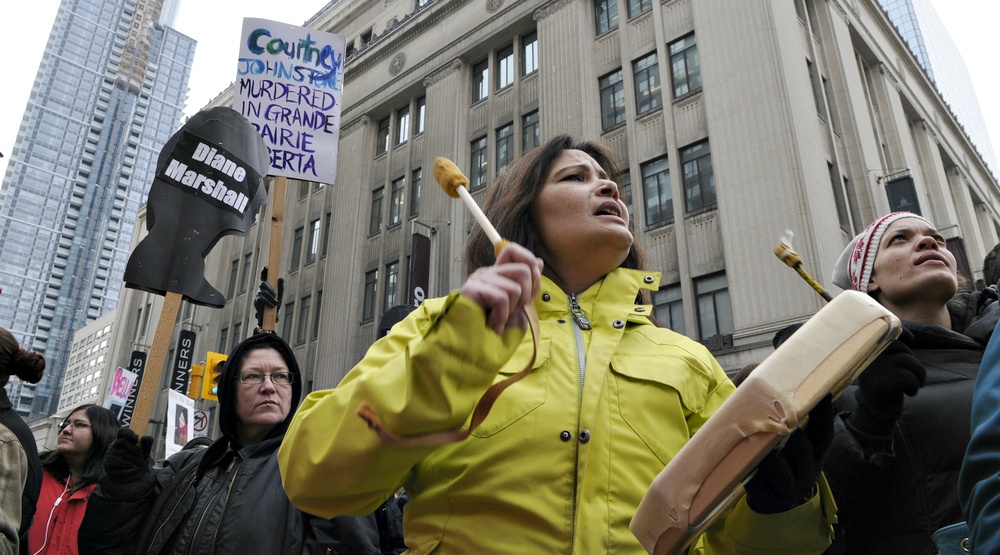 News that a march in solidarity with SQ police officers accused of long-term and prevalent sexual abuse of Indigenous women in their community took place this past weekend in Val d’Or left me speechless and frankly, a little disgusted.

Since the story by Radio-Canada’s investigative program Enquête broke this past year the Quebec town of Val d’Or has consistently made front-page news.

The accusations range from police officers requesting oral sex in exchange for drugs, alcohol, or money, to “starlight tours” where police officers would pick up aboriginal women and drop them off in the middle of nowhere miles from town in the dead of winter.

Despite the allegations having been public for half a year before the Radio-Canada report aired, the police department continued to drag its heels and the accused officers continued to remain on duty, policing the very same streets these women walked on.

After the report aired and the news exploded all over our TV screens and made the rounds of social media, the very first thing SQ Capt. Guy Lapointe did was go into denial mode and state that the allegations (some of which date back 10 years) “weren’t a reflection” of the police force”, after which police officers were put on paid leave (“sent home” is how it was worded), and the investigation was transferred over to the Montreal police.

Predictably, when police investigate their own, despite a whopping 38 allegations of police abuse against these officers, not a single one stuck. Not a single police officer was convicted of wrong-doing and zero police officers have so far faced zero consequences for their actions.

Women’s rights advocates already know how imperfect and severely limited our legal system is when it comes to “he said/she said” accusations and how the burden of truth and being the “perfect” victim almost always falls on the accuser. God help a woman if she has a prior sexual history or a history of drug or alcohol use. She is immediately relegated to that pile of “untrustworthy” and “motivated by revenge” women who accuse innocent men of wrongdoings to easily do them harm.

Despite statistics that consistently prove that false accusations consist of a mere 3-4 percent of total accusations, the tendency to disbelieve accusers is ingrained in us as a society. Women rarely report sexual assault, by the way. A measly 10 percent of total accusations ever see the light, because – you guessed it – women are not believed, so why bother? So we can be dragged through the mud and our entire lives put on display and found wanting? No, thank you.

Now if you add racism and classism to the mix, aboriginal women stand even less of a chance of being considered credible witnesses. And the Val d’Or police force knows this and is capitalizing on it.

How did they react to the initial accusations? If your money is on disbelief, disgust, shame, a promise to clean house and get rid of the bad apples, an open call for more transparency and accountability, you shouldn’t be betting.

They reacted by circling the wagons and attacking their accusers in order to save face.

They are suing Radio-Canada for airing the report and demanding $2.3 million in damages because they claim it was “biased, misleading” and its content was “inaccurate, incomplete and untrue.” They also added that they felt that the report created a hostile working environment for them.

These women have to continue living in this small community of 32,000 people knowing that the police officers they openly accused of sexual abuse and assault are walking the same streets, in charge of their safety and well-being, knowing the law and public opinion are on the officers’ side, but the environment is “hostile” for whom exactly? I don’t even know where to begin with this one…

Mathieu Locas, with Quebec’s Crown prosecutor’s office, made it very clear that just because there was no conviction does not mean crimes were not committed. As in the Joan Ghomeshi case, there simply wasn’t enough evidence to convict.

“The fact that charges are not being laid doesn’t mean the event didn’t take place. The burden of proof on the Crown is very high and we have to show that these suspects are guilty beyond a reasonable doubt,” he said during a press conference after the verdict was announced.

Considering the difficulty sexual assault victims have in getting any justice it doesn’t surprise me that these women didn’t see any. Considering the prevailing discrimination and prejudice Indigenous communities face in Canada every single day it doesn’t surprise me that so many people distrust and refuse to believe them. Considering the people conducting the investigation are members of the same brotherhood being accused, you can see how these women already had three humongous strikes against them.

Among the people taking part in the march this past weekend were about a dozen plainclothes police officers accompanied by their families and Val d’Or residents who had shown up to reiterate their faith in their police force.

One of the spouses was quoted as saying: “We’re not here to play the victims or so you can feel sorry for us, but this hasn’t been an easy situation for police officers, their families, and those close to them.”

While I in no way would ever minimize the legitimate pain that family members of any accused (innocent or otherwise) would feel upon charges being laid, and the aftermath that must follow such accusations, there is such a disconnect here and such a disinterest in the victims that it’s mind-boggling. Would it not behoove some of these residents to err on the side of caution and perhaps question if there is any truth to so many accusations?

There’s a French expression that immediately popped into my head when I found out about the march. «Se garder une petite gêne», which loosely translates into “Shield yourself from a little embarrassment” or what in English is usually “Have you no shame?”

Despite there being no convictions, there were 38 cases of complaints of persistent and chronic police abuse, including rape, sexual assault, and harassment. Thirty eight cases of abuse of power. The SQ has stonewalled, denied, sued in retaliation, and is now partaking in solidarity marches with friends and family, openly mocking these women brave enough to come forward with accusations.

The law of averages and the extremely low statistical probability that these women were lying would compel me as a law enforcement agent to take a good hard look at my conduct and the conduct of my fellow officers. If I were a law-abiding and conscientious police officer I would be eager to clean house and compelled to transparency so faith in the system would be re-established.

I would be standing alongside the many demanding that the Inquiry into the Missing and Murdered Indigenous women would include (as it’s so-far failed to) an investigation into policing and aboriginal communities. I would be embarrassed to be taking part in marches openly flaunting a flawed legal system and a country that continues to devalue and denigrate indigenous women as barely human.

But of course that would require not being in denial over systemic racism and sexism, and this country’s deeply held prejudices against our own Indigenous communities. Looking in the mirror is sometimes the hardest and most distressing thing to do. It’s much easier to just look away.