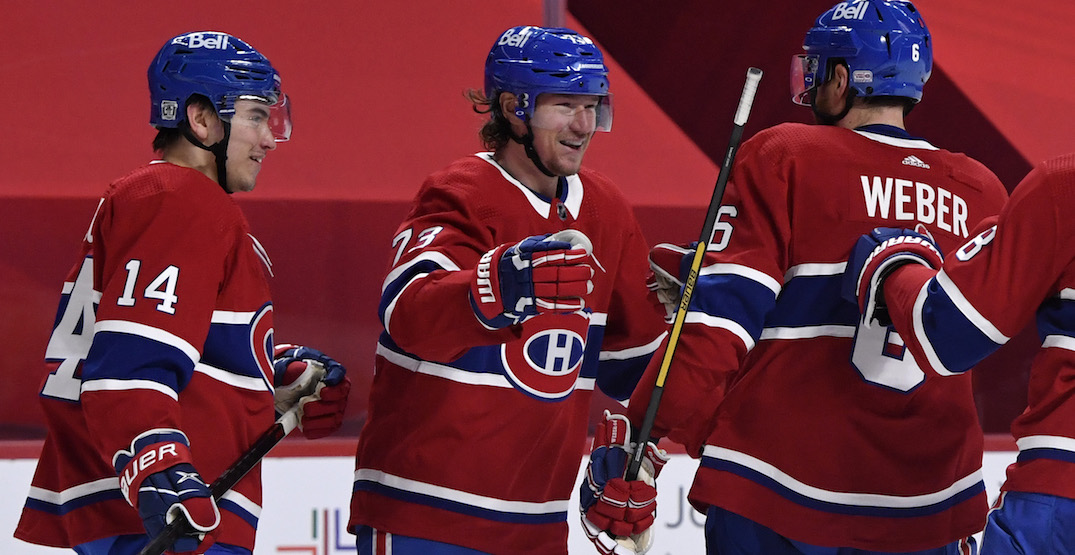 Even as their season was put on pause due to Jesperi Kotkaniemi and Joel Armia being placed on the COVID-19 protocol list, it still ended up being a newsworthy week for the Montreal Canadiens.

First, they acquired veteran centre Eric Staal from the Buffalo Sabres in exchange for third and fifth-round picks in this year’s draft. Then the team announced they’d signed 2019 first-round pick Cole Caufield to his entry-level contract after the winger tore up the collegiate ranks this year, scoring 30 goals and 52 points in 31 games for Wisconsin. Caufield will report to the AHL Laval Rocket after completing his quarantine and then will try to force his way up to Montreal.

It also ended up being a pretty good week for the Canadiens on the out-of-town scoreboard. After showing some spark in their first few games with Darryl Sutter back behind the bench, the Calgary Flames have begun to struggle again, losing five of their last six games. Meanwhile, the Vancouver Canucks got blown out on home ice twice in a row by the Winnipeg Jets.

The Habs may only be two points up on both the Flames and Canucks for fourth place in the North Division, but are in great shape due to the fact that as of Tuesday they have six games in hand on both teams. Winning their games in hand could even give the Canadiens a shot at moving up further in the division, but as far as just making the playoffs, they’re in a pretty good position. For what it’s worth to you, SportsClubStats.net gives the Habs a 96.3% chance of making the playoffs.

And if they do get there, they’re going to have a chance to do some damage. Here’s why.

A storyline of the Habs’ season has become their relentless failures in games that go past regulation. It began with their very first game of the season, a 5-4 overtime loss to the Toronto Maple Leafs, and didn’t stop until their most recent game, a 5-4 shootout win over the Canucks on March 20th.

Yes, the 10th time was the charm. They improved their shootout record to 1-3, though their record in 3-on-3 overtime is still 0-6.

Montreal is 13-8 in games that are decided in regulation this year, though, and won’t have to worry about 3-on-3 overtime or shootouts in the playoffs. More good news is that referees have a tendency to let a lot more go during the playoffs. It’s one of those unwritten rules of NHL officiating that Tim Peel reminded us of recently.

The reason that’s good news for the Canadiens is that they’ve been one of the best teams in the NHL this year at even strength. They’ve scored 59.1% of the 5-on-5 goals in their games this year, the second best rate in the league behind only the Tampa Bay Lightning.

They’ve also controlled the play at even strength better than anyone but the Colorado Avalanche. They’ve taken 55.5% of the shot attempts and 55.8% of the shots on goal at 5-on-5, both rates only trailing Colorado.

The Habs were already a team built on their depth up front. They got even deeper by bringing Staal on board.

No one’s under any illusions that he’ll be the player he was in his prime with the Carolina Hurricanes, but the eldest Staal brother was still a productive player over the last four years with the Minnesota Wild. He scored 47 points (19-28-47) in 66 regular season games — plus five in four playoff games — as recently as last year.

He wasn’t having a great year in Buffalo with just 10 points (3-7-10) in 32 games. Maybe his production went off a cliff at 36 years of age, or maybe the Sabres are such a toxic mess that it’s fair to give Staal a mulligan for his time with them. At the very least, he should bring more to the team than Jake Evans, whose spot in the lineup Staal seems likely to take.

The Habs still don’t have a real No. 1 centre, but they do have a tremendous amount of depth down the middle now. You could probably do worse than Staal as your fourth-line centre, if that’s the role he ends up filling.

3. Building off the bubble

The Canadiens arrived in the Toronto bubble last year as the final team to make the cut for the expanded 24-team postseason. They were expected to be little more than a warm-up opponent for the Pittsburgh Penguins before the real playoffs started.

Instead, the Habs stunned the Penguins and then gave the Philadelphia Flyers all they could handle. Though they lost the series in six games, the Canadiens’ four losses came by a total of five goals and they actually outscored the Flyers overall.

That’s only worth so much anymore, but the playoff experience that younger players like Kotkaniemi and Nick Suzuki got has some value, and the team’s relative success in last year’s playoffs could give them confidence heading into the postseason this year.