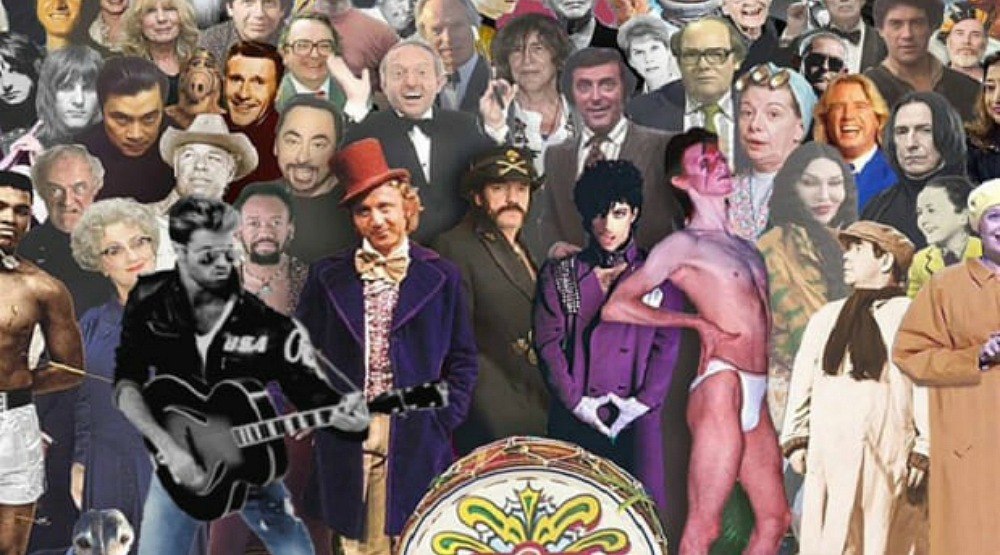 There’s no denying that 2016 has been brutal when it came to our pop culture idols. This has been a year that saw us lose some of our most talented musicians, performers, and wordsmiths, as Prince, Leonard Cohen, George Michael, and most recently Carrie Fisher all passed away. There were many more, of course, but these were the ones whose deaths affected me on a very personal level.

When artists who have marked the passage of time for you and have become either the soundtrack of your life or a pop reference you always go back to, die, a part of you does too. It’s not over-the-top or melodramatic to say so; it’s just the truth. It doesn’t mean you’ve crawled up in a ball inconsolable and unable to function, the way you do when someone close to you passes away, but the unmistakable weight of sadness is very real.

People who scoff at or make fun of people who mourn celebrities’ deaths miss the obvious. That it’s not just the celebrity we’re mourning, but everything their art represented for us.

I understand that for some people public displays of mourning (particularly for celebrities) may feel exaggerated and overblown. They may make them feel uncomfortable and awkward, as if they were watching something fake and disingenuous, but it’s not. Our mourning is real grief for time lost, for a past that cannot be retrieved or recaptured, for an innocence that can never be reclaimed again. When we mourn them, we mourn ourselves.

I’ve watched the social media comment trolls come out of the woodwork as they always do at times like this, to post the most inappropriate, cold-hearted, clueless comments on people’s threads. Someone posts about Prince and up pop the trolls talking about how he was a drug addict and that it’s no great mystery he died of an overdose. Someone posts about how much they loved George Michael’s music and up pop the attention-seeking trolls feeling the overwhelming need to tell his fans that the guy was “completely overrated” and all he made was “pop music, after all”, and “wasn’t the guy gay? So he died of AIDS, right?” Someone posts about Leonard Cohen and the trolls pop up like clockwork to share how “they weren’t really a fan” and how “in their opinion, Cohen wasn’t really a good singer” and how “they just don’t understand why anyone listened to him.”

You must be a deeply unhappy human being to feel such a need to disparage someone’s legacy at the time of their death, or to pop up on a thread comprised of die-hard fans in mourning, to share your unsolicited opinions about their talent or make bad jokes or word puns using their songs or films they acted in. Not only is it easy attention baiting, it’s utterly pointless.

While some people claim it’s a deliberate attempt to lighten the mood or take away from the sadness, I don’t buy it. There is something malicious and needy about the motivation to so effortlessly push people’s buttons and hog the attention. At the end of the day, someone’s parent, partner, child died. And the fact that they’re a celebrity and in the spotlight shouldn’t give you free license to be a flippant jerk about it. You didn’t care for them? Here’s a solution for your dilemma: say nothing.

Then there are the self-important folks who designate themselves as arbitrators of what constitutes appropriate levels of public grief, the ones who mock the public’s reaction as over the top and mawkishly sentimental.

It’s been well over 5 years since Canadian politician and leader of the NDP Jack Layton passed away, but I remember the country’s grief at his death like it was yesterday. Another thing that I remember well, were two columns written at the time by the National Post’s Christie Blatchford and Barbary Kay, questioning this outpouring of grief. With unwarranted cynicism, Blatchford called the vigils a “public spectacle”, while Kay, referring to the public displays of mourning as “teddy bear grief”, insisted they were inappropriate and disproportionate, silly and unbecoming.

Forgive me, but who exactly appointed these two as purveyors and adjudicators of what’s appropriate? Their insinuation that they were somehow the “cooler heads that prevailed”, as mass hysteria gripped the simpletons – who can’t possibly know better – annoyed me greatly, and still does today when I see the same attitude displayed or implied in comments on people’s threads.

In a world rife with cynicism and ugliness, where image after image on our screens often reeks of hopelessness, there is something so achingly beautiful about grieving art and how it touches us.

To cry over someone who has given us so much joy throughout our lives, or whose music or words are so interwoven with our existence, our past, and our memories, is not trivial or superficial. It’s the most human thing there is.

Yes, I’m well aware that Wham! was a silly pop band with silly lyrics, but when I listen to them I am immediately transported back to being a young teenager who hadn’t yet felt life’s great joys or losses, who hadn’t fallen in love, been burned by love, hadn’t seen a byline, hadn’t seen her first wrinkle, hadn’t buried her father, didn’t yet understand how fast time goes by and what it takes with it.

It’s a privilege to be an artist who affects people in such a way. To be someone’s refuge and escape in hard times, to be someone’s way of expressing joy, to be the soundtrack to their lovemaking, the wallpaper to their rooms, their pop culture references, that movie quote that everybody gets, that lyric that breaks everyone’s heart, to be the people in the limelight who stand up and say it’s ok to be different, ok to suffer from a mental illness, ok to be gay, ok not to comply with societal expectations of what a woman or a man is supposed to behave like, to help us make sense of our world.

To mock that or to mock people’s sadness at how art affected them is myopic and self-centred. You don’t need to understand someone’s grief; you simply need to respect it. Take it from someone who remains silent when celebrities she feels no emotional connection to die, it’s pretty painless. You should try it sometime.