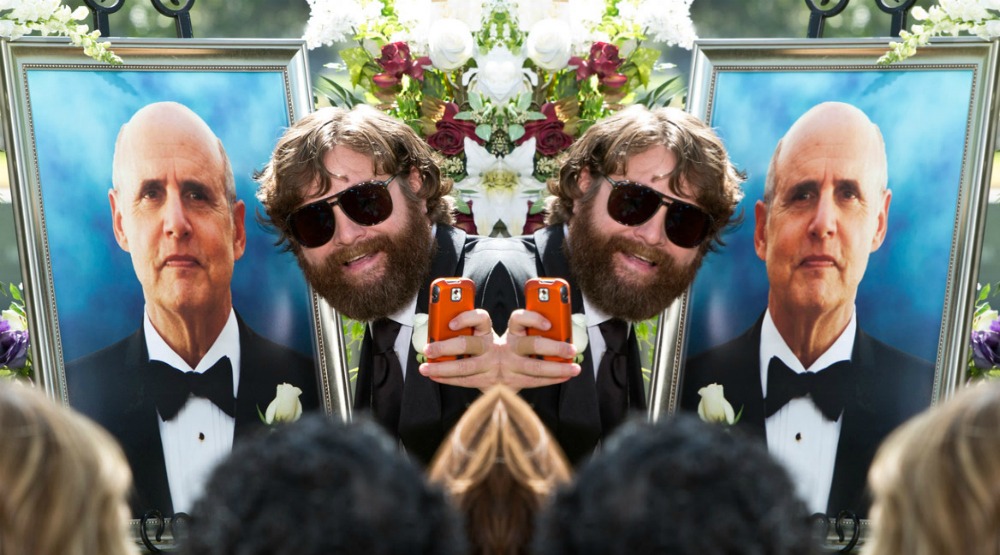 I never thought I’d be writing about something like this, but if there’s anything I’ve learned over the course of more than a decade of writing columns and opining on stuff, is that the news can and will surprise you.

Cue to me waking up a few days ago and coming across an article about how we need to stop taking funeral selfies. Say what? It turns out that snapping selfies at funerals is apparently a thing in Quebec, increasingly becoming so much of a problem that we need to be told to stop taking them and posting them on social media.

During a radio interview with Radio-Canada’s Gravel le Matin, later shared in a CBC article, Denis Desrochers, president of the corporation of funeral directors of Quebec, was quoted as saying that there’s currently a debate going on “over how to educate people about what is respectful behaviour at a funeral parlour.”

Seriously? We need etiquette classes to teach us that taking a selfie with a dead body and then posting said selfie on social media for all to see might be tacky, tasteless, and unbelievably insensitive to the bereaved?

I did a little digging (no pun intended) because this story baffled me. I wanted to understand what in the world is going on, who the culprits of this latest “trend” are, and how they justify it as being ok.

It turns out that it’s definitely not exclusive to Quebec. Funeral selfies are apparently popular around the world because thoughtless jerks are apparently a global phenomenon. In a survey conducted by the UK’s The Telegraph, nearly 2,700 British adults who had attended funerals in recent months were asked to declare if they had taken a selfie of themselves during the memorial service.

One third of mourners admitted to taking selfies at funerals with a majority admitting to posting the image online to garner sympathy. Less than one third of those who had posted a funeral selfie online did so to remember the day.

In fact, they’re so popular that there’s even a Tumblr account dedicated to this ridiculous practice. Selfies at Funerals compiles the most absurd, shallow, self-centred images you’ll ever come across. If you’re allergic to selfies in general, you’re really going to have a problem with these. People posing with a combination of faux-sad faces and frown-duckface lips, while trying to catch the most flattering light in the funeral home, and adding inane hashtags like #funeral, #longday, #RIPauntTookie, #instagood (really?), and #family, to add insult to injury. A special mention to the teen girl who wrote “Love my hair today, hate why I’m dressed up.” Yes, I’m sure the dead person lying in the coffin somewhere behind you is appreciating the sentiment and the volume in your hair.

It’s not unsurprising that the vast majority of people committing this ghastly act are young. The Telegraph survey revealed that 48 percent of those who said they had snapped a funeral selfie were between the ages of 18-25. That, however still leaves the other 52 percent who should be way too old for this tacky nonsense.

Since this story first appeared people have come forward to say that we shouldn’t be too critical and that if we had had smartphones when we were younger we would have also done things we’d now be ashamed of. I look back at my teen years and secretly thank dumb luck for not providing more ways for me to embarrass myself, but I can assure you that a funeral selfie would have never ever made it on my list of things to regret, and if, when the day comes that I die, you attend my funeral and decide to take a selfie and post it on social media I sincerely hope your smartphone bursts into flames and burns your eyebrows off (Relax… they’ll grow back, it’s not at par with the Curse of the Pharaohs).

Even as a self-absorbed (we all are at that age) 15-year-old I would have never in a million years thought it ok to be so thoughtless and callous about someone’s death and so indifferent to a family’s mourning. There’s a serious disconnect here somewhere that allows for something like this to take place, and I don’t know if it’s the constant desire for online validation (nothing ever happens to you unless you post it online) that teenagers in particular are experiencing, or this inability to distinguish between reality and reality TV. We’ve become so desensitized by what we see and hear around us that I sometimes feel we don’t react the way we’re supposed to when real life happens.

Of course, I also understand that many of these kids posting these silly selfies are bored teenagers probably dragged out to an old person’s funeral. They have no real emotional connection to this distant relative; they’re at an age where even someone passing away at the young age of 60 feels ancient and a long life to them, so they feel no need to mourn what doesn’t affect them. But this lack of empathy for others’ grief is highly disturbing to me.

Some have also rushed to explain that taking funeral selfies is a way for people to grieve, and some point to the fact that they’re actually established traditions in some cultures. Let me make it very clear that grief is a complicated process and people choose their own way out of it. Customs do vary from culture to culture. The difference, however, in these cases, is that photos are taken to remember and honour the deceased, to perhaps have something tangible and final to look at that helps you navigate your grief. The ones I’m referring to are the exact opposite.

Taking a smiling selfie in front of a casket to post on Instagram for your followers to later “like” is simply disrespectful and tacky, and one shouldn’t have to tell you that at any age. You should have already figured that all out on your own, dumb-dumb.