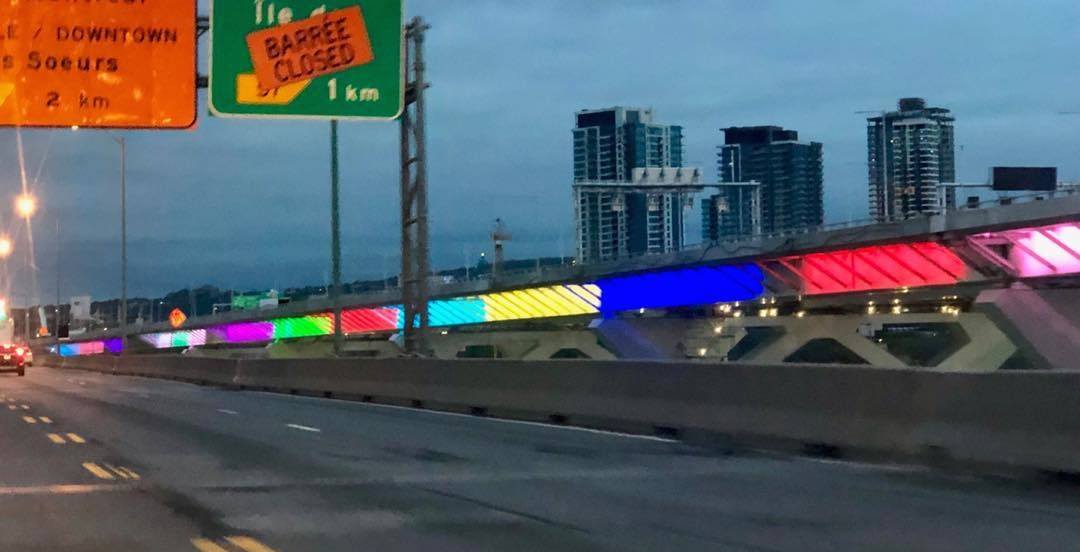 It looks like the illuminated Jacques Cartier Bridge will have some competition as the Nouveau Pont Champlain has been lighting up the city’s skyline.

The new bridge, officially known as the Samuel de Champlain Bridge, features an under-deck lighting system that can light up to a variety of different patterns.

Imagine how it might look when the Habs make the playoffs?

“We are currently installing the architectural lighting under the structure, on the south and north corridor of the Samuel de Champlain Bridge and 80% of the installation is complete,” Annie-Claire Communication Manager of the Nouveau Pont Champlain told Daily Hive. “It consists of 7,500 lights under the bridge, which can display an array of different colours. Tests take place periodically during installation.”

With the last segments in place, the $4.2-billion Samuel de Champlain Bridge is now almost complete, spanning the entire 3.4 kilometres between the South Shore and Montreal.

The lights, which are visible up close from the old Champlain Bridge, are in place to highlight the architectural features of the new bridge.

“Since the beginning of the project, architectural lighting is part of the requirements included in the partnership agreement with the Government of Canada,” concluded Annie-Claire. “Costs associated with the lighting operations are included in the overall project budget.”

The new Champlain Bridge, which has an expected lifespan of 125 years, is slated to open to traffic in June, though a specific date has yet to be officially announced.