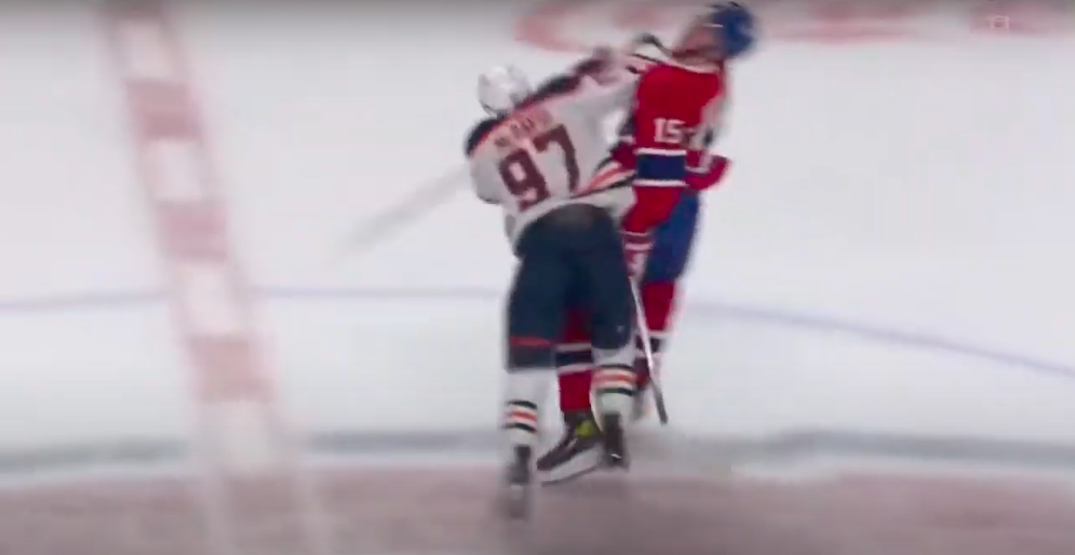 Edmonton Oilers star Connor McDavid has been fined $5,000 for his hit during the Oilers game against the Montreal Canadiens. The fine is the maximum allowable under the current CBA.

Edmonton’s Connor McDavid has been fined $5,000, the maximum allowable under the CBA, for Elbowing Montreal’s Jesperi Kotkaniemi.

The play occurred in the first period after the Oilers were already down 3-0 when McDavid laid into Canadiens forward Jesperi Kotkaniemi at centre ice with an apparent high elbow.

McDavid was given a two-minute roughing penalty for the play, and the Oilers would end up losing the game 4-0. Kotkaniemi was uninjured on the play.

The former Hart Trophy winner and current NHL points leader, McDavid had an unusually quiet night otherwise. He had no points, was a minus two and was held without a shot on goal for only the second time this season.

Both McDavid and Leon Draisaitl have not scored a goal, only have three points combined, in four games against Montreal this season.

McDavid’s hit is the talk of social media, as Habs fans are not happy, arguing that he should be given more than just a fine.

Absolutely joke, it’s a suspension all day if McDavid isn’t a superstar

It’s a dangerous and stupid play by 97. Clearly he did it out of frustration but he shouldn’t be immune to discipline. Rules need to be applied evenly and consistently. Unfortunately because he is 97 the league will do anything to protect him and justify this type of play.#stupid

High elbow, get him out of the game and at least a 5 game suspension. I don’t care if another angle makes it look “not as bad”, he goes into that raising his elbow. Brutal and no room for that crap.

Blatant hit to the head. Doesn’t get more clearer than this. Kk didn’t lean into it none of that. Mcdavid had intent to elbow him in the head

Head shot. No discussion needed. KK got hit earlier this year vs Calgary by Dube and my boys went nuts. I disagreed with most #Habs fans on the Dube hit. This one is clearly a head shot

I don’t care who it is, that was stupid and blatant. You have to call what happened, not who the player is, or the cause. The refs have no choice.

Clear cut head shot. Went after him without the puck. It’s interference, elbowing, targeting. Should’ve been a 5 min major, and should get a suspension. But it’s McDavid. So they call their 2 minute roughing minor and won’t even call him in for a suspension.

You know the NHL Player Safety department and their decisions on player discipline are flawed when if Tom Wilson were to do that to Jesperi Kotkaniemi he would have gotten 5 games minimum but Connor McDavid does it so only a fine and no suspension there. That’s a problem.