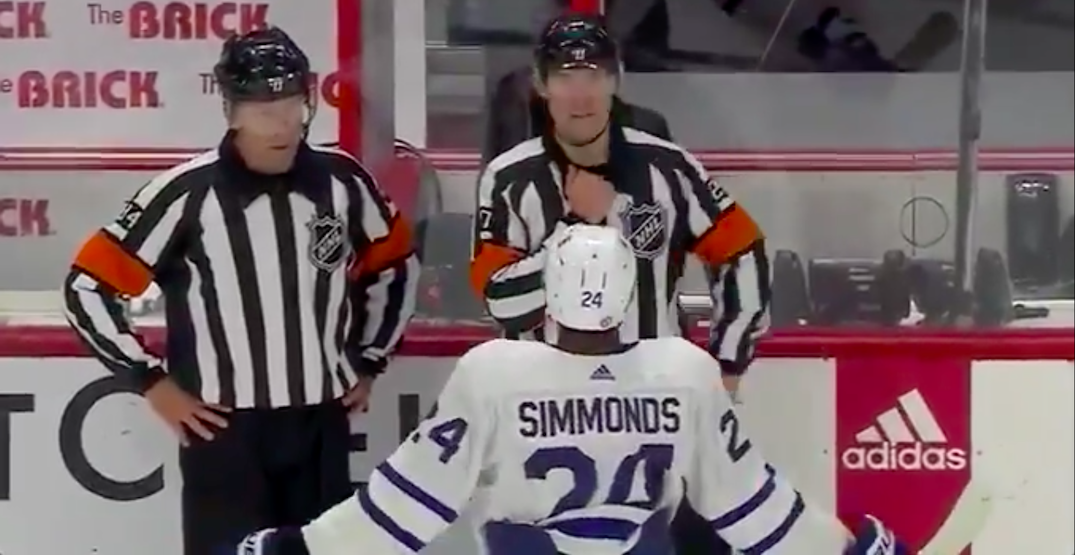 After Tim Peel was relieved of his duties following comments caught by a hot mic, it appears that NHL referees are no longer taking any risks when it comes to on-ice microphones.

During the Toronto Maple Leafs’ 3-2 overtime win against the Ottawa Senators on Thursday, referee Eric Furlatt was seen talking to Leafs forward Wayne Simmonds regarding a non-call made in the game.

As he was talking to Simmonds, Furlatt placed his hand around his collar, covering his microphone.

Here’s a clip of the non call on Simmonds and the ensuing covered-mic conversation pic.twitter.com/4MmXSbKCKj

This follows Peel’s incident, which happened a couple of days ago and saw the veteran referee get caught on a live mic saying that he “wanted” to give a penalty on the Nashville Predators in their game against the Detroit Red Wings.

Maybe if you're a mic'd up ref, you shouldn't express how you wanted to call a penalty against a team earlier in the game, changing how you ref the rest of the game.

"It wasn't much but I wanted to get a fuckin' penalty against Nashville early in the…"#Preds #LGRW pic.twitter.com/6fZImkdqLr

“It wasn’t much, but I wanted to get a fuckin’ penalty against Nashville early,” Peel was caught saying during the television broadcast of the game, right before a commercial break.

The NHL responded quickly, announcing that the 54-year-old Peel will “no longer will be working NHL games now or in the future.”

“Nothing is more important than ensuring the integrity of our game,” said Colin Campbell, NHL Senior Executive Vice President of Hockey Operations, regarding the incident. “Tim Peel’s conduct is in direct contradiction to the adherence to that cornerstone principle that we demand of our officials and that our fans, players, coaches and all those associated with our game expect and deserve.”

“There is no justification for his comments, no matter the context or his intention, and the National Hockey League will take any and all steps necessary to protect the integrity of our game.”