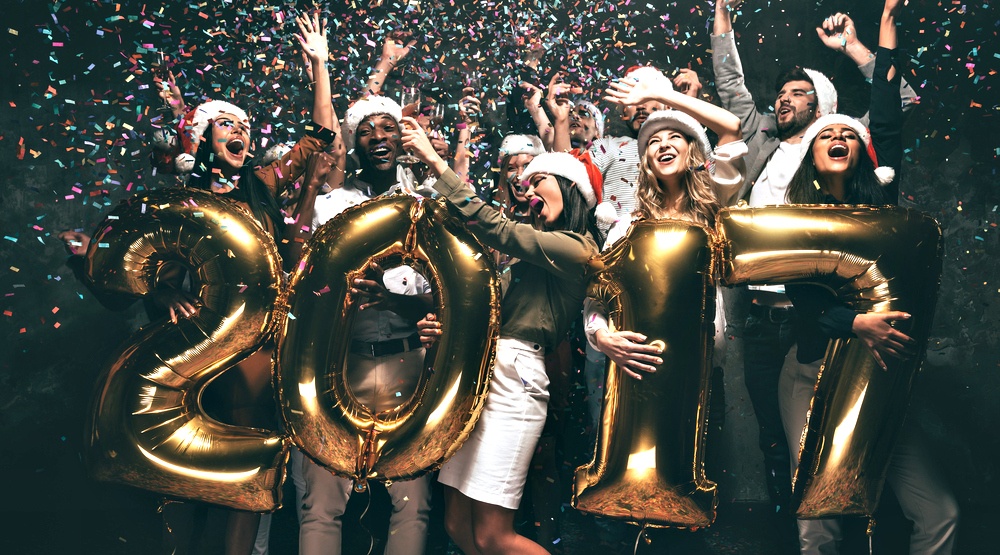 NYE is upon us! Time to exchange the tinsel for sequins and plan the ultimate night to ring in 2017.

After a bit of a rough here, it’s safe to say that Montrealers need an awesome New Year’s Eve more than ever.

Whether you’re scoping out the city’s hottest parties, or looking for something a little more low-key, we’ve got you covered.

From ballroom bashes to comedy nights and jazz clubs, check out 33 things to do on NYE in Montreal.

Montreal’s favourite comedy club is hosting an awesome New Year’s Eve event that is guaranteed to have you laughing into 2017. The December 31st act is none other than Jamie Lissow, a comedian who has been featured on The Tonight Show, Last Comic Standing, and the Netflix series, Real Rob. In addition, the Comedy Nest will provide guests with party favors, a complimentary glass of champagne, and gourmet sandwiches and desserts.
When: December 31, 10 pm
Where: 2313 Sainte Catherine Street West, 3rd Floor

Want to keep it casual and fun? Then this is your jam. Join this NYE house party in the New Old Montreal with DJ Kelly Nunes, beer pong, and whole lot of good time as only Santos know how to do.
When: December 31, 8 pm
Where: Santos

All you need to know is that the club will be covered with gold balloons, entry is $25, and you can buy a bottle service for $10,000! Don’t worry other options are obviously on the menu but this party will be off the chains. If a modelling agency is involved, you know the crowd will be top notch.
When: December 31 31, 9 pm
Where: École Privée, 1 Rue Milton, Montreal

As part of Merry Montreal, Old Port is throwing the biggest bash of the night. The event is sponsored by Coca Cola and will be 100% free. Festivities will begin at 7pm sharp and will include a DJ, main show, New Year’s countdown, fireworks at midnight, and a dance party that will go until 2am. It’s going to be quite a night.
When: December 31, 7pm
Where: Old Port and Place Jacques Cartier

An exciting dance party on St Hubert that is not to be missed! Featuring music from warm and tropical regions like South America and the Caribbean, get ready to for a night of salsa and merengue.
When: December 31, 9 pm
Where: Nestor Bar Private Lounge, 2nd Floor, 6289 Rue Saint-Hubert

Saint Laurent’s Muzique is set to be transformed this New Year’s into a glittery paradise complete with red carpet, themed rooms, and flowing booze. Plenty of special VIP packages are available.
When: December 31, 8:30pm
Where: Muzique, 3781 Boulevard Saint Laurent

The Coca-Cola New Year’s Party is sure to be completely spectacular this year. Kicking off the celebrations of Canada 150, the event will gather some of the country’s most prominent artists on a huge outdoor stage. The night’s breathtaking show will culminate on a countdown to midnight, followed-up by fireworks. The last night of 2016 promises to be a vibrant and unforgettable one. Did we mention it’s free?
When: December 31, 7 pm
Where: Quais du Vieux-Port de Montréal, Montreal

This unforgettable New Year’s party treats guests to three stages: a 5-course meal made by chef Devon Latte, a midnight celebration featuring champagne, oysters, and a heated terrace, and finally, the partying portion which includes an in-house DJ and bottle service.
When: December 31, 8pm
Where: 1101 Rue Bleury

The fun doesn’t stop at Montreal’s Olympic Village this New Year’s. Their resident winter carnival, Village Mammouth, continues right into 2017, but for one night only Olympic Village will be throwing a major New Year’s Eve bash. Slated to be the party of the year, the event will feature three international DJs, special effects, food trucks, and a mesmerizing New Year’s countdown. As an added bonus, the event is totally free!
When: December 31, 6 pm
Where: Olympic Village

Guests will be greeted with a chic bar, lively dance floor, themed decorations, party favours, and more. In addition, the club features 2 dance floors, 3 bars, and 8 bartenders.
When: December 31, 10 pm
Where: 1458 Crescent St

Ring in the new year by getting active on Mount Royal. Though the event isn’t technically on New Year’s Eve, the idea is to “kick off the year with a bang and toast the splendours of our city.” The rek is $22 per person and includes snowshoe rentals and a glass of bubbly.
When: December 30, 6 pm
Where: Beaver Lake Pavilion

Hosting an all-inclusive open bar party since 1999, Saint Laurent’s Club Soda is a Montreal institution. No need to worry about tipping, enjoy a night of free drinks ranging from spirits to cocktails.
When: December 31, 9pm
Where: Club Soda, 1225 Saint-Laurent

Are you an EDM fan? Ile Soniq presents Ceremonie, the New Year’s Eve EDM party of your dreams. Taking place at Theatre Berri, this non-clubbing event will keep you dancing all night long with your fellow music lovers. There will be two sets, one featuring Dirty Audio, Kayliox, and Tibe, and other other starring Jason Ross, Sheridan Grout, and Eagle I Stallian.
When: December 31, 9 pm
Where: Theatre Berri, Cégep Du Vieux Montréal, 1280 Rue Saint-Denis

NYE Enchantment Under the LAB

With the theme of “Back to the Future Tux & Prom Party,” you’re guaranteed to have a blast at Montreal’s Le Lab in the Plateau. Each ticket guarantees you entrance, three cocktails from their special New Year’s Eve menu, some bubbly for the countdown, and alcohol-infused treats.
When: December 31, 9 pm
Where: Lab, Comptoir à Cocktails, 1351 Rachel Street East

Enjoy the VIP treatment at Montreal’s own Club Facul-T. There will be a live countdown, balloon drop, and champagne toast. The event also features 5 DJs, a laser show, and an impeccably decorated dance floor.
When: December 31, 10 pm
Where: 3556 Boul St-Laurent

Head to Montreal’s iconic L’Olympia Theatre this New Year’s Eve for the gypsy punk show of your dreams. Presented by Osheaga, doors open at 9pm with the show beginning at 10pm. Tickets start at $53.75 or can be bought on the day of the show for $63.75
When: December 31, 10 pm
Where: L’Olympia, 1004 Rue Sainte-Catherine E

For the fifth year in a row, Chateau St-Ambroise is hosting one of the most exciting New Year’s events in the city. Located in trendy Griffintown, party-goers can expect an open bar, DJ CRK, and a room of guests dressed to the nines.
When: December 31, 10 pm
Where: Château St-Ambroise, 4030 St-Ambroise

The Société des arts technologiques’ Satosphere dome is home to their annual New Year’s Eve party. Though there will surely be dancing and the typical mix of techno and house DJs, you will also get to celebrate New Year’s in one of the coolest venues in the city. Tickets start at $35.
When: December 31, 9 pm
Where: SAT, 1201 Boulevard Saint Laurent

Offering a slightly more intimate NYE setting, Rendez-Vous will have an open bar from 10pm until 3am, party favours, a balloon drop at midnight, and DJs playing everything from house and EDM to hip hop.
When: December 31, 8 pm
Where: Rendez-Vous, 3565 Saint-Dominique St.

Love Old Port but aren’t into crowds? Perhaps skating at Montreal’s Natrel Skating Rink is perfect. With the beautiful buildings of Old Montreal in the background, you can skate the night away under the stars (and fireworks).
When: December 31, 11:30 am, 2 pm, 4:30 pm, 7:30 pm, 10 pm
Where: Old Port

Boasting three different party styles to ring in 2017, the Hyatt Regency is hosting a massive NYE gala on December 31st. There will be a multiple-course dinner, dancing, and several VIP packages available. Don’t miss out on this classy event.
When: December 31, 8 pm
Where: Hyatt Regency Montreal, 1255 Rue Jeanne-Mance

The hippest industrial club in Montreal, Le Cinq, is hosting yet another NYE bash. There will be three party rooms, 6 DJs, music of all genres, a confetti and balloon drop at midnight, and a projection of the ball dropping in New York City.
When: December 31, 9 pm
Where: Le Cinq, 1234 De La Montagne

In the heart of the city’s nightlife district, you’ll find Jet Night Club. Boasting a world-class open bar service, 14 bartenders, 3 party rooms, and 2 levels, the event promises to be one for the ages. The venue will be decked out from head to toe in glittery decorations, there will be party favours and a ball drop, and a live screen showing the ball dropping in Times Square.
When: December 31, 8pm
Where: Jet Night Club, 2020 Crescent