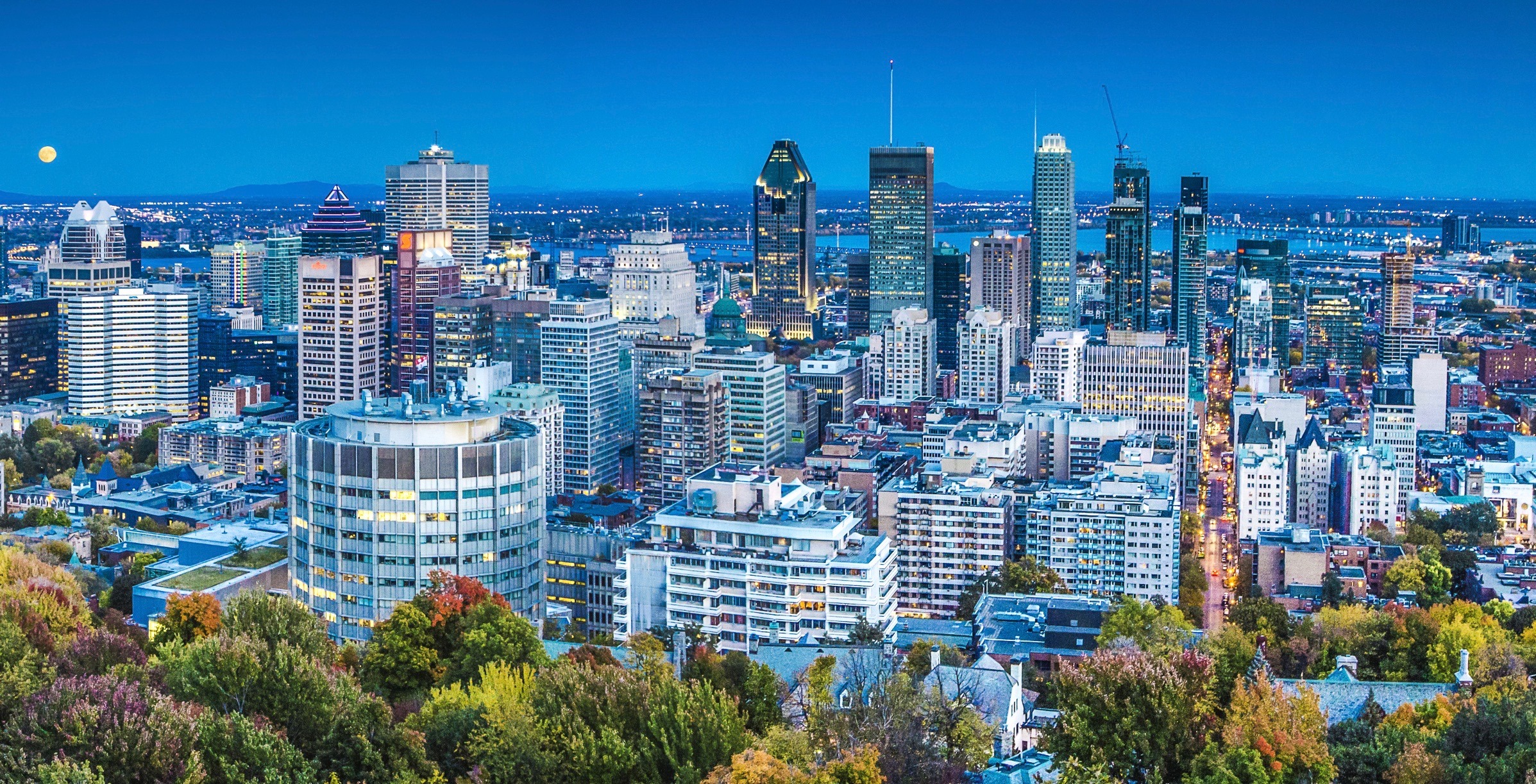 As the summertime clock begins to wind down, being a student in Montreal kicks into high gear.

But don’t worry, Montreal is an awesome city to be a student in.

In fact, with 11 universities and 180,000 students, Montreal has the highest concentration of post-secondary students of all the major cities in North America, with 4.38 students per 100 residents, according to an ‘Attractiveness Indicators’ survey.

While you may be on your way here, here are 17 important things you need to know before moving here. 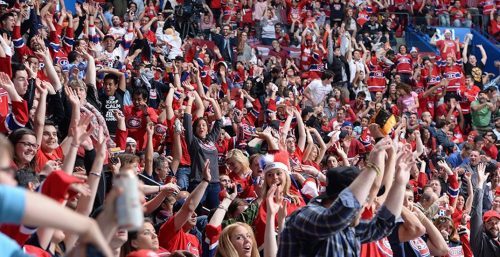 Montreal is the mecca of hockey and being a Canadiens fan is like a religion. Even if you don’t like or follow hockey, it’s hard not to keep track of how the Habs are doing.

Come October, the entire city is talking about them. It’s the go-to conversation starter for every social occasion. Do yourself a favour and brush up on a bit of Canadiens knowledge, just so you’re not “that person.”

2. Speaking French will help, but it’s not a deal-breaker

Montreal is the second-largest primarily French-speaking city in the world, next to Paris. The downtown core, however, speaks both English and French. Sure, the French language is everywhere (signs and laws) but it’s not a deal-breaker.

Master the basics as a form of respect and politeness: Bonjour: hello, toilette: restroom, merci: thank-you, and une autre bière s’il vous plaît: another beer, please, should do you just fine, to start. 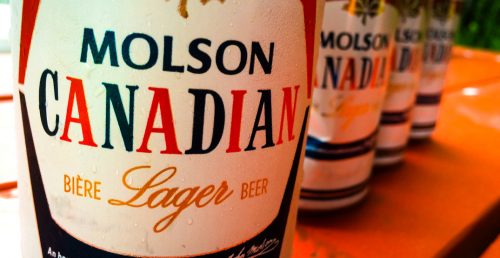 Speaking of beer, you can purchase it everywhere. Besides liquor stores, beer and wine are sold at grocery stores, depanneurs, and gas stations from 7 am to 11 pm and the legal purchase age is 18.

Despite being convenient and easily accessible the aforementioned stores (for the most part) have a good selection of products and are relatively cheap: A 24 of local beer ranges from $25 to $30.

Don’t say ‘convenience store’ — that sounds like a trendy new bar in The Plateau, not somewhere you’d go when you need milk, bread, and a six-pack.

Along the same line (literally), our underground subway system is referred to as the metro, not the subway.

Construction in Montreal is a constant struggle. If you’ve never been to the city before, we’d recommend doing your due diligence before heading out.

Roads, highways and streets are often detoured and diverted without notice. Leave early to ensure you’ll get wherever you’re going to on time, especially class. Also, watch out for the potholes, they’re lethal.

6. Parking is a whole thing

Similarly, plan ahead if you’re going to park downtown. The constant construction minimizes parking spots, there are a few gems to be found and be sure to download the P$ Mobile Service app so you can cover your parking costs from a distance. 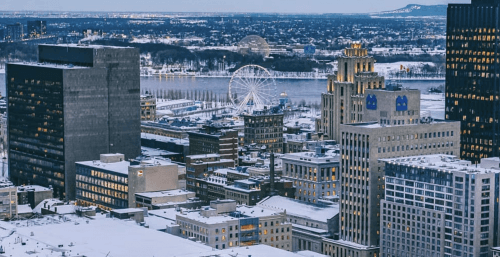 We don’t care where you’ve lived in Canada, Montreal is right up there (actually down there) when it comes to winter temperatures. This isn’t a tropical island location, it’s a welcome-to-a-French-winter icebox situation. That said, we still love it (see point #3).

The city embraces the cold and you should too, it’s all part of the charm. The city offers tons of winter carnivals, events, and activities. As long as you have a warm coat, tuque, gloves, scarf, and boots you’ll be fine.

8. You can’t turn right on a red light – anywhere

It is illegal to turn right on a red light anywhere on the island of Montreal. So, don’t even try it or you’ll get a nasty ticket. Right on red is sparse in the rest of Quebec and it’s always notified by a sign if you can or not, pay attention.

Most bars and restaurants offer a 5 à 7 deal on weekdays which is our version of happy hour. It varies per bar and is most definitely not limited to two hours. Plenty of spots have a 5 à 7 that lasts from 4 pm to 8 pm, meaning you’re getting a deal on beer, wine, cocktails, and sometimes even free snacks as the work hours (and the sun) dwindles down.

Bars, restaurants, and nightclubs start kicking people out at 3 am and last call happens 15 minutes prior. Some spots are a bit more lenient in terms of when you actually have to go, but don’t become “that person” until they’re comfortable with you.

11. Be careful of the bikes 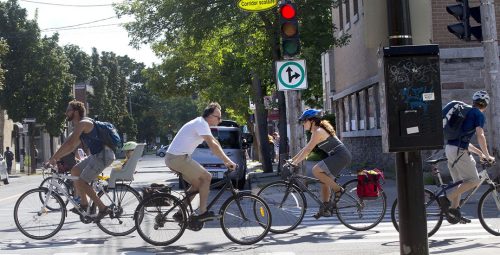 Montreal has an extensive and impressive bike path network. We have kilometres worth of bike paths that are separated from motorists but you still have to be mindful of them when you’re turning. Check your blind spot for other cars and then once again for bikers. They’re quiet and can sneak up on you quickly without seeing them.

12. All the signs are French

Just because a sign is written in French doesn’t mean they won’t speak or deal with English. The majority of places downtown speak both languages.

Street vendors aren’t allowed in Montreal. So, no streetside pretzel but we make up for it with food trucks. Various boroughs in Montreal have food truck parties and the food is delicious. You can find the food truck schedule on the Ville de Montreal website. 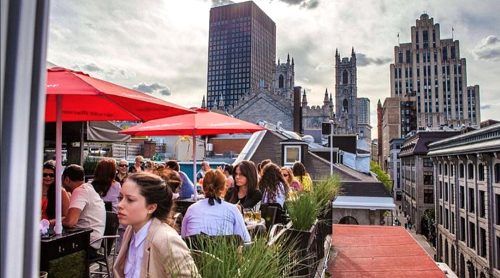 If you and your new school friends want to hook up for a few drinks and a meal outside, there’s plenty of opportunities, especially downtown. But, we call them terraces, not patios. Start throwing around words like ‘depanneurs,’ ‘terrace,’ and ‘5 à 7,’ and people will think you’ve been here for years.

If you’re about to sign or lease for a new place, understand that they run from July 1 to July 1. Canada Day in Montreal shares a date with what is known as Moving Day.

The province gets pretty hectic on Moving Day, so we’d recommend planning ahead. Rent vans, movers, and painters well before the first of July. 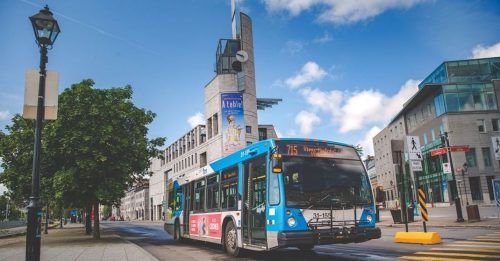 Public transit in Montreal is a joint network called the STM (The Société de transport de Montréal) between the bus and metros. Single-ride tickets cost $3.50 and can be used as a transfer from the bus to metro and vice versa.