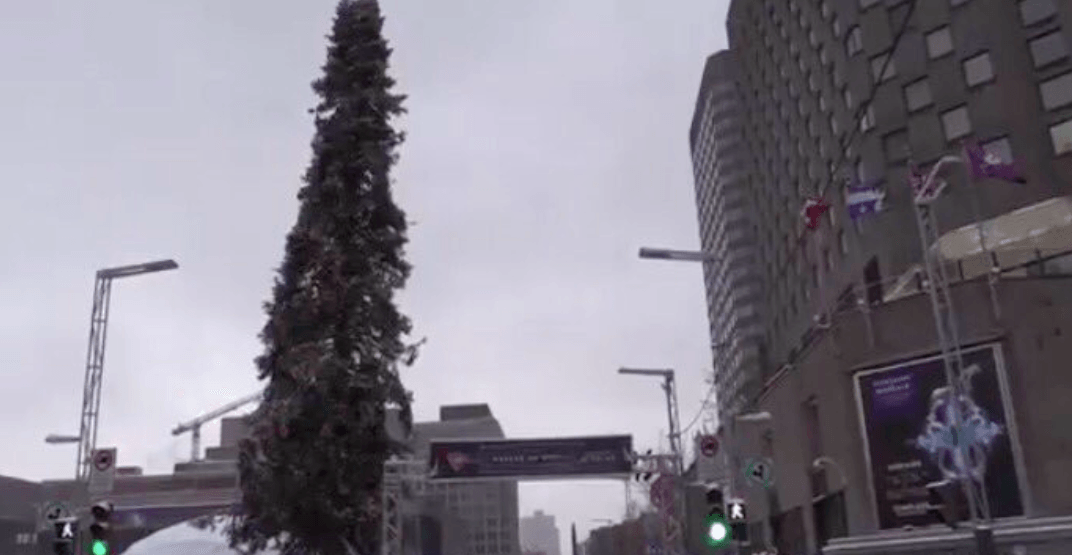 Montreal’s ugly Christmas tree is coming back for the holiday season.

Last year, Montreal’s 88-foot balsam fir Christmas tree made a lasting impression for being lopsided and a tad too skinny. As a result, it became a symbol of Montreal’s sad attempt at a Christmas spectacle.

if you thought montreal couldn’t get any more embarrassing, this is the tree we have downtown to compete with ny’s rockafeller centre tree pic.twitter.com/TrPFPyadDt

Montreal’s Christmas tree looks like it was just released from Xmas tree rehab and needs any spare change you might have for a bus ride home pic.twitter.com/DbcHdy28M6

To pay homage to last year’s lacklustre tree, another one will be decorated in its honour.

This year’s ugly tree is much smaller (only 20-feet) and will be installed at Prince Arthur Street.

You’ll also be able to take all the selfies your heart desires as a selfie-stick and a large spring of mistletoe will be installed near the tree for some cheeky holiday fun.

The tree is part of the Ugly Christmas Tree Village, taking place from November 24 to December 23.

“After installing the world’s most famous Christmas tree on Place des Festivals last year, Sapin MTL will erect a special tree that will be much smaller in size (20 feet rather than 88 feet …), but that promises to be just as endearing!” event organizers stated in a release.

Where: On Prince Arthur Street East, between St-Laurent Blvd. and Laval Avenue