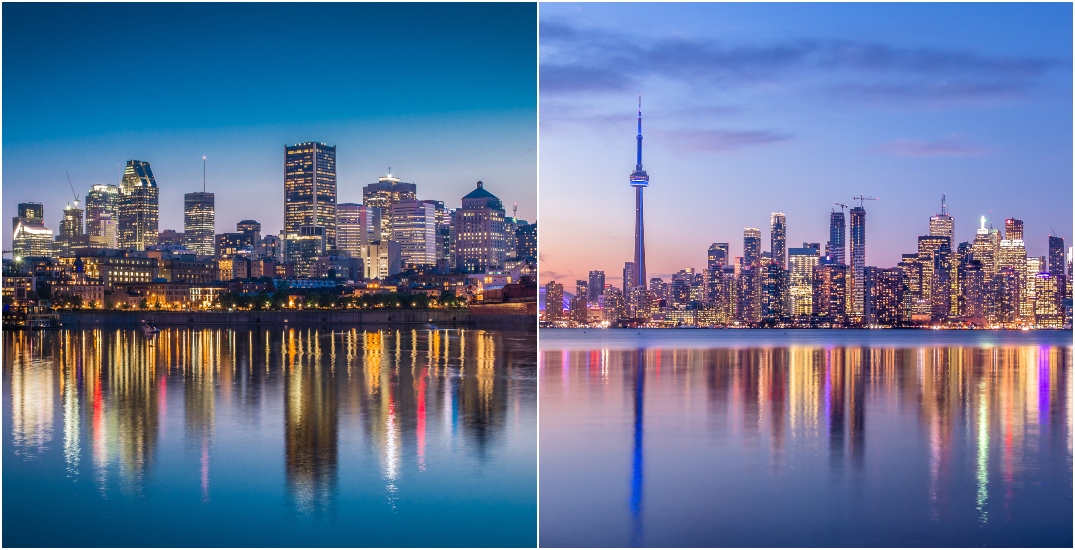 Ah, the timeless “which is better” debate between Montreal and Toronto.

The two popular Canadian cities can go toe-to-toe until the end of time.

Earlier this week, a debate on Reddit broke out between Canada’s two most populous cities, specifically about Montreal and Toronto’s look.

The post, initiated by Reddit user u/davidliu1007, asked, “why Montreal looks better than Toronto and feels more approachable” and a debate about the two cities ensued.

“I understand that ‘looking good’ is a very subjective thing, but after living in Toronto for a while and coming back to Montreal, I have to say that Montreal just looks better and feels more approachable, for some reason,” asked u/davidliu1007. “Anyone feels the same? What would be the possible reasons behind it? Is it because of the architecture? Green space? Longer history?”

Here are some of the debates most upvoted reasons why Montreal is better than Toronto and vice-versa:

“We followed the European model, they adopted the American model of a city. And it shows.

Density by default. Toronto grew so fast and they didn’t zone correctly so now most of their downtown and surrounding areas are single family homes. Montreal had the foresight to make sure that new developments even in boom times were duplexes, triplexes and up. That means a lot more of us are crammed into the city, but also that more businesses are viable because of the population density so it isn’t all just Shoppers’ and Rexalls.” – u/toin9898

” Montréal also tore down entire neighbourhoods in the name of urban renewal. Place des arts, for example, used to have two streets running through it that was all housing. Montréal simply kicked them out and razed it.” – u/LuangPrabangisinLaos

“My Toronto-born wife and I talk about this often. Torontonians have almost a Northern European disposition. Quite cold and not very friendly. I cannot say the same of Montreal. People seem very outgoing there.” – u/Jstef06

“It’s the people. Toronto is a city where everyone across the country ends up for work/university/immigration. Montreal as well, but to a much lesser extent, and people tend to be here because they like it here, and strive to make it desirable. It’s a community rather than a workplace.” – u/thewolf9

“I’ve lived in Toronto for 4+ years and there is certainly a sparkle to it that I don’t think most people get to see .

I think it’s all a bit relative. Like any city you need to feel out the different areas and see what fits your lifestyle. The neighbour hood I live in in Toronto is full of community , local shops, parks and older homes. It’s my favourite thing to finish work in the summer go for a walk and have a drink in the park.” – u/moonlight_lady-01

“People forget that Toronto is actually several different ‘cities’ dressed up in a trench coat.” – u/jperras

“90% of people in Montreal haven’t explored outside of the downtown financial and tourist core of Toronto. They also have been repeating the same stereotypes for 60 years without realizing that Toronto has changed since then. This reason for this is nobody has been there for more than a few days because they think or sucks but it just requires some exploring and an open mind. Lots of cool shit to see there.” – u/EnvironmentalMix3995

“Walk around in any part of Toronto just doesn’t give you that same feeling of wandering around in Montreal. I’m not only talking about Le Plateau, Old Port, Ste. Catherine, Bishop Street, etc… Just pick any streets in downtown Montreal and it feels so enjoyable to walk around, just sight seeing and casual shopping in all kinds of interesting boutique shops.” – u/davidliu1007

“Toronto gives me a soulless humans stacked on top of humans vibe. Montreal has more culture and flavour and cool cozy neighbourhoods.” – u/ashtonishing18

“As an Albertan i find Toronto people have the personalities of wet towels. And I’ve met many. Growing up next to the French quarter in Edmonton I knew a lot of kids from Montreal. They fit in good in Edmonton and I made some great friends.” – u/GKurtep

“Toronto is a city of neighbourhoods, Montreal(downtown) is one big neighbourhood. Personally, I find Toronto cleaner and it’s easier to get around. Montreal has better architecture but Toronto has more parks and green space.” – u/EnvironmentalMix3995

“I left Toronto to move to Montreal and I am glad I did it. A more European feel makes this more cosmo than Toronto. People are more friendly and neighbours are delightful. More higher end food spots for foodies and better stores for everything else makes Montreal is a vibrant and beautiful city. One that impresses you as you enter the down town cores of old and new Montreal. Truly a step up from Toronto. I’m glad for the move even though it will be a short stay.” – u/Able_Engineering6450

“I don’t think that Montreal looks good. But I enjoy the different vibes in every neighbourhood.” – u/clee666