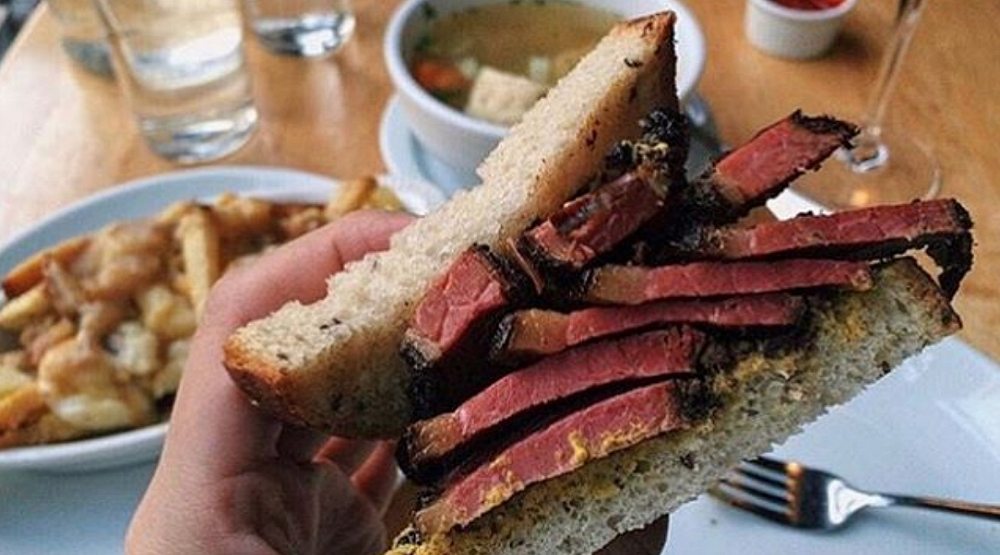 Taking a nod from their neighbours to the north, New York City (aka our city’s bagel rival), has its own Montreal-style delicatessen.

One glance at the menu and you’ll seriously think you were at any eatery in the Mile End/Plateau. The menu contains a selection of black seed bagels, sandwiches, soups, and all-day breakfasts, as well as a few dishes clearly named after famous foods, people, and spots in Montreal.

For example, the Mile End Deli’s menu includes the “mont royal” breakfast consisting of potato latkes, smoked salmon, sour cream, and tobiko caviar, the “the ruth wilensky,” a sandwich made up of fried beef salami, mustard, and a pressed onion roll, and “the beauty,” a bagel comprised of smoked salmon, cream cheese, tomatoes, onion, capers, and lemon (we can’t say for sure, but this sure sounds like a reference to Beauty Luncheonette’s famed lox bagel). They’ve also been known to serve up smoked meat poutine.

The Mile End Deli in NYC currently operates three locations, one in Brooklyn, one downtown, and one in midtown, meaning you have three chances to stop by next time you’re in the Big Apple!

Though we’re not sure anything can live up to Montreal bagels and smoked meat, it’s certainly comforting knowing we can find a little slice of home even when we’re 350 miles away from it.

Check out a few photos from the Montreal-style food served at the Mile End Deli.