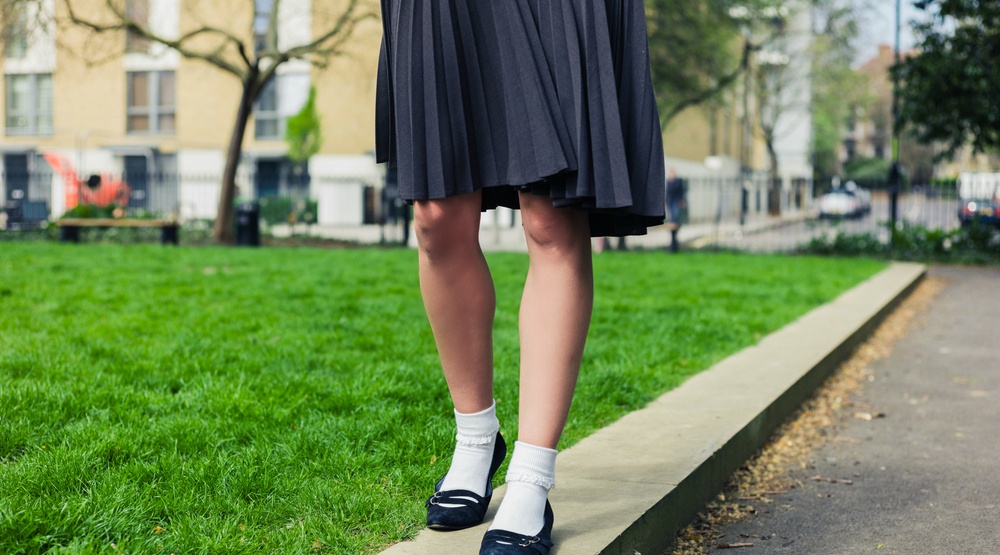 Female students at Villa Maria High School were told last week by Montreal police officers that they were basically “asking for harassment” by wearing uniform skirts that were too short.

According to a CBC report, one of the students said that a member of the police force’s campaign against sexual harassment told them that by “rolling up their skirts [they] are giving off an image of flirtation, an image of provocativeness and essentially asking for the harassment that they receive.”

Can we stop with this victim-blaming disguised as “advice” already? Villa Maria students’ outfits are as much to blame for the sexual harassment they’ve come across as the SPVM’s clown pants are.

Repeat after me: The only person responsible for sexual harassment is the person doing the harassing. Write it down and look at it from time to time if it helps.

We need to put an end – once and for all – to this notion that victims are somehow to blame for the actions of another individual who decided that what they wanted to do with their ability to make autonomous decisions was to harass a 15-year-old kid on her way to school. Put the onus on that person. Shame HIM, not HER.

If anything, this flippant “advice” immediately brought back bad memories from a few years back when four women were sexually assaulted in Montreal cabs, and our local police officers responded by recommending that ” women don’t take taxis late at night if drunk”.

I remember how angry and frustrated I was. A possible rapist was on the loose and you were placing the onus on women (who were taking a cab, which should be the safest way to get home, by the way) instead of doing your job? You were telling us to “watch out” and limit our behaviour and “behave” ourselves as if women don’t already know this is a dangerous world? As if women don’t already take precautions every bloody day when they walk out the door?

Four women were sexually assaulted while taking a cab to get home safely and instead of notifying us, the police kept it under wraps, and when they did issue a statement it wasn’t to tell us that they were doing everything possible to find the criminal, and ensuring that taxi companies reassess how they hire and keep tabs on their drivers, but to victim blame?

Once again, we were told that WE are the ones who must change the way we comport ourselves and live our lives. The onus was on US once again. We were reminded – as we so often are in this society – that it’s the victim’s fault; never the perpetrator’s.

Their statement actually eerily reminded me of the clueless statements made years ago by the Toronto Police, urging women not to dress like “sluts” so they don’t get raped. All that accomplished was city-wide outrage and the birth of Slut Walks across the country.

According to the latest statistics, women comprise 57 per cent of the STM’s ridership, and according to a Journal de Montréal investigative report, sexual harassment in the city`s metros actually increased in 2015. We are the majority of their customers, and there’s a problem primarily affecting us, but no one seems to be doing much about it.

Gender-based harassment has gotten so bad for Translink customers in Greater Vancouver, that it actually spurred a website where passengers can report their stories. Sexual harassment is not a Montreal phenomenon. It’s a worldwide problem.

Are short skirts to blame? Will dressing more conservatively keep the lowlifes away and make it safer for your daughters, your sisters, your girlfriends? Will making women take up less space, be less loud, show less skin make them disappear publicly and solve the problem of sexual harassment?

That’s a comforting thought, but it’s based on a lie.

The lie that if a woman dresses a certain way and acts a certain way she won’t be harassed, she won’t be raped, she won’t be RESPONSIBLE for the outcome. Even though countless of studies have concluded that harassment and rape have absolutely nothing to do with what a woman is wearing, what she’s drinking, where she’s going, how she carries herself, and how she lives her life, this myth that somehow we are to blame for these crimes persists.

It’s what continues to make reporting harassment and rape so difficult for women. Why would they even bother when the language used by the people supposed to serve and protect us delivers the not-so-subtle message that we are inevitably to blame for what happened to us?

Are young girls in school uniforms being fetishized in manga comics and are there creepers around the world that get their jollies from looking at them? You bet! There’s undoubtedly a direct link between the infantilizing and sexualizing of women that is worth talking about. I understand what the SPVM were trying to communicate; everyone understands it. But this is not the way to do it.

And it perpetuates the false and very unfair notion that it’s somehow someone else’s goddamn business what I should or shouldn’t wear while I’m walking to school, going to work, on my way to a party, off to the gym, or just sitting around reading a book hoping some complete stranger doesn’t walk by telling me to smile. Can we live?

If Montreal police are so motivated to tell someone what to do, how about they start with the boys at the school? How about they educate them on how to conduct themselves so they don’t grow up adding to the myriads that think they’re entitled to an unsolicited opinion on women’s bodies. It would be a nice change of pace for once.