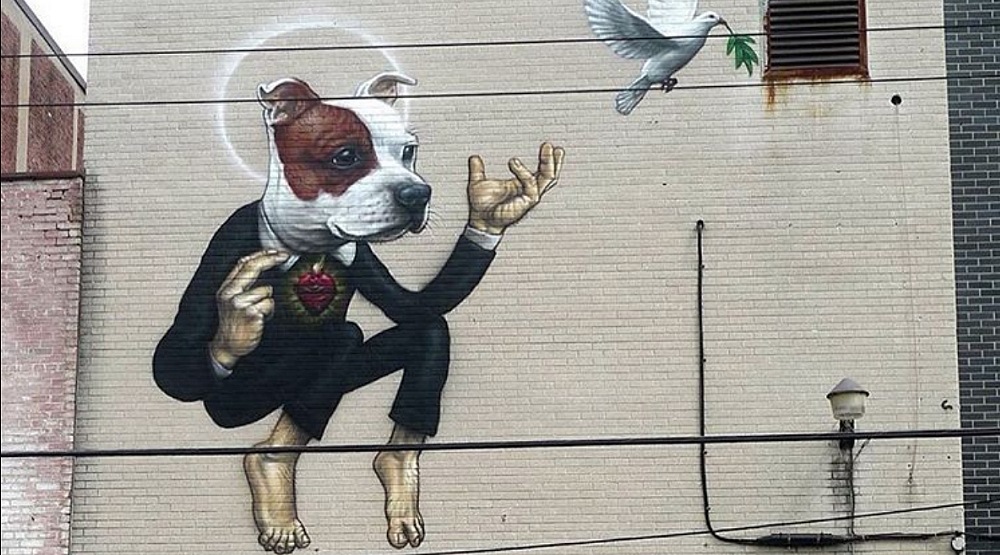 The Montreal pit bull debate is heating up.

Earlier this summer, Montreal Mayor Denis Corderre announced his decision to potentially enact a city-wide ban on pit bulls. While it came as a relief to some Montrealers, others were far from impressed with the mayor’s plan.

If the law is passed, Montreal would ban the sale or adoption of pit bulls starting on September 26th.

With the September 26th deadline looming, one Montrealer has taken to the streets to protest this potential ban.

Montreal-based artist, John Labourdette has painted a pit bull street mural in an effort to send a message to the municipal government.

The mural depicts a pit bull’s head on a human’s body releasing a dove.

Labourdette is one of many Montrealers opposed to the proposed pit bull bylaw. Of his artwork, he states, “I’m trying to send out a message to people here to wake up, and to the world: look at what’s going on here in Montreal. Rather than just the city imposing their opinion on all of us, on all the citizens, based on no scientific evidence, just on their will.”

No matter your stance, it’s fair to say this is one powerful piece of artwork.

Interested in seeing the city’s latest piece of street art in person? Then you better head over to the Beaubien metro station.