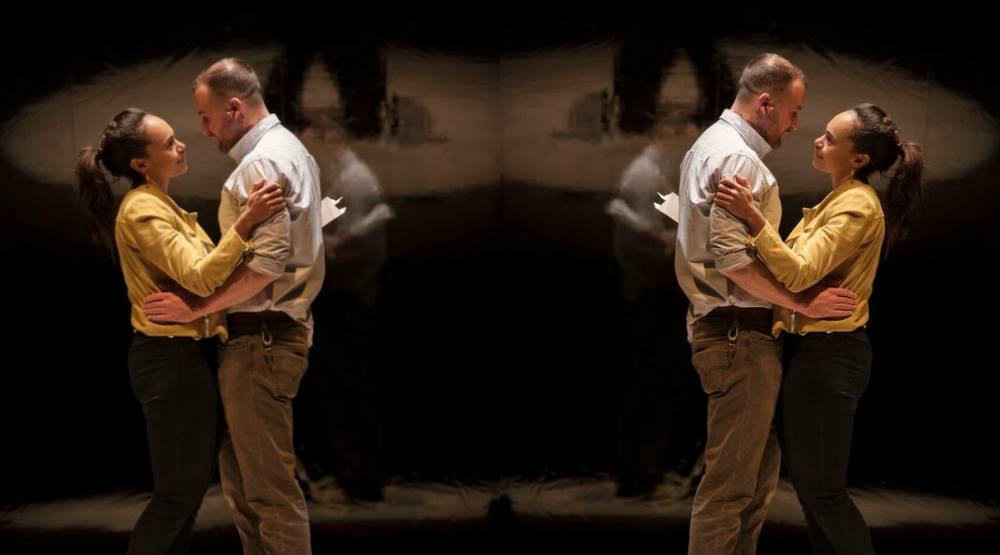 You don’t need to understand anything about quantum physics or string theory to enjoy Nick Payne’s Constellations, but it probably won’t hurt if you do.

The Centaur has decided to open its 48th season with a magical, quirky, and intellectually and emotionally compelling two-hander by British playwright Nick Payne, about the concept of a “multiverse” existing, where “several outcomes can coexist simultaneously.”

The story has a bit of a Groundhog Day vibe to it, where you get to see a number of scenarios play out back-to-back between Marianne the theoretical physicist and Roland the beekeeper. You can’t escape the feelings of déjà vu as the main leads slightly repeat themselves with what appears to be an endless series of possibilities and outcomes.

“In the quantum multiverse, every choice and every decision you’ve ever made and never made exists in an unimaginably vast ensemble of parallel universes,” she explains to Roland when they first meet at a party.

It might appear to be heavy stuff, but it’s really enjoyable and effortless following the two of them live out a variety of scenarios at the drop of a hat. The stage direction is so masterful that with every position of their bodies, every slight change in the scene, we already know that another outcome, another “universe” is taking place and we are watching how things could have unfolded instead of how they did. Which, by the way, we’re not quite sure of until the very end…

Payne wrote the play in the aftermath of his father’s death and having experienced the pain of mourning a parent I can understand the appeal of exploring multiple universes; the comforting (if not slightly discombobulating) thought that endless copies of every single one of us are living out different lives and different outcomes without ever really knowing which one is the best.

Mourning does that to you. It makes you question the reality of your pain, the accuracy of your memories, and the “what ifs” become so incapacitating they almost don’t allow you to be grateful for what was. Payne described the notion of a universe in which his father had not died as both “curiously unhelpful and quietly consoling.”

The focus here, of course, is the love story between Marianne and Roland, played by the energetic, likeable, and pitch-perfect pair of Cara Ricketts and Graham Cuthbertson. For 70 minutes all the audience sees is the two of them on stage, meeting, flirting, falling in love, moving in together, cheating on one another, separating, falling ill, and not necessarily in that order.

The dialogue is funny, it’s contemporary, it’s believable, and at times it’s heartbreaking.

When a possibly dying Marianne tries to console Roland by telling him that the laws of physics don’t have a past and a present and that time is irrelevant, that “we have all the time we’ve always had”, that “you’ll still have all our time”, that “there’s not going to be any more or less of it,” I was immensely moved by those words and the intensity of her frustration and pain.

The “what ifs”, of course, are central to the story. How many of us have contemplated the possibilities and the outcomes being different if we had done things differently or if the ones in our lives had acted differently? How many of us have pondered the unnerving likelihood that chance, not merit or calculated decision making, has altered the direction our lives took? At its core the play also reminds us of the infinite possibilities that life has to offer, that if our choices define us, than making a different choice can alter our circumstances and its trajectory, that where we are is not necessarily where we have to stay. These realizations manage to be both hopeful and fatalistic in nature.

The play also brings to the forefront the resigned sadness of knowing that time is finite for us; we’re only allowed so many “do overs”, so many mistakes, so many f*ck ups, so many choices, and at some point we need to decide what matters and what we want to focus on.

Writer and columnist Flora Whittemore said: “The doors we open and close each day decide the lives we live.” The opportunities that we take advantage of when they pass us by, the ones we choose to ignore, the relationships we pursue, the ones we destroy by being careless, our lives our defined by our choices, and that is both a glorious affirmation of free will and a terrifying reminder that what we do and who we are every single day as human beings matters.

Director Peter Hinton has done a beautiful job of ensuring that everything about the simple and Spartan set has a purpose, yet does not in any way interfere or distract from the story. The routinely spinning stage, like a third member of the play, shifts and turns as a living existing atom, bringing the leads together and pulling them apart. It’s compelling to watch.

Cellist Jane Chan adds the beautiful – and at times, haunting — soundtrack to Marianne and Roland’s moments in time.

This co-production between Toronto’s Canadian Stage Company and the Centaur Theatre is a wonderful start to the season. Nick Payne’s play on life, love, loss, and free will is something, I’m fairly certain, that all of the infinite versions of me would have enjoyed in all of my parallel universes. Or so I think…

Constellations will be running until October 30 at Centaur Theatre, 453 St-François-Xavier St. For more information and/or tickets you can 514-288-3161 or visit centaurtheatre.com.