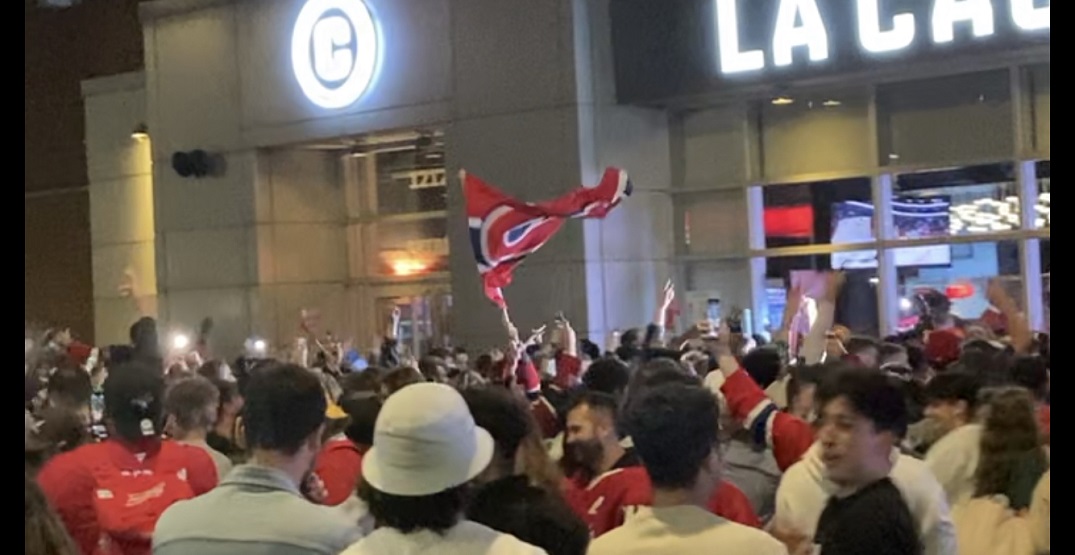 Not much can stop Montreal Canadiens fans from tuning into and cheering for the team’s surprise playoff run.

Both bars had limited capacity and safety measures were taken inside, but outside was a true free-for-all.

The same day fully-vaccinated Canadiens coach Dominque Ducharme tested positive for COVID-19, it was a strange contrast to see a tightly-packed outdoor crowd.

The screens were big enough to follow the game’s action, but they weren’t exactly optimized for the overflow audience. After all, they were located well inside of their respective establishments.

Masks were common, but not on everyone. Social distancing was few and far between throughout many parts of the crowd.

An on-and-off rainy evening dampened the outdoor fans themselves, but not their mood. Some were dressed well for the occasion in jackets. Many ended up soaked and shirtless. Many fans ended up on shoulders or chose to body surf.

We got a body surfer after Anderson tied it up! pic.twitter.com/PeyRQvzZOW

The viewing experience itself was sub-optimal.

It was a great place to attend a party, but a tough way to actually follow a hockey game.

Figuring out where the puck was on the ice through a precipitation-covered window was next to impossible. “Who scored?” was the second-most commonly asked question of the evening, with various iterations of “can you believe it?” easily securing the number one spot.

Sounds of the broadcast itself were drowned out by ‘Ole’, ‘CAR-EY’, and ‘F*** Vegas’ chants. If anyone told you they could really figure out how much time was left in the game without checking their phone, they were either pressed right up against the glass or gifted with great vision.

Some of the screens at Madisons were out of sync with one another, too.

An outdoor screen at the McDonald’s located a block away from the arena drew a few fans on and off, but most gave up after repetitive freezing of its feed, or the game cutting out completely for minutes at a time.

For most, they’d be reacting to the goals of the night nearly a full second after the puck went in, waiting for the camera angle to shift to the Montreal players celebrating with each other.

The Canadiens didn’t give their fans much to cheer for through the game’s first 58 minutes. Vegas outshot Montreal 40-21 in regulation and held a 2-1 lead late into the third.

But as one of the oldest clichés in hockey goes, it’s what happens through the full 60 minutes that counts.

Josh Anderson’s retrieval of a gaffe by Golden Knights goalie Marc-Andre Fleury to tie the game with under two minutes left in the third period sent the crowd into a frenzy.

For those who stuck it out, hardly anyone seemed to care about the challenges of the evening. The post-game celebration experience following Anderson’s second goal of the night – the overtime winner – was one of pure jubilation.

The lighting of firecrackers, as well as hugs and high-fives between strangers and friends, followed the come-from-behind win.

Canadiens fan lights off a FIRECRACKER in middle of the crowd following that OT win pic.twitter.com/ZUL3VhiOi7

A large police presence prepared for the worst. Officers with riot helmets, officers on horseback, officers on bikes, and officers in cruisers surrounded each and every street in the tightly-packed area.

Fortunately, they didn’t appear to have much action. A few fans openly carrying alcohol were forced to pour it out, but the scene was relatively tame, all things considered. Littering was likely the most serious crime of the day.

“There’s people f****** rioting over there!” one fan exclaimed on the way out.

If there was any real riot, it certainly wasn’t widespread. An investigation of the specific area this fan was pointing to seemed that his statement was mostly conjecture though, with no visible damage available to any buildings or property.

Montreal police have yet to respond to a request for comment on the evening or if any charges were laid.

Sneaking around on the job

The scenes in Montreal were one thing – it’s about what you’d expect from a hockey-crazed city that hasn’t been to the Stanley Cup Final since their last win in 1993.

But for a group of warehouse workers on Canada’s east coast, it was the risk of losing their jobs while watching the game on the clock that made it that much more interesting.

“The thrill of potentially getting caught and being fired made the game a lot more entertaining to watch,” a warehouse employee named Ben told Daily Hive.

“My friends and I who are also Habs fans were hiding all night and taking turns keeping watch for supervisors.”

A hidden cellphone was the screen of choice for Ben and his coworkers, who aren’t allowed to use one during their shifts.

Ben said he was at work for the game’s first two periods, rushing back to catch the third and overtime in a much more comfortable environment. After Montreal fell behind 1-0, Ben and his crew couldn’t help themselves when rookie Cole Caufield tied it up midway through the second period.

“Caufield’s goal made us all scream at the top of our lungs,” he said. “Luckily, no one heard us.”

Ben confirmed he’s got tomorrow night’s game off. There’s no rain in the forecast, either. Only time will tell if the Habs’ magical run is set to continue.