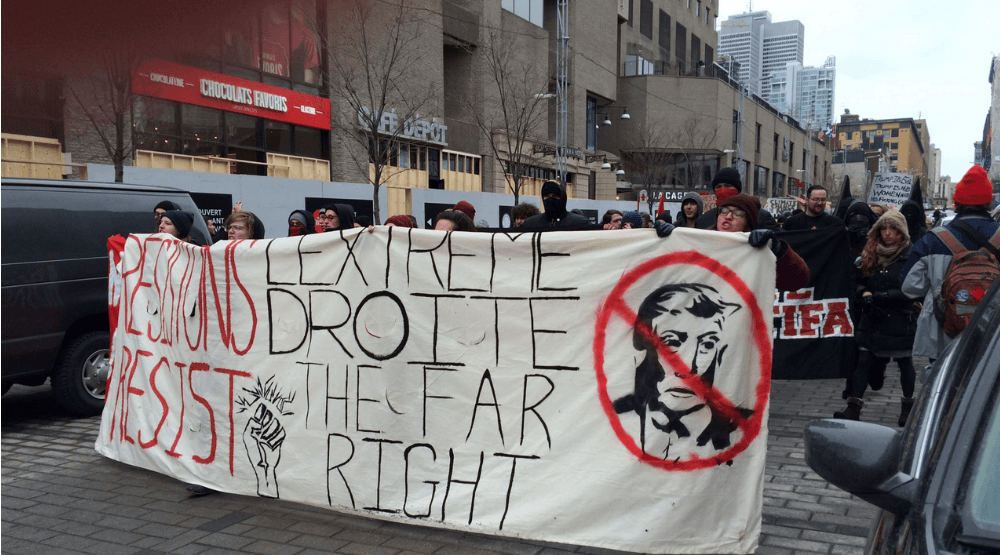 Even before Donald Trump was sworn in as the 45th President of the United States, global protests against him and his administration had already started. By the time Friday, Jan. 20 and his inauguration came along, they were in full swing, and Montreal was no exception.

Two anti-Trump protests are taking place today. One occurred earlier today and another is expected to take place around 6 p.m. tonight. The Friday afternoon protest brought together approximately 200 people, who met at Place des Arts metro station, marched inside Complexe Desjardins for a brief time, and then marched east along Ste. Catherine Street.

Chanting “No Trump! No hate! America was never great!”, they headed towards the U.S. Consulate, where it quickly turned ugly with protesters burning an American flag.

Many on social media found the gesture disrespectful; not so much towards the new president, but towards the United States as a country.

“Why would you burn an American flag, you idiots? Why not just burn a Trump effigy?” one Montrealer tweeted in visible annoyance, adding the hashtag #cons to express his disagreement with the actions taking place.

Another waxed nostalgically about 2012, a year all Montreal residents remember well.

Another anti-Trump march is expected to take place tonight at 6 p.m. at Phillips Square with approximately 150 people present.

Despite the small number of people taking part in today’s protests, the U.S. Consulate has issued an official message on its website warning U.S. citizens not to take part in any planned demonstrations in Montreal for their own safety.

“Even demonstrations intended to be peaceful can turn confrontational and escalate into violence,” says the U.S. Consulate message. “You should avoid areas of demonstrations, and exercise caution if in the vicinity of any large gatherings, protests, or demonstrations.”

For Montreal residents, veterans of the 2012 Maple Spring student protests, and long-time participants or observers of protests that are, for the most part, usually safe and pretty calm, it’s a little funny to read warnings issued about us.

Still… with protests all around the world and with Trump having upset more than a few people along the way, the U.S. Consulate isn’t taking any chances and erring on the side of caution.

One of those demonstrations they’re warning Americans to stay away from will be the Women’s March taking place tomorrow Saturday, Jan. 21 at 11 a.m. at Esplanade de la Place des Arts, in solidarity with the Women’s March simultaneously taking place in Washington. The march is inclusive to all and open to families and children.

While not necessarily an anti-Trump rally, the Women’s March is definitely in protest of much of the sexist and racist rhetoric heard during Trump’s presidential campaign, and it’s in solidarity with American women who are now worried about some of their rights and reproductive freedoms being eroded under a Trump administration.

In the meantime, however, a number of Canadians, as well as dual U.S. and Canadian citizens who have attempted to enter the U.S. to take part in protests talking place in the U.S. and the Women’s March in Washington have been turned away at the border.

A few Montreal residents headed to the United States stated that they were asked point blank by the border guards if they were “pro- or anti-Trump”, prompting concern among many Canadians as to whether people are now being screened for their political beliefs.

It’s something worth being concerned about since being able to peacefully protest is ultimately a human right.