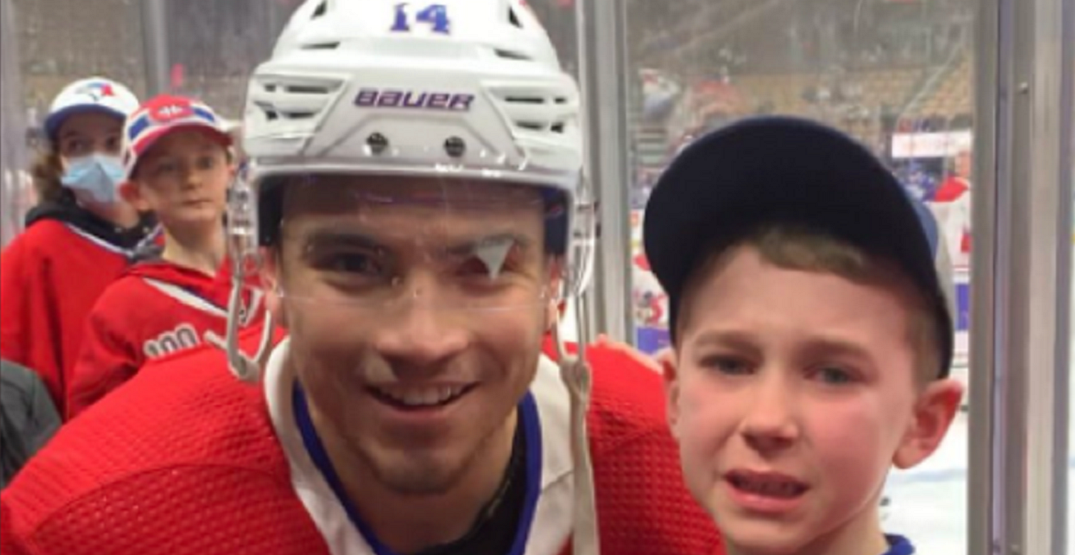 Young Montreal Canadiens fan Hunter Beauparlant and his father, Steven, made headlines over what happened at Saturday night’s Leafs-Habs game in Toronto.

One part of the story is clear: Hunter received a stick and a puck from Nick Suzuki during warmups, the latter of which hit the young kid in the face.

What happened after that isn’t quite agreed upon by the different parties.

Steven Beauparlant says that Scotiabank Arena staff asked them to leave, deeming the stick “a weapon.”

The Canadiens offered the young fan a Suzuki jersey of his own to make up for the incident.

Our friends @TricoloreSports would like to send him a Nick Suzuki jersey! Could you please open your direct messages so we can get your contact information?

But the Leafs and their ownership have refuted the claim that the young fan “had to leave the game.”

In a statement tweeted out by TSN’s John Lu, Maple Leafs Sports and Entertainment say the incident didn’t quite happen as the elder Beauparlant suggested.

A MLSE official provided TSN with this account of what happened at Scotiabank Arena on Saturday night. #Leafs #Habs https://t.co/vXGPhtmglQ pic.twitter.com/iT0nRujrDk

“MLSE and its fan services team works in every case to deliver a world-class experience for each fan, while ensuring the safety and enjoyment of their fellow attendees is protected,” MLSE wrote in the statement to TSN. “In this case, with 10 minutes remaining in the game, a fan was notified by security as he was walking in the concourse with a hockey stick, that due to fan safety protocols, MLSE’s fan services would assist them to check the stick until the end of the game as it poses a safety hazard for other fans.”

MLSE added that the Beauparlants left the game on their own accord, turning down the option to check in the stick.

“While the fan in this case did not want to check the stick, and instead made their own decision to leave the game, the protocol remains an important one for fan safety,” the statement continued.

Toronto ended up winning the game by a 3-2 score.