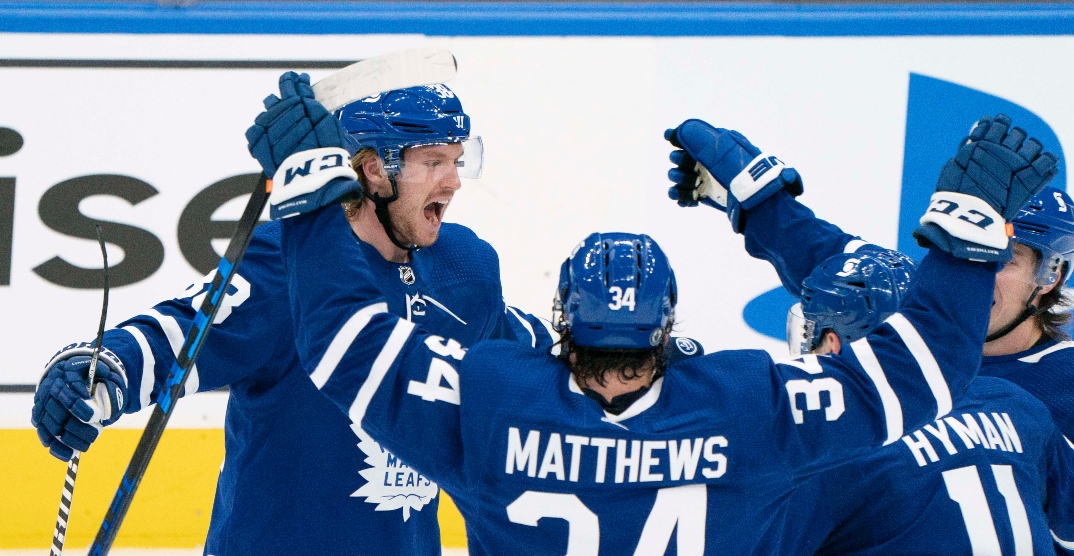 After losing not only Game 1, but also captain John Tavares to a concussion and knee injury on Thursday, the Toronto Maple Leafs bounced back with a 5-1 win in Game 2 on Saturday night to even up their first-round series against the Montreal Canadiens.

The game-winner came off the stick of Auston Matthews just over five minutes into the second period. The Rocket Richard Trophy winner put home the rebound off a Justin Holl shot for his first goal of the postseason.

The game actually started well for Montreal. A healthy scratch in Game 1 after a difficult finish to his regular season in which he had just four points — all assists — over the final 24 games, Jesperi Kotkaniemi put a loose puck by Jack Campbell just about eight minutes into the game to open the scoring.

Later in the first period, Jason Spezza tied things up for Toronto — with some help from a fortunate bounce off an official.

Spezza called dibs on that one. 🚨 #ItsOn pic.twitter.com/F7wN21VfLO

After Matthews gave the Maple Leafs the lead, the Canadiens began a parade to the penalty box, taking three penalties in a span of 5:29. The Habs were able to kill off the first two, but the Leafs’ power play was looking crisp, and it finally capitalized on a Rasmus Sandin one-timer on the third power play.

Spezza called dibs on that one. 🚨 #ItsOn pic.twitter.com/F7wN21VfLO

Montreal issued a bizarre challenge for goaltender interference. Also odd was how long the review took, given nobody seemed to be sure what the Habs thought their case was here, including Leafs GM Kyle Dubas.

The goal was confirmed and the Habs went right back to the penalty kill, though they did kill it off.

The Canadiens didn’t do much in the third period to make you think they might have a comeback in them. Instead, William Nylander added some insurance on the power play, finding the back of the net for the second straight game.

Needing three goals to tie the game, Habs coach Dominique Ducharme went for an aggressive goalie pull with more than six minutes to go. They couldn’t cut into the deficit, though, and Alex Kerfoot finally hit the empty net for Toronto with 1:23 remaining.

After the teams split the first two games in Toronto, the series will now shift to Montreal for the next two. Game 3 is set to go at 7 pm ET on Monday at Bell Centre.