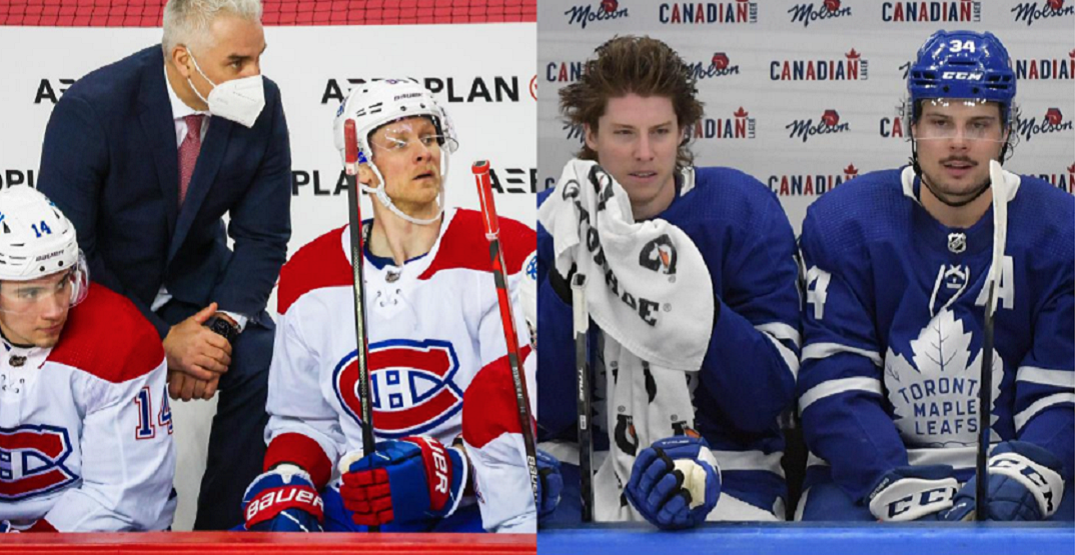 Ahead of tonight’s playoff series opener between two classic Canadian rivals, tensions are high, to say the least.

Sheldon Keefe, head coach of the heavily-favoured Toronto Maple Leafs made his message clear: he expects his high-octane offence to be, well, as explosive as always.

In particular, he shot down the idea that he might be worried about line-matching against the Montreal Canadiens’ shutdown units, in particular defensive specialist Phillip Danault, who has finished top 10 in Selke voting each of the last two seasons.

“I don’t feel the need to protect Auston from anybody,” Keefe said. “I’m not going to be hiding our best people from anyone.”

It’s hard not to read into Keefe’s comments as a bit of a jab at his predecessor, Mike Babcock. Babcock was notorious for underplaying Matthews in key situations, perhaps most famously a 2019 Game 7 against Boston where he played just 18:48 in a 5-1 loss. For comparison’s sake, Matthews played 21:33 on average this season and will be skating between Zach Hyman and Mitch Marner.

There are no major surprises with how the Leafs set up tonight.

Riley Nash makes his debut on the third line, between Ilya Mikheyev and Alex Kerfoot, while Alex Galchenyuk is the main notable scratch.

Zach Bogosian is slotting in his usual spot on the third pair after missing games since April 20 due to a shoulder injury.

Matthews has 12 career playoff goals in 25 games during his four seasons as a Leaf. A 0.48 goals per game pace is pretty impressive, but it pales in comparison to the 0.79 mark he put up this year with 41 goals in 52 games as he won his first career Rocket Richard Trophy.

While the Canadiens do not have a forward of the calibre of Matthews or Marner, Canadiens interim head coach Dominique Ducharme cannot say the same about protecting his players. Jesperi Kotkaniemi and Cole Caufield, the Habs first round draft picks in 2018 and 2019, respectively, are both healthy scratches to start the series.

Jake Evans takes the fourth line centre role where either young player would be likely to slot in.

Shea Weber is also coming back from injury and slots in on the third pair, as is first-line winger Brendan Gallagher and Carey Price, who starts in net.

Tyler Toffoli comes in as the Canadiens’ primary threat on offence, leading the team with 28 goals.

Kotkaniemi had a bit of an underwhelming year, scoring just five goals and 15 assists as he dressed in all 56 games this year. Still, it is a little curious to see him completely out of the lineup.

Caufield, meanwhile, scored four times in his 10 games with Montreal while adding a lone assist.

Canadiens forward Tomas Tatar said he’s raring for the chance to play in the playoffs after a tough end to the regular season that just about everyone felt was dragging on once the four playoff spots looked all but decided for nearly two months.

“Quite honestly, I didn’t feel the best at the end,” Tatar said. “There were a lot of games. I was really happy we finished the regular season. I think it’s going to give me a lot of confidence. The body just feels good. We had a little rest from hockey. Your mind is clear and I’m super excited to come back again and play at such a fun time of the season like this.”

Analytics website MoneyPuck.com rates the Leafs at having a 75% chance of winning the series, the most lopsided odds in the NHL.

But it doesn’t take much thinking to realize that nothing’s guaranteed with these — or any — NHL playoffs.

“They have a very good team,” Danault said. “We recognize that. But, we did our job. We’ll come out hard.  Matthews and Marner are star players. It’s only normal for them to find ways to score from time to time.  We’re all capable of playing against them… The stage is set for a big game tonight.”

Ducharme said the team has been prepping mentally and physically over the last week to put the team in a good spot.

“It’s a different situation than other seasons because we’ve already met 10 times,” he said. “They know us well and we know them well. We know what’s coming and they have a good idea too.”

It all gets underway tonight at 7:30 pm ET. The game is broadcast nationally CBC, Sportsnet, and available for free online at CBC.ca.