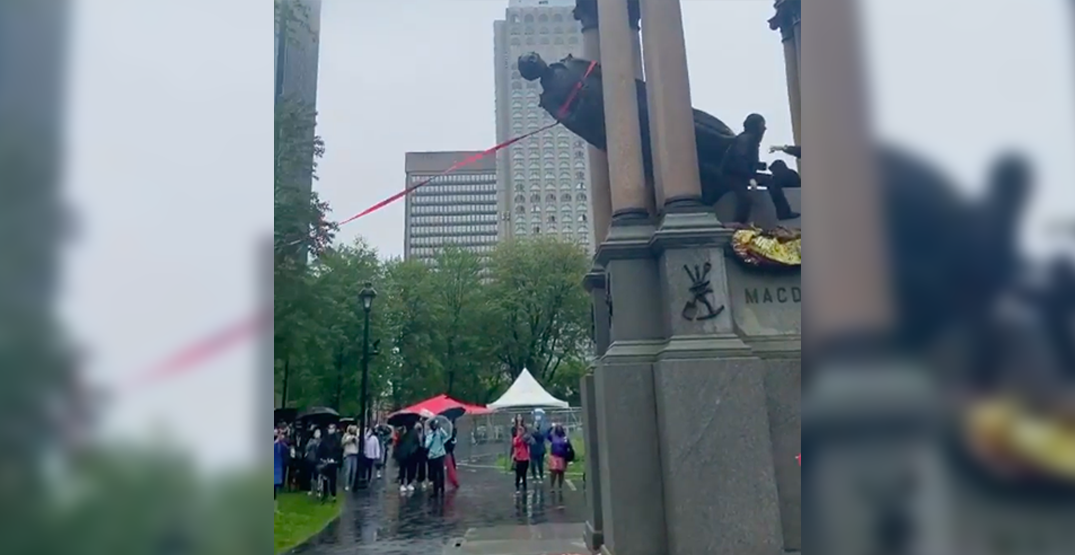 Prime Minister Justin Trudeau has denounced protesters who toppled and defaced the statue of Canada’s first prime minister, John A. Macdonald, over the weekend.

Trudeau was at the National Research Council of Canada facility in Montreal on Monday, making an announcement about COVID-19 research and told reporters he understands Canadians who want to see more action on discrimination and systemic racism but said vandalism is “not an acceptable” way to express such views.

Trudeau said he agrees with Montreal Mayor Valérie Plante that “acts like this” have no place in society.

In French, the prime minister said there are different ways to get points across and that “vandalism is not advancing the path towards greater justice and equality in the country.”

The Macdonald statue at Dorchester Square was unbolted, graffitied, and toppled on Saturday, after a protest demanding  the City of Montreal cut the police’s budget.

The statue was targeted, as it’s been in the past, by activists because of Macdonald’s association with the Indian residential school system which forcibly removed Indigenous children from their homes in place of education in church-run communities.

“Macdonald was out first prime minister and I think it’s still important to recognize the role he played in the creation of this country compared to the world we now live in,” said Trudeau in French. “We must acknowledge that there were certain actions that were unacceptable that is part of recognizing our history as a country.”