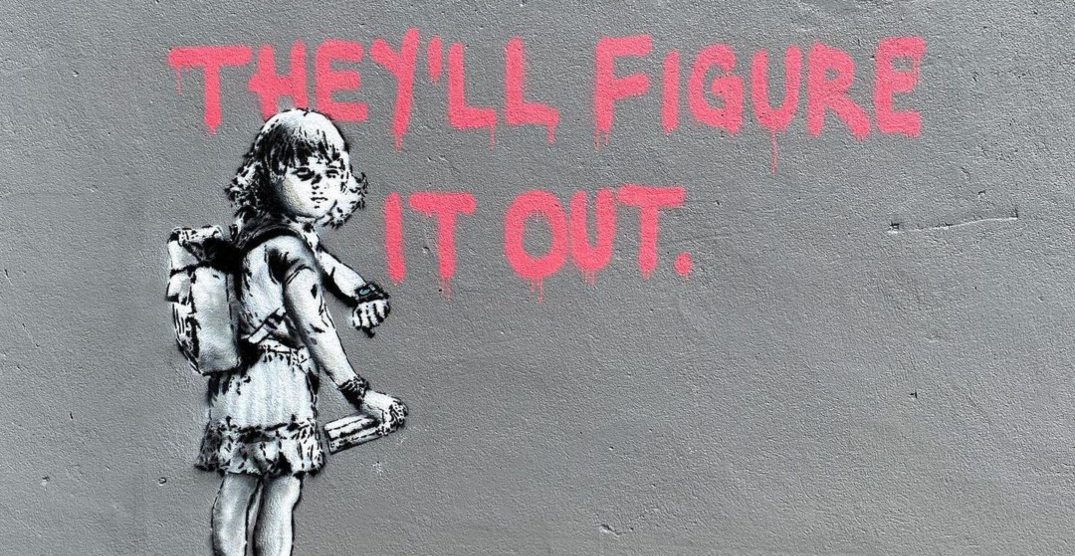 A new Banksy-style mural stencil has popped up on the streets of Montreal.

iHeart, the anonymous Vancouver street artist known for murals evocative of Banksy’s style, has created a new mural in Saint-Henri.

In a post shared on the artist’s Instagram, iHeart captioned, “How do you figure?” accompanied by a clock emoji.

The artist tells Daily Hive the piece is about the “generational passing of the buck.” In the mural, a little girl is looking at her watch in front bright pink letters that read, “They’ll figure it out.”

iHeart continued to tell Daily Hive that other generations pass climate change problems off onto the next, instead of figuring out solutions themselves. “We’ve hit a threshold where that’s not really possible and we’re on the clock,” continued iHeart. “Collectively we can soften the blow of the climate crisis even if the targets are completely out of reach.”

Keeping a bit secrecy, the artist says the art piece can be found on the back wall of the Dollarama in Saint-Henri.

Another thought-provoking stencil from the secretive artist also popped in Montreal, featuring an alien delivering Amazon packages while fanning its maskless face.

Keep your head up for iHeart’s stencil murals across town.