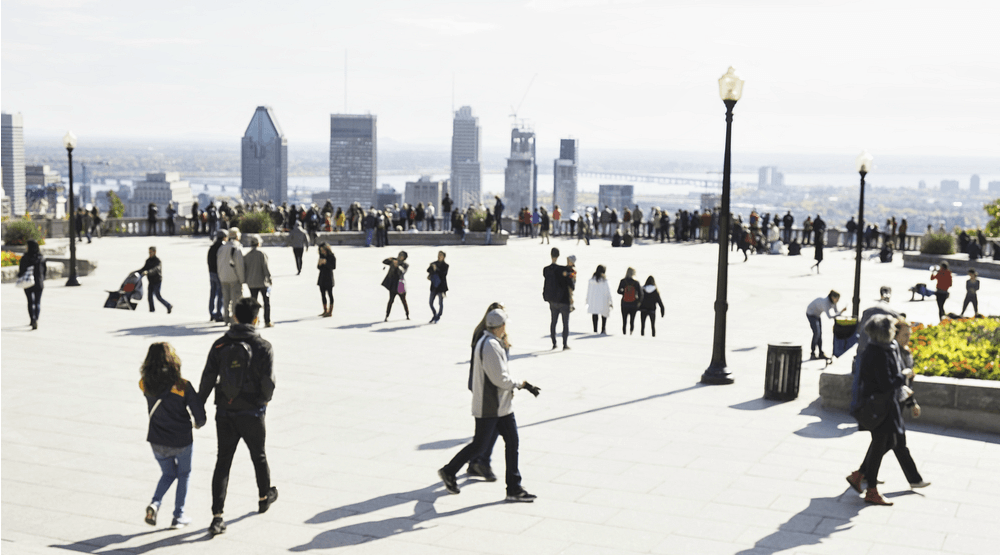 Check out 18 free things to do in Montreal this April.

We all scream for ice cream! Ben & Jerry’s annual Free Cone Day is back for yet another year. Happening on April 4, 2017, get ready to head to your nearest Ben and Jerry’s location for a free scoop of their delicious ice cream. This is the company’s way of showing you just how much they care. Taking place all across Canada, be sure to visit your local Ben & Jerry’s between 12pm and 8pm on April 4th. Whether you have a soft spot for chocolate fudge brownie, cinnamon buns, chocolate chip cookie dough, chunky monkey, or another one of their delectable flavours, make sure to grab your well-deserved cone of ice cream free of charge next month. To find a location near you, click here.
When: April 4, 2017, 12-8pm
Where: Various locations

Shock and Stupor: The reactions of the American public after the first 100 days

UQAM has announced they will be hosting a talk analyzing U.S. President Donald Trump’s first 100 days in the office. Titled, “Shock and Stupor: The reactions of the American public after the first 100 days,” the event will dissect the policies and decisions made by the Trump administration during its first 100 days in office. It is said that a president has the most power during this time, and as we’ve seen so far, Trump has not been shying away from his power, already having implemented a variety of controversial measures. Thus, the participants in this political science debate at UQAM will attempt to answer and grapple with such questions as: “What is the status of US domestic policy 100 days after the change of custody in Washington? How does the United States behave on the international stage? Are Americans satisfied with their president? What should be monitored for Donald Trump’s remaining term?”
When: April 27, 6:30-8:30 pm
Where: Room A-2860, Pavilion Hubert-Aquin (A), 400 Sainte-Catherine Street East

Montreal’s beloved 21 Swings (or 21 Balancoires) is returning to Promenade des Artistes this spring! Officially scheduled to open April 10th, is there any better sign that spring has arrived? The interactive, music art installation will have us all feeling like children again as we swing back and forth while a beautiful melody plays. Created by Daily tous les jours, in collaboration with animal behaviourist Luc-Alain Giraldeau and composer Radwan Ghazi Moumneh, this fun and colourful urban playground will be over 24 hours a day between April 10th and May 28th.
When: April 10-May 28
Where: Promenade des Artistes

One of the city’s best literary festival returns for yet another year this April. This year’s festival features all sorts of events, ranging from workshops to readings. In addition, a multitude of literature will be represented including graphic novels, poetry, and both fiction and nonfiction. Read more about the 2017 programming here.
When: April 24-30
Where: Various locations

Time to dust off your old record player because Montreal will soon be hosting a massive record sale. Officially called the Montreal Record Convention, this annual event sees hundreds of Montrealers flocking to Mile End church, Église St-Enfant Jésus. Hosted by Aux 33 Tours and Discs Beatnick, the Montreal Record Convention has nearly 50 vendors selling all sorts of records. The vendors will be made up of independent merchants selling records from their personal collections. Thus, you can expect many rare vinyls. In addition to the vendors, the event will also feature live DJs who will be playing music all day long.
When: April 29, 8 am-4 pm
Where: 5035 Rue St-Dominique

Celebrate Earth Day with the Redpath Museum. Titled “Toby and the Toads: You’re Never too Young for Natural History,” the event is free to attend and is perfect for both children and adults. This special event will teach guests all about the behaviour of a tropical toad. There will even be an outdoor nature walk where people can learn about Canadian Wildlife Federation’s Wild Family Nature Clubs.
When: April 23, 2:30-4:30 pm
Where: Redpath Museum, 859 Sherbrooke St W

Free to attend, this national career event will feature major companies in all sectors, ranging from IT and engineering to banking and finance. Meet potential employers and attend workshops about all aspects of the job hunt including CV-building tips and interview preparation.
When: April 5-6
Where: Palais des Congres

As of April 15th, Bixi Bikes are back on the roads which means it’s time to start exploring our city’s beautiful bike paths. With bike paths all around the city, cycling in Montreal has never been easier. And if you know where to go, you’ll find that Montreal boasts some pretty magical bike paths – so magical in fact, they may give you a whole new perspective on your favourite city. So hop on your bike, borrow one from a friend, or take advantage of the city’s Bixi bikes and get pedalling! For a little inspiration, check out the most beautiful bike paths in Montreal.
When: Anytime
Where: Various locations

Papier 11 is a paper art fair that takes place annually in Montreal. Attracting thousands of people from all over the city, this event specializes in contemporary art creations made out of paper (drawings, engravings, photographs, collages, etc). Many local galleries and artists are represented including Studio 21 Fine Art, Pangea Project, Gallery Nicolas Robert, and many more. As this is the festival’s 10th anniversary, it will feature nearly 300 artists from 39 galleries.
When: April 21-23
Where: TBA

Montreal is hosting yet another exciting art festival this film, the International Festival of Films on Art. The 2017 theme of the festival is Play & Distraction, and will explore the connection between fun and human nature. A unique festival that recognizes the films created on art and media arts, the International Festival of Films on Art (or FIFA) seeks to promote the work of artists, increase knowledge of this art among the public, and encourage the film community to produce more films based on art. 2017 marks the 35th year of the event and in the past, over 200 films have been shown from over 25 countries around the world. The festival has even toured other cities, including New York, London, Brussels, Boston, Helsinki, and Paris.
When: March 23-April 2, 2017
Where: Various locations

The Montreal Jewish Museum is hosting a special event in honour of Refugee Rights Day. The Museum invites all Montrealers to learn about the experience of refugees who have fled their homes. Three women, Rivka Augenfeld, an advocate for refugee rights, Rena Schondorf, a Holocaust survivor, and a third who recently arrived in Canada, will all be speaking about their personal experiences. The event is free to attend and begins at 7pm.
When: April 4
Where: Montreal Jewish Museum, 4040, boul. St. Laurent

Free on the last Sunday of each month, don’t miss the opportunity to explore the city’s top museum completely free of charge. With everything from graphic and contemporary art to Latin American and First Nations art, there is plenty to see at this gorgeous museum.
When: April 30
Where: Montreal Museum of Fine Arts

Never Without Our Children Screening

The Montreal Holocaust Museum is screening the documentary Never Without Our Children, which tells the story of two Quebec sisters who saved over 50 children from the Cambodian genocide. The film’s director,Yves Bernard, along with one of the children saved by the sisters will be present to answer questions about the documentary. The screening will be in French only.
When: April 19, 7-9:3pm
Where: 5170 ch. Of the Côte-Sainte-Catherine