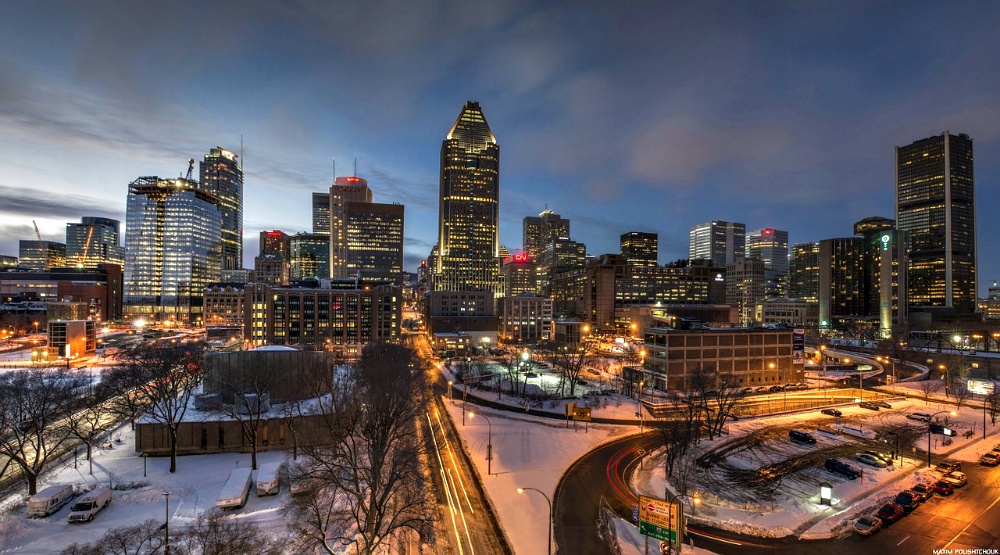 Sadly, you’ll have no time to enter hibernation mode this month.

With a ton of events happening right here in Montreal, from the city’s premiere winter festival, Fete des Neiges to ice pirate ships and free workout classes, we better not catching you hiding out indoors all month long.

As a little incentive, check out 21 free things to do in Montreal this January.

Happy New Year from STM! As a special New Year’s gift to us from the STM, the Montreal metro will be open all night on December 31st. Just to be clear, we’re talking all four metro lines. What does that mean? No more worrying about how to get home and no more crazy surge Uber prices. Instead, you can relax knowing the trusty metro will remain open to get you home all night long.
When: December 31-January 1, 2017
Where: Montreal Metro

Enjoy free admission to the Montreal Museum of Fine Arts

Visit our city’s best museum, the Montreal Museum of Fine Arts, for free this holiday season! Thanks to our friends at the MMFA, Montrealers can stroll amongst the museum’s impressive collections free of charge between December 26, 2016 and January 2, 2017. That’s one full week of free entry! Take advantage while you can.
When: December 26-January 2
Where: Montreal Museum of Fine Arts

Head to Studio Bizz Mont-Royal for the fitness class of a lifetime. Titled Swedish Fit, this unique class offers a full-body workout, starting with warm-ups, moving into cardio and muscle strengthening, and ending with stretching. Set to the tone of some pump-up music, you’ll love getting fit in the new year with this free one-hour workout.
When: January 7, 10 am
Where: Studio Bizz Mont-Royal, 551 Avenue du Mont-Royal Est

Slide down the snow atop Mount Royal on the designated snow tubing trails near Beaver Lake. Rent an inflatable inner tube or bring your own, and enjoy an afternoon of gliding down the mountain at high speeds. Rentals are $9 for adults and $5 for kids, however snow tubing is free for those who bring their own gear.
When: December 17-March 6, 2017
Where: Beaver Lake, Mount Royal

Our favourite winter event has returned. Happening on January 8, 2017, the international No Pants Subway Ride will be taking over the Montreal metro all afternoon long. Participants are invited to meet at Station Mont-Royal at 2:30pm. From there, hundreds of pants-less riders will make their way through the city’s metro system. The event is scheduled to last for 3 hours until 5:30pm. The International No Pants Subway Ride started in New York in 2002 and has since become a global event with celebrations taking place all over the world. As per usual, the event is a “celebration of silliness and nothing more. It is absurdity for absurdity’s sake.”
When: January 8, 2017 2:30-5:30 pm
Where: Station Mont-Royal

Boasting perhaps the most picturesque rink in all of Montreal, the Bonsecours Basin outdoor skating rink will be up and running this December. Bring your own skates (and a hot date) and enjoy a magical night of skating under the stars to holiday tunes.
When: Early December 2016-March 12, 2017
Where: Old Port

This year, in honour of Montreal’s 375th anniversary, Fete des Neiges is going to be bigger than ever. Their 2017 programme, though not yet fully released, includes a range of brand new events and activities including snow archery, the Pat’Patrouille Academy for kids, Le Simulateur Genial at the Biosphere, and none other than an ice boat. What exactly is an ice boat, you may ask? Ice Boat is an interactive pirate ship made out of ice. From the pictures, the ship looks absolutely massive and will be open for kids and adults to not only marvel at but to walk on top of. The description reads, “Come and meet Captain Criniere and the crew of this huge pirate ship! Young and old, get on board and slip into this majestic setting.”
When: January 14-February 5, 2017
Where: Parc Jean Drapeau

Think of Luminotherapie as the 21 Balancoires of the winter months. Set up in Place des Festivals every year, Luminotherapie is an interactive art installation with featuring bright and twinkly holiday lights. Comprised of mesmerizing loops that light up and play music, the event invites Montrealers to take part in their very own winter playground.
When: December 8, 2016 – January 29, 2017
Where: Place des Festivals

Get active with your date and take them to Montreal’s biggest winter festival, Fete des Neiges. Taking place between January 14th and February 5th, Parc Jean Drapeau will host a myriad of snow-themed events and activities. On this year’s schedule? Everything from evening dance parties to dog sledding. Outdoor activities include snow tubing, cross country skiing, dog sledding, snow archery, an icy pirate ship, a special simulator at the Biosphere, ice skating, ice sculptures, ziplining, a ferris wheel, a Village of Penguins, a Polar Circus, snow scooters, an inflatable bouncy castle, and a mini igloo play area. Though some activities will cost you, many are free. Plus, walking around the grounds on its own is enough of a fun time.
When: January 14-February 5, 2017
Where: Parc Jean Drapeau

Ever wanted to participate in a massive game of pond hockey? Well now you can. Thanks to the Classique Montrealaise, Montrealers are invited to attend a huge outdoor hockey tournament in honour of the city’s 375th anniversary. 2017 marks the very first year of this unique event. Taking place at Parc Jean Drapeau on January 28th and 29th, hundreds of hockey lovers will head to Olympic Basin for the hockey tournament of the season. Whether you’re a seasoned hockey veteran or a newbie, there will be a level for everyone! Divided into four categories: die-hard, recreational, ladies, and 50 and over, Montrealers far and wide are invited to participate in this two-day hockey extravaganza.
When: January 28-29, 2017
Where: Parc Jean Drapeau, Olympic Basin

Who says food truck meet-ups are just for summer? Reviving the beloved Food Truck Friday experience is SnowFood Saturdays. Presented as part of Village Mammouth, each saturday between January 28th and March 4th, Montreal food trucks will congregate at Olympic Stadium between 3pm and 10 pm. Top top off the delicious street food, there will be live music and international DJs playing tunes every Saturday night.
When: Saturdays between January 28-March 4, 2017, 3-10 pm
Where: Olympic Village

We’ve already reported on the lighting up of Place Jacques Cartier and the pedestrian-friendly changes coming to Sainte Catherine Street, however, now MTL 375 has released the official schedule of events starting in December 2016 and going until December 2017. After looking at the lineup, we can tell you that the winter months have an incredible program in store for Montrealers. From a giant game of pond hockey courtesy of Classique Montrealaise and an urban winter obstacle course in Barbegazi to magical winter moonlit bike ride and curling like you’ve never seen it before, MTL 375 is guaranteed to keep you active from January until March.

When: January-March 2017
Where: Various locations

Explore a national park in Quebec

With all the hype surrounding the free entry, most of the focus has been on some of the most popular (and breathtaking) parks in the country, parks like Banff, Gros Morne, and Kootenay. While these parks are certainly stunning, we urge Montrealers not to overlook the beauty of the province of Quebec. Within the province of Quebec lay three national parks: Forillon National Park, La Mauricie National Park, and Mingan Archipelago National Park, each one more magnificent than the last. Explore them for free during 2017 thanks to Parks Canada granting free entry into all Canadian national parks in 2017.
When: 2017
Where: Various locations

McGill’s own Redpath Museum hosts free scientific talks, called “Cutting Edge Lectures,” for the public every month. Though you might worry the science is over your head, it’s presented in such a way that even someone with no scientific background will understand. Afterwards, you can even take a walk around the dimly lit museum and explore everything from dinosaurs to mummies. This month’s talk is on January 12th.
When: January 12
Where: Redpath Museum, 859 Rue Sherbrooke O

Olympic Stadium’s Village Mammouth is the place to be this winter. The festivals boasts an ice skating rink, snow tubing slides, a winter fair, food trucks, live music, and more. Village Mammouth is open all winter long, until March 12, 2017. Admission is completely free, though ice skating or tubing will cost you.
When: December 9-March 12, 2017
Where: Olympic Village

Take your date on a classic winter adventure: tobogganing down one of the city’s many hills. Whether you’re more of a plastic disk, magic carpet, or wooden sled kind of person, there are plenty of places to enjoy an afternoon whizzing down Montreal’s natural slopes. Mount Royal, Parc Lafontaine, and Westmount are great places to go tobogganing this winter. Note: if you have your own sled, this activity is free, and if not Dollarama typically sells magic carpets for as little as $2.
When: Anytime
Where: Various locations

Go on a snowshoeing adventure in the heart of the city on Mount Royal. Where winter fun prevails, Mount Royal is home to ice skating, cross country skiing, sledding, snow tubing, and snowshoeing in the wintertime. There are over 3km of trails and snowshoes can be rented from the Beaver Lake Pavilion. The cost of rentals is $9 for 1 hour or $15 for 3 hours, however if you have your own, this activity is completely free.
When: December 3-March 12, 2017
Where: Beaver Lake, Mount Royal