Researchers say a fireball that was seen above Quebec and Southern Ontario early Wednesday may have dropped meteorites.

According to Western University, the bright fireball was observed at 2:44 am ET on July 24 on their All-Sky Camera Network, which constantly monitors the sky for meteors.

NASA also reports that many observers in the states and provinces surrounding Lake Ontario reported seeing a bright fireball, including in the Toronto area. 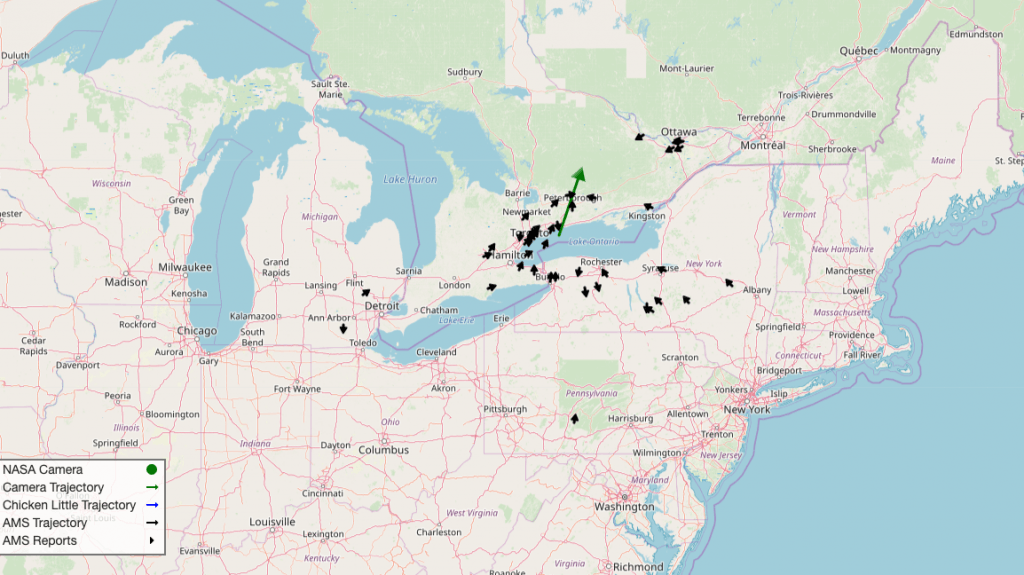 “This fireball likely dropped a small number of meteorites in the Bancroft area, specifically near the small town of Cardiff. We suspect meteorites made it to the ground because the fireball ended very low in the atmosphere just to the west of Bancroft and slowed down significantly. This is a good indicator that material survived,” said Brown.

Western says that preliminary results indicate that the fireball first became visible just south of Oshawa over Lake Ontario at an altitude of 93 km. “It travelled over Clarington and passed just west of Peterborough before extinguishing just west of Bancroft,” stated a release.

The university also confirms the meteoroid was roughly the size of a small beachball (approx. 30cm in diameter) and “likely dropped a small number of meteorite fragments in the tens to hundreds of grams size-range on the ground.”

Brown, along with the University and the Royal Ontario Museum (ROM), are interested in anyone from the area surrounding the fall who may have heard anything unusual or may have found possible meteorites.

“Meteorites are of great interest to researchers as studying them helps us to understand the formation and evolution of the solar system,” said Brown.

The researchers say meteorites can be recognized by their dark, often scalloped exterior.

They are generally denser than a ‘normal’ rock and will often be attracted to a magnet due to their metal content.

Meteorites are not dangerous, according to the university, but if recovered, it is best to place them in a clean plastic bag or wrap them in aluminum foil.

In Canada, meteorites belong to the owner of the land upon which they are found, said the school.

If you may have found a rock that may be from this fireball, you can contact Kim Tait of the Royal Ontario Museum at [email protected]