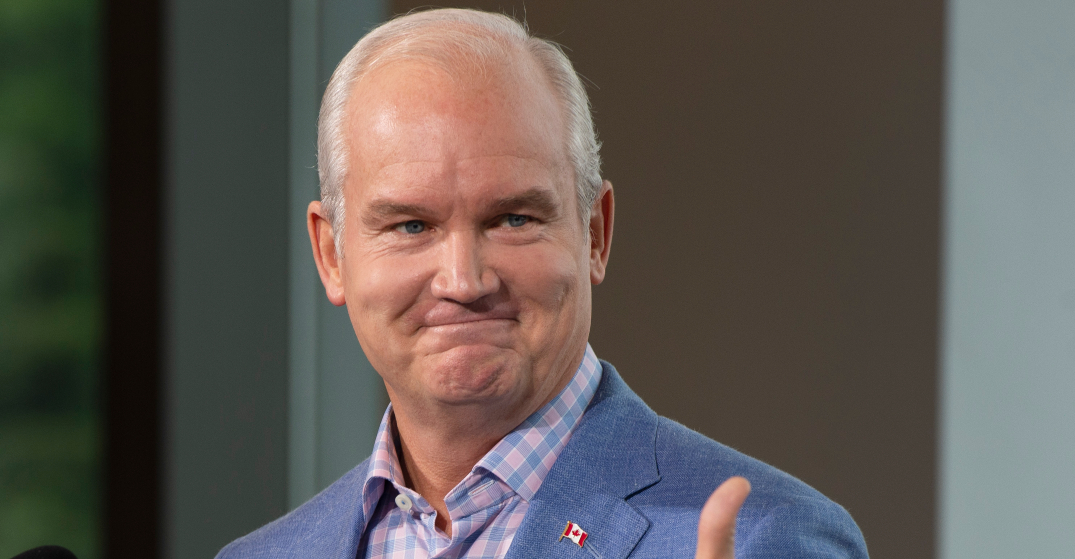 Conservative Leader Erin O’Toole called on Quebecers to give him and his party a chance conceding that in the past it hasn’t been clear enough on where it stands on abortion.

O’Toole delivered his speech in French while campaigning in Quebec City Wednesday, an area where it hopes to increase its seat count on the September 20 election.

The Conservative leader appealed to voters by saying he knows some in the province have been reluctant to support the party in past elections because it hasn’t always been clear about its position on certain social issues.

He reinforced he believes in climate change and has a plan to address it, something party critics said was lacking in the 2019 federal campaign and also singled out abortion.

“I am pro-choice,” he said in French. “And I have always been pro-choice.”

O’Toole said a Conservative government would respect a woman’s right to choose, which the outdoor crowd of candidates and supporters cheered.

The issue of abortion dogged former Conservative leader Andrew Scheer during the 2019 campaign as he was pushed to clarify his views about the procedure during the French-language debate.

Scheer was a social conservative who eventually said while he’s personally opposed to abortion he wouldn’t reopen the debate and reject any attempts to do so in Parliament.

Even before the last election started, Scheer found himself having to explain his stance after his Quebec lieutenant, Alain Rayes, told local candidates that backbench MPs would not be allowed to bring forward any bills or motions on the issue, which created confusion because it broke with party policy.

Abortion remains a challenging issue O’Toole has to deal with, given the number of social conservatives within the party base.

The most recent example came in June when a majority of the Conservative caucus backed a private member’s bill that came from Saskatchewan Conservative candidate Cathay Wagantall, which tried to ban doctors from performing an abortion based on the sex of a fetus.

O’Toole voted against the bill, which was defeated 248-82.

With all but one vote cast in its favour coming from the Conservative benches, Liberals attacked him for allowing one of his members to bring forward an attempt that would restrict a woman’s reproductive rights.

O’Toole spent Wednesday making a play for Quebec, pledging a new
“contract” with the province and rolling out a set of promises he would fulfil in his first 100 days in office, if elected.

Those included working with the province to apply a local French-language bill to federally regulated businesses, giving it more power over immigration and “respecting the right of Quebec to pass its own laws to protect its language and culture.”

O’Toole is hoping to add to that by also promising funding for an tunnel under the St. Lawrence River that would connect Quebec City and Levis,  and benefit commuters.

It’s expected that some 50,000 cars would use the link daily.

To court Quebec voters away from federal parties, namely the Bloc Quebecois that surged in the 2019 vote, he’s also vowed to boost health transfer money “without conditions” and protect the French language while giving more power over its culture and immigration.

“It was us talking about the decline of French in Montreal, it wasn’t the Bloc Quebecois,” O’Toole said during an earlier campaign stop Wednesday.