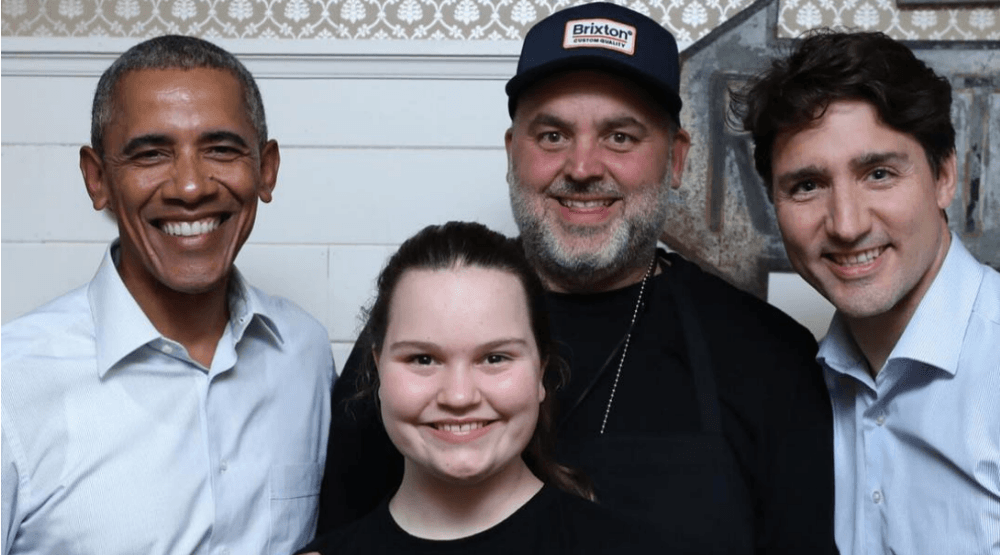 Former US president Barack Obama was in Montreal yesterday speaking out against climate change and nationalism in a  keynote speech delivered to the Montreal Board of Trade.

But the real buzz happened after, when Obama was spotted at Little Burgundy’s famed Liverpool House restaurant.

When speaking with David McMillan, co-founder of the famed Joe Beef and Liverpool House, he shared:

“The Prime Minister’s office contacted me to make a reservation on Monday and as always, we staffed accordingly. Mr. Trudeau is a regular and always reserves the same table. It’s his table and he likes it there. For us, everybody is important, and we work all day to make every customer happy. At the end of the day, people come here to drink, eat well and have fun. So for us, regarding yesterday… that’s simply what we do everyday.”

So what did Obama and Trudeau have from the menu?

“These guys can eat! They had oysters, smoked trout, halibut, Québec prime ribe, morels, asparagus, lobster spaghetti…. and they ate everything.”

We are not surprised!

While it was literally a frenzy outside the restaurant, inside everyone was calm and it was “business as usual.”

“The other clients in the restaurant were instructed not to take photos, and they couldn’t go to that table nor bother them. We made sure they were in peace and having a good time. Here in Montreal, people have a lot of respect. It went very well.”

So was Obama their most famous client yet?

“I’m extremely lucky. I’ve had an amazing career, I’ve cooked for lots of people. We had Mick Jagger once and Paul Newman, but yes… cooking for Barack Obama is huge. Definitely our most important client so far.”

The chef/restaurateur can’t deny the fact that his phone has been buzzing since yesterday, but as he says “we’re always busy. We can’t be busier than being full.”