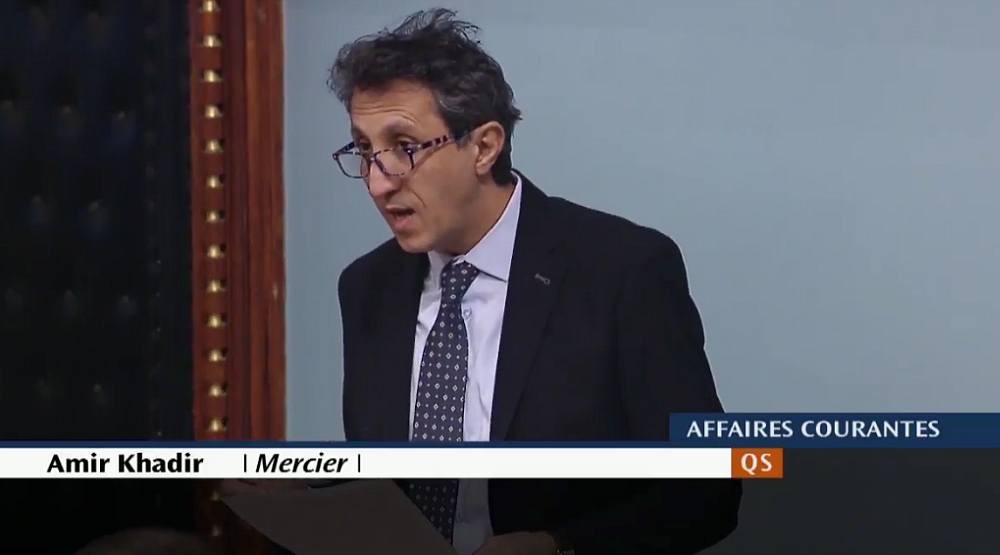 In an unprecedented (to my knowledge) move the MNA for Québec Solidaire in the Mercier riding, Amir Khadir, decided to speak in English during the National Assembly’s Question Period and address Quebec Anglophones, who he feels should be better informed of the Liberal Party’s corruption.

“Corruption in Quebec is not only ‘en français’,” the MNA stated, explaining, during a speech that quickly made the rounds on social media, that he believes Anglophones are unaware of significant problems in electoral financing and scandals affecting the Quebec Liberal Party.

To be fair, many similar problems have plagued the PQ and the CAQ, with all three parties recently forced to forfeit illegal contributions they had received to the chief electoral officer. But since the Liberals are the party in power and since a number of scandals which were revealed took place under Jean Charest’s watch, it’s normal that Khadir would single them out.

Today I decided to ask the government my first ever question in English about the enormous sums embezzled by Liberal bagmen. #polqc #assnat pic.twitter.com/wqIpIJqmRw

“Today I decided to ask the government my first ever question in English about the enormous sums embezzled by Liberal bagmen. Anglos have to know the Liberals campaigned with illegal contributions,” he wrote on his Facebook page.

“A recent poll shows that many of Anglo-Quebecers still believe the Liberal Party is not a corrupt party. The Liberals have been taking Anglo support for granted, but it’s a one-way street. It’s time to tell the truth: this government does not deserve your vote.”

During the short speech, which was met with what appeared to me looking at the video footage, confusion and/or bemusement by many in the National Assembly, Khadir stated that he believed Anglophones deserve to hear about the corruption concerns.

“The Anglo community has to know how corrupted the Liberal Party is,” he tweeted. “They vote for a party that has made campaign with illegal funding. All of us – including Anglos – have to know that many Liberal bagmen fraudulently raised money in return of favors.”

Khadir’s attempt to reach Quebec Anglophones is commendable. However, I have to disagree with his statements that Quebec’s English media does not cover Liberal corruption as well as French media. It simply isn’t true.

Don Macpherson, Quebec Affairs columnist for the Montreal Gazette, who has written an impressive number of columns about Liberal corruption over the course of his career (seriously… just Google his name and “Liberal corruption” and be treated to a fine smorgasbord) rightfully reacted on Twitter after Khadir’s declaration with this tweet.

The same can be said of the CBC, Global News, CTV, and all other mainstream English news outlets. As an avid consumer of both French and English media, I have never noticed any glaring discrepancies in the way Anglophones have been informed of Liberal scandals, construction corruption, and everything in between. I don’t believe Anglophone media is cautious in reporting about Liberal scandals out of any misguided sense of loyalty to a federalist party (that is the implication, right?) or out of any sympathy for them.

I do, however, agree with Khadir that there is potentially a difference in the way some Quebec Anglophones (and probably, Allophones) choose to focus on it when it comes time to vote.

During a Twitter exchange I had with him, the Quebec Solidaire MNA explained to me the reason he decided to address English Quebecers were the results of a Leger poll, published in L’actualité and which revealed important discrepancies between Francophones and Anglophones with regards to the perception of the Liberal Party.

According to the poll, a vast majority of Francophones (79 percent) perceive that under Philippe Couillard’s Liberal Party corruption problems are just as important or even more important as in previous governments. That number drops to 67 percent for non-Francophones. Two Francophone Quebecers out of three (66 percent) believes that the Liberal Party has received most illegal contributions, while only 22 percent of non-Francophones are of the same opinion.

The discrepancy is there, and it’s very real. But I also don’t believe it has anything to do with English media’s failure to accurately report on Liberal corruption.

Instead, I suspect it has more to do with many Anglophones’ and Allophones’ cognitive dissonance when it comes to voting for the Liberals, which are – for many I know – the only viable option for them as a non-separatist party that doesn’t seem intent on winning votes on the backs of immigrants and minorities.

Things are shifting in Quebec. The tired old notion that Anglophones and Allophones immediately vote for the Liberals is as outdated a concept as Eaton’s English-speaking saleslady. It’s just not the case anymore. Younger Quebecers are much more open-minded, bilingual, and global in their thinking and issues like the environment, the economy, clean energy, gender equality, and good-quality social services and education matter more to them than identity politics and the boring Quebec-versus-ROC debates. I know many Francophones intent on remaining in Canada, and many Anglophones and Allophones who don’t fear Quebec separation the way their parents did and willingly vote for separatist parties. QS and the PQ (see Jean-Francois Lisée’s English Facebook page) seem to want to tentatively reach out to them lately.

Too many, however, do fear Quebec separation. And many are definitely still stuck in the “either/or” conundrum that feeds the Liberals and allows them to take Quebec’s Anglophones and Allophones for granted. Truth be told, as long as federalism remains a top priority for certain Anglophones and Allophones in this province, they will probably continue to vote Liberal and continue to be taken for granted. The same way, perhaps, that there’s a good chunk of hard-core separatists who would vote PQ no matter what.

If people read about corruption, know about corruption, and still go ahead and vote for the Liberals because they feel there are no other viable options left for them, what does that say about all the other parties? How is it that a good chunk of Quebecers feel that no other political party speaks to them, forcing them to “hold their nose and vote” Liberal?

Khadir isn’t fair in assessing that English media isn’t doing its job of informing Quebecers of any Liberal corruption, but he’s right that too many Anglophones and Allophones may play down allegations of corruption in a sort of self-serving survival mechanism that allows them to simply continue voting for a federalist party.

Being a one-issue voter makes you vulnerable to manipulation – and one consistently sees that manipulation play out on either side of the federalism/sovereignty debate in Quebec.

It would behoove us all to remember what the top (common to all) priorities really are and demand that our politicians pay attention to them too.