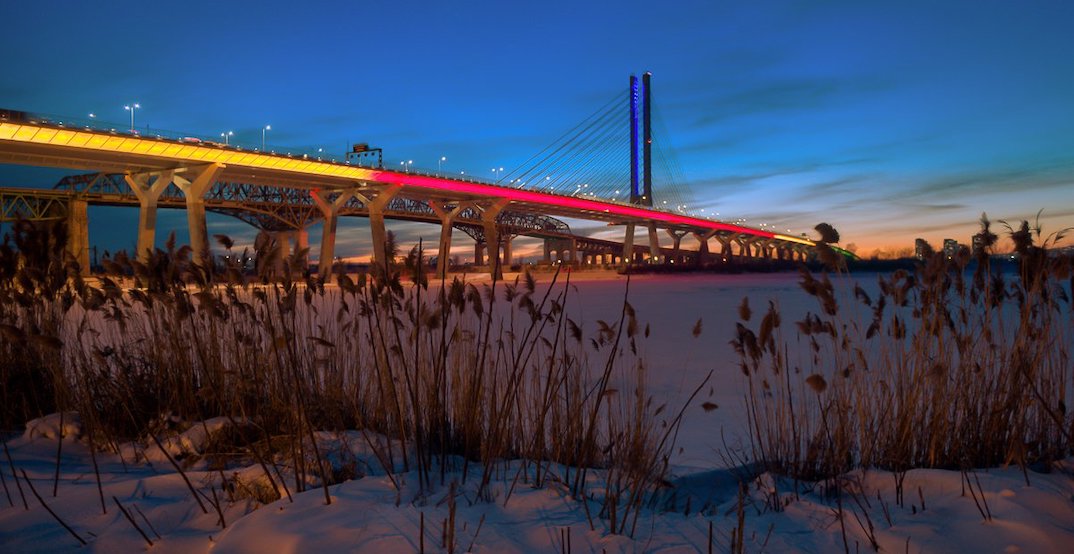 The Samuel De Champlain Bridge will take on a new array of colours to honour Black History Month.

From now until February 7, the bridge that connects Montreal to the South Shore will shine exclusively in red, green, and yellow from sunset until 1 am to commemorate BHM.

“The Samuel De Champlain Bridge will shine in the night to celebrate the legacy of Black Canadians, past and present, on the occasion of Black History Month,” says Catherine McKenna, the Minister of Infrastructure and Communities. “Throughout the history of our country, Black Canadians have done so much to make Canada the culturally diverse, compassionate and prosperous nation it is today.”

The rainbow illumination on the Samuel De Champlain Bridge will continue its nightly display on Sunday, February 7, from 7 to 8 pm.

Since March, the bridge has been displaying rainbow colours nightly as signs of support for the ongoing COVID-19 pandemic as part of the ça va bien aller campaign.

Rainbows became a symbol of hope and solidarity throughout Quebec during the first wave of the pandemic, and the Champlain Bridge has lit up in rainbow colours on a nightly basis to relay some added positivity to the city.