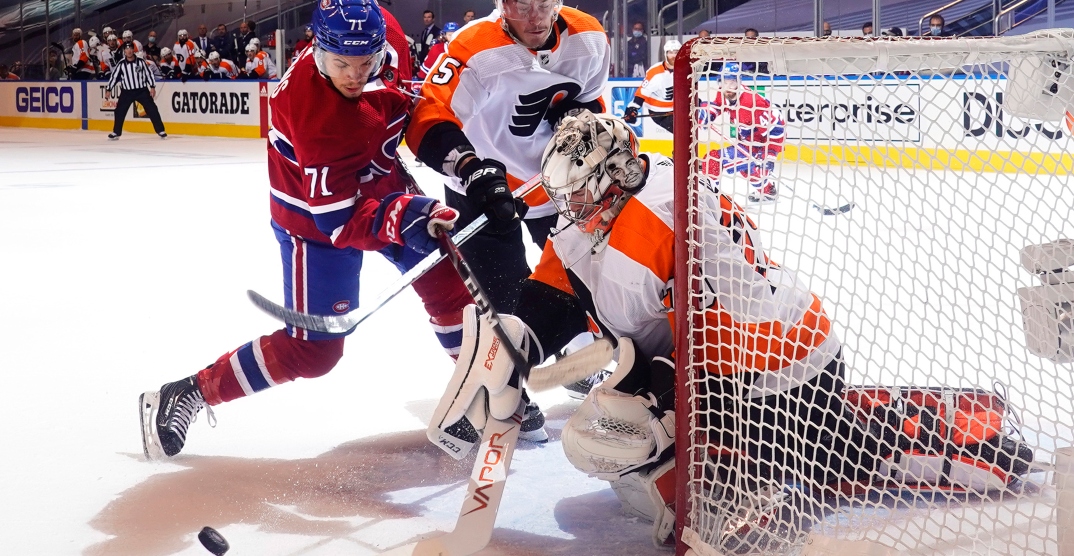 The Montreal Canadiens’ time in the bubble has come to an end.

The Canadiens were eliminated from the playoffs with a 3-2 loss to the Philadelphia Flyers in Game 6 on Friday night.

The Flyers will face the New York Islanders in the Eastern Conference semi-finals.

Just 28 seconds into the game, the Habs got a tough break as Ivan Provorov’s point shot deflected off Shea Weber’s stick and beat Carey Price to give the Flyers a 1-0 lead.

All 10 of the Canadiens’ postseason games ended up being won by the team that scored first.

About five minutes later, shortly after a Philadelphia power play ended, the Flyers got another goal on a deflection off a Hab, as Artturi Lehkonen’s stick deflected a Kevin Hayes pass between Price’s legs and into the net.

On a power play of their own a little over halfway through the opening frame, Nick Suzuki got Montreal a desperately-needed goal.

Despite being shorthanded for six minutes in the first period, the Canadiens outshot the Flyers 10-6, but trailed 2-1.

At the 4:26 mark of the second period, Philadelphia restored its two-goal lead on another lucky goal. Travis Sanheim’s shot pinballed off Michael Raffl, then Price, then into the net.

.@NHLFlyers have got some puck luck on their side tonight. 🚨#NHLonSN pic.twitter.com/Yge9c8CUB6

It sure was feeling like the Hockey Gods wanted Montreal’s season to end on Friday.

Just 1:39 later, though, the Jonathan Drouin-Nick Suzuki connection struck again to get the Canadiens back within one.

The Habs outshot the Flyers 20-12 through two periods, but in order to keep their season going were going to have to find a way to stage a third period comeback without Brendan Gallagher, who’d left the bubble to have surgery on his broken jaw.

The Canadiens spent the third period of Game 6 the way they spent much of this series. That is, trying and failing to make up a one-goal deficit. The Flyers held on for the series-clinching 3-2 victory despite the Habs outshooting them 33-17 on the night.

The Habs have a lot to be proud of for what they did in the playoffs. Most people said they didn’t belong in the expanded format and gave them no chance of getting by the Pittsburgh Penguins in the qualifying round.

Not only did they beat the Penguins, but they gave the Flyers a run as well. Montreal actually outscored Philadelphia 13-10 in the series and outshot them in each of the final five games. The Canadiens lost three games by one goal and the other by two.

The season looked to be winding down to a disappointing and uninspiring conclusion back in March. The Habs still have a ways to go to become a true contender, but fans can feel a bit better about this team than they did five months ago, and the experience that the young players gained should be valuable moving forward.