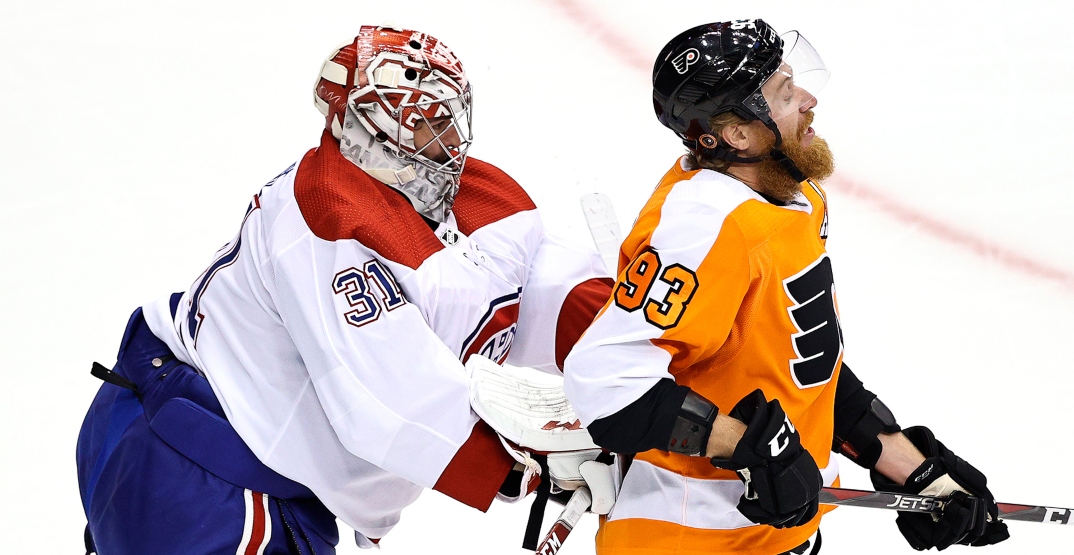 Coming off a stunning upset of the Pittsburgh Penguins in the qualifying round, the Montreal Canadiens couldn’t carry the momentum over into Game 1 of their Eastern Conference Quarter-Final matchup against the Philadelphia Flyers as they dropped the opener to Philadelphia by a score of 2-1.

At the 14:54 mark of the second period, Joel Farabee put home a rebound — and ultimately the game-winning goal.

Just 16 seconds earlier, with Montreal on a power play, Shea Weber crashed the net after his own one-timer and ended up putting home a loose puck for his third goal of the playoffs.

The goal snapped an 0-for-30 drought on the power play for the Habs dating back to the regular season.

Just 8:54 into the the game, with Jonathan Drouin in the penalty box for slashing, Ivan Provorov’s one-timer from the point deflected off Paul Byron’s stick and beat Carey Price to give the Flyers the first goal of the series.

There was then a scary moment for Habs fans late in the first period when Derek Grant gave them some flashbacks to Chris Kreider in 2014 — and then Price decided to give Grant a scare.

Carey was about to unload a Falcon Punch pic.twitter.com/7CRORUiwyD

Fortunately Price was alright, but the Canadiens were outshot 11-5 in the opening frame of the series and headed back to the dressing room trailing 1-0.

Later in the period, Price made one of the most incredible saves you’ll ever see on Scott Laughton.

Montreal played a much better period, outshooting Philadelphia 17-7, but again headed back to the dressing room down a goal.

The third period was a disappointing one for Montreal. Despite being the team down a goal, the Canadiens were outshot 13-5 and never really threatened to tie the game — aside from this opportunity from Nick Suzuki, who played a fantastic game.

SUZUKI SO CLOSE TO TYING IT! #GoHabsGo pic.twitter.com/BqeV5mXPZ8

Despite the loss and the disappointing third period, there were still a lot of things about Montreal’s game tonight that were encouraging. The Habs are heavy underdogs, but looked like they belonged on the ice against the Flyers and easily could have had a few more goals. They look like they’re capable of at least making this a competitive series.

Postseason losses are always tough to swallow, but the Canadiens earned the right to play a best-of-seven series and there’s still a long way to go in it. Game 2 will go Friday at 3 pm ET.