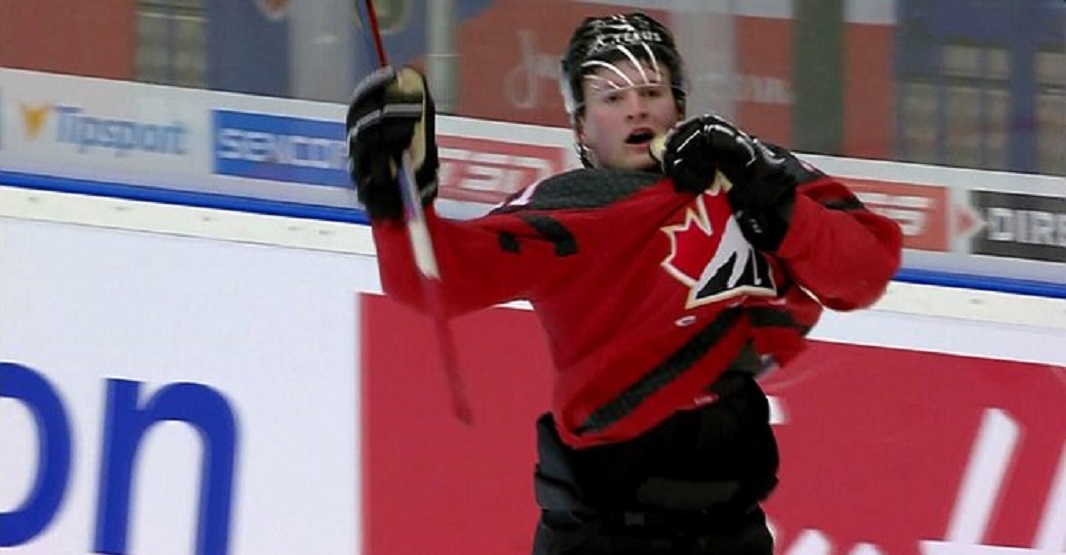 Another year, another wild Canada-USA game at the World Junior Championship.

These teams never fail to entertain and this game was especially electric, ending in a 6-4 win for Canada, who beat the USA at this tournament for the first time since New Year’s Eve in 2015.

After USA scored to tie the game with 3:18 left in the third period, it took just seven seconds for Alexis Lafreniere to snatch back the lead for Canada. The highly-skilled Canadian forward intercepted a pass by batting the puck out of the air before deking USA goaltender Spencer Knight for the game-winning goal.

ALEXIS. LAFRENIERE. What else is there to say?! pic.twitter.com/tVyObK4fZw

Adding to the excitement of Team Canada this year is the opportunity to see the consensus top two prospects for the 2020 NHL Draft — Quinton Byfield and Lafreniere — play at the same time.

It’s only been one game, but Lafreniere shone brighter than Byfield in this one, registering a goal and three assists as the driving force behind Canada’s win.

Lafreniere was especially dominant in the third period. Before scoring the winner, he danced through multiple American defenders and dished a beautiful pass to Barrett Hayton to give Canada a 4-2 lead.

THERE HE IS 👀 Alexis Lafrenière dangles through four guys then dishes to Barrett Hayton! pic.twitter.com/umrfBEvpy6

Lafreniere also assisted on Ty Dellandrea’s empty netter to put the game out of reach.

“He’s got great skill and his work ethic is outstanding,” Canada coach Dale Hunter said of Lafreniere in an interview with TSN after the game.

“He’s a little red-faced after that game because he played a bit much, but when you have your best players out at the end of a game like that, good things happen.”

It was a shaky start for Canada, who found themselves trailing 2-0 after allowing a pair of power play goals in the first period.

Trevor Zegras with the gorgeous feed to Arthur Kaliyev, and the USA take a 2-0 lead. pic.twitter.com/UGgXi6Znsk

But Canada woke up in the second. After Connor McMichael got Canada on the board with their first goal of the tournament, Hayton scored his first of two power play goals to tie the game.

Lafrenière to Hayton! The captain ties it for Canada 👀 #WorldJuniors pic.twitter.com/yrQK5COyeu

Canada then took a 3-2 lead on another man-advantage goal, this time a perfect shot by Nolan Foote that rose over the glove of Spencer Knight.

Make that three goals in the period for Canada! Nolan Foote with the snipe 🔥 pic.twitter.com/518bKBm2kS

Nico Daws got the start in goal for Canada and made 28 saves for the win in his first-ever international game. His best stop came at a key moment in the third period, stretching the left pad to rob Oliver Wahlstrom of the game’s tying goal.

Massive save for Nico Daws (@Storm_City) of the Canadian team!

Turned away Pinto's point shot and the Wahlstrom on the rebound. Daws has been really good after letting in a couple early! #WJC2020 #WorldJuniors2020 pic.twitter.com/eeqQmQk4hm

Canada will face another tough opponent in their second game of the tournament on Saturday when they face Russia. Puck drops at 10 am PT / 1 pm ET on TSN.