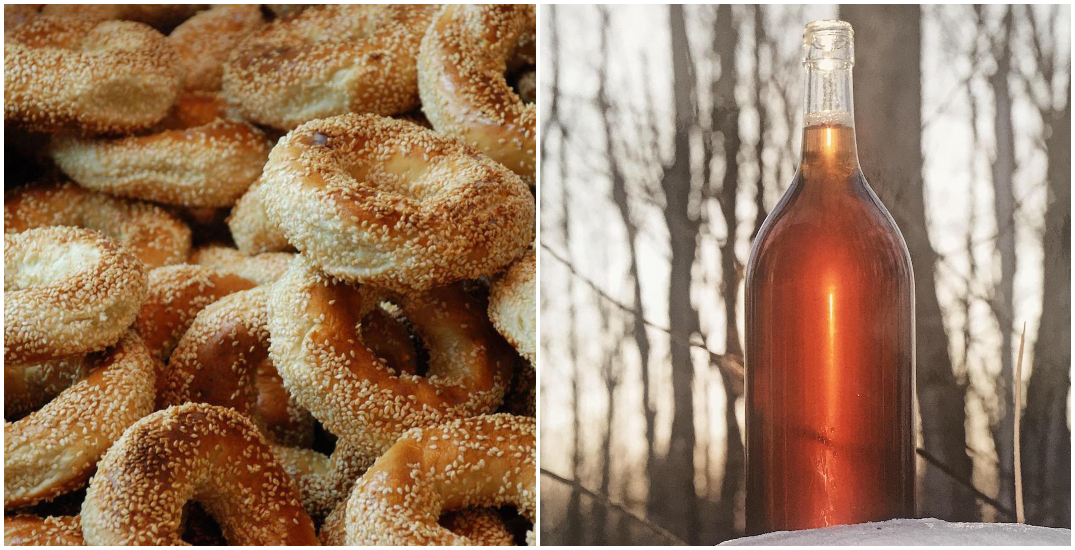 Quebec has a very tasty collection of traditional food and experiences that you have to try.

If you’re in the province, it’s not recommended to leave without trying at least some poutine, maple syrup, sugar pie, bagels, and more.

And to be honest, you wouldn’t be wrong to eat all of these exclusively.

Here are a handful of Quebec food experiences that you have to try if you’re in la belle province.

Since 1978, Sucrerie de la Montagne has become a sugar shack staple in Quebec. They differ by being open year-round meaning you can chug gallons of maple syrup until your heart is content.

Located in the midst of a 120-acre forest of century-old maples atop Mont Rigaud (70 km outside of Montreal), this is a Quebec experience you should not miss.

Tourtière is a traditional meat pie, usually filled with seasoned and minced beef (or pork). The recipes vary but it’s always a warm, comfort food, that has a crunchy crust.

Tourtière is a big brunch and breakfast item in Quebec but is also a fan favourite during the holidays.

If you’re looking for great tourtière, the J.A. Moisan in Quebec City is a good place to start. Established in 1871, it is now the oldest grocery store in all of North America.

Fairmount Bagel is the king of Montreal’s bagel game which puts it right up there at the best in Quebec.

It’s still dishing out tasty bagels in its original location from 1949. It’s open 24 hours a day because Montrealers need a bagel fix at any time of the day.

Grab a dozen sesame seed bagels, some cream cheese, and you might just end up eating all twelve.

And you know what? It’s completely normal.

From one institution to another, Schwartz’s is an absolute must-try if you’re in Quebec. Up north? Make the trip. Way over east? Do the drive.

It’s arguably the most synonymous restaurant in Montreal’s food scene, and one bite into the smoked meat sandwich will prove why.

Sugar pie (tarte au sucre in French), besides being something nice to call a loved one, is essentially maple syrup in pie form. Some spots top with ice cream as an added bonus.

If you’re on the hunt for a traditional sugar pie, the Cochon Dingue (Crazy Pig) in Quebec City is tough to top.

Ah, le steamé hot dog. Hot dogs are basic meals, but nobody does the steamé like Quebec. If you’re in la belle province, tackle any of the city’s Belle Pros, and you’ll find tasty simplicity at its best.

(And where the name comes from.)

The Orange Julep obviously stands out, you know, because it’s a giant sphere off the highway, but the Julep’s signature drink is part orange juice and part milkshake.

Again, it’s not a meal, but it’s an absolute must-try. Toss in a hot dog or two while you’re there.