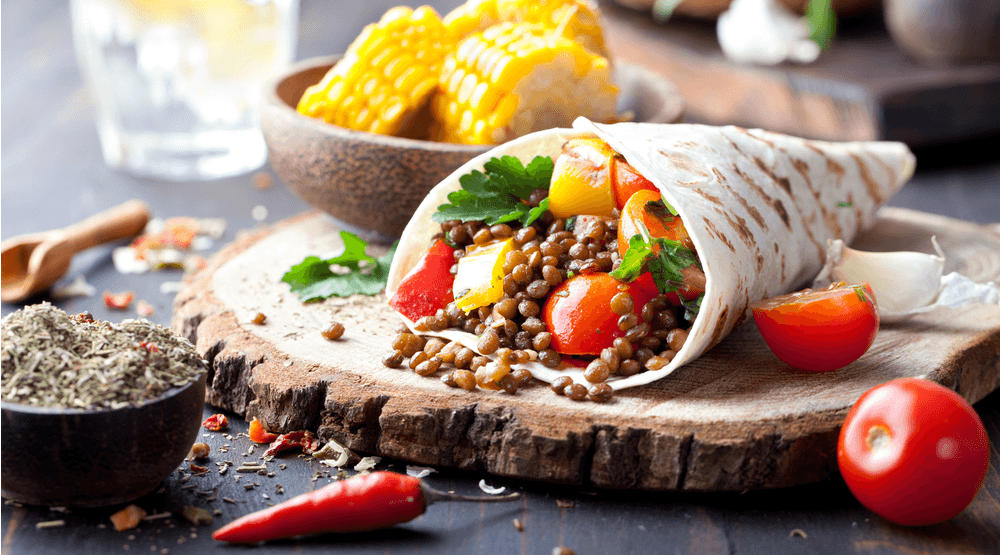 Vegan food is Montreal’s jam. With an abundance of vegan restaurants across the city, there’s no shortage of inventive and delicious plant-based food in Montreal.

For a little inspiration, we’ve put together a list of 11 must-try vegan dishes in Montreal even your non-vegan friends will like them – we promise.

A photo posted by STEPHANIA SARIDAKIS (@stephaniasaridakis) on Oct 8, 2015 at 1:22pm PDT

Serving up sandwiches, brunch, and creative cocktails every day of the week, this vegan eatery is tucked away in Hochelaga. Whatever you do, be sure to try the nut cream cheese bagel. It’s a yummy option for breakfast or lunch.
Where: 3459 Rue Ontario E

Everything at Aux Vivres is organic, local, and 100% vegan, in addition to being downright drool-worthy. From a selection of fresh pressed juices and smoothies, decadent desserts (including a chipotle brownie), and hearty rice bowls, Aux Vivres is a vegan paradise. For something extra special, you have to check out their specialty brunch option, the Huevos Rancheros. Made with corn tortillas, refried black beans, tofu scramble, salsa, guacamole, and sweet potatoes – this breakfast option is to die for.
Where: 4631 Boulevard Saint Laurent

This trendy coffee shop serves up espressos and vegan bites until 12am every day. Offering all day breakfast, soups, sandwiches, and bowls, there are a wide range of options to choose from. Whatever you do, don’t miss out on the Avocado Roll Bowl containing guacamole, cucumber, carrot, pickled ginger, seaweed, gluten-free tamari, sesame seesd, and wasabi. As an added bonus, Cafe Resonance transforms into a live music space at night.
Where: 5175A Avenue du Parc

Vegan Rapide specializes in fast food that is 100% vegan. They have an extensive menu that includes pizza, burgers, sandwiches, and drinks. Be sure to try the Pizza Traditionelle, it’s a classic.
Where: 6206 Rue Sherbrooke O

With a lovely terrace and an inspired cocktail menu, ChuChai is heaven for vegans. This Thai restaurant is known for its slew of vegan options. If you’re in the mood for a sweet mango salad, a light spring roll, or some crispy mushrooms, ChuChai is for you. However, it’s also one restaurant where you don’t want to skip dessert. Their vegan cheesecake is out of this world.
Where: 4088 Rue Saint Denis

Notoriously popular with McGill students due to their convenient location on Rue Milton, Lola Rosa serves up vegetarian and vegan food every day of the week. Their restaurants are as cozy as can be and they offer a range of scrumptious options from quesadillas to curry. Next time you’re there, be sure to try Lola’s Nachos. They’re positively monstrous and crazy delicious, smothered in corn, black beans, green peppers, green onions, and guacamole.
Where: Various locations

Falafel Balls at The Green Panther

Falafel, cookies, and energy balls are the epitome of The Green Panther. All items on the menu are vegan and organic and they deliver! If you like falafel, The Green Panther is the place for you. They’re falafel balls are to die for. They can be found in their signature Traditional Falafel Sandwich, their FalaFusion sandwich, or on their own as a yummy side.
Where: Various Locations

This upscale vegan bistro is a fantastic option if you’re looking for a fancy night out in Montreal. To start, you must try the shiitake balls covered in faux cheddar cheese. The curry stew and tofu bourguignon are crowd pleasers, and if you’re still hungry after dinner, you must try a slice of Invitation V’s almond tart.
Where: 254 Bernard Street W

Specializing in vegan baked goods, Sophie Sucree is one of Montreal’s best bakeries. Whether you’re vegan or not, you’re going to love their scrumptious cinnamon buns, brownies, cakes, and pastries. And of course, we can’t forget about the cupcakes. Enter Sophie Sucree and you’ll be greeted by an inviting display of every cupcake flavour you can imagine. In the mood for some chocolate? There’s nothing better than their vegan salted caramel brownie.
Where: 167 Ave des Pins E

Organic, vegan, gluten-free, and most importantly raw – eating at Crudessence is an experience like no other. The pesto lasagna made with zucchini is especially delicious, while the om burger made with a sundried tomato and mixed vegetable patty is a fan favourite. In other news, Crudessence recently introduced brunch so if you’re looking for a vegan alternative to Faberge, be sure to stop by one of Crudessence’s two locations. The Crepe Florentine is simply spectacular. Made with a flax and chia seed crepe, spinach, fresh tomatoes, herbed cashew nut cheese, and sauteed mushrooms.
Where: 2157 Rue Mackay and 105 Rue Rachel O

Boasting the “most ultimately nutritious plant-based powerfoods” in Montreal, Copper Branch is an all-vegan restaurant founded in 2014. Copper Branch’s extensive menu has got everything from sandwiches and burgers to their specialty “power bowls.” For your daily boost of energy, be sure to grab the Asian Fusion power bowl. Jam packed with sprouted mung beans, chickpeas, broccoli, beets, carrots, lettuce, goji berries, kimchi, and sesame seeds – there’s nothing like it. They are also open for breakfast and their matcha lime smoothie bowl is as Instagram-worthy as it gets.
Where: 1245 Rue Bishop

Sushi Momo’s unique and eclectic range of sushi options is a paradise for all the vegan sushi-lovers out there. With inventive ingredients like soybean and rice leaves, you’re going to love this funky vegan take on Montreal’s favourite Japanese cuisine. The Geisha Sweet Potato is especially good made with rice leaves, cucumber, avocado, sweet potato, organic seeds, and printemp sauce.
Where: 4669 Rue Saint-Denis