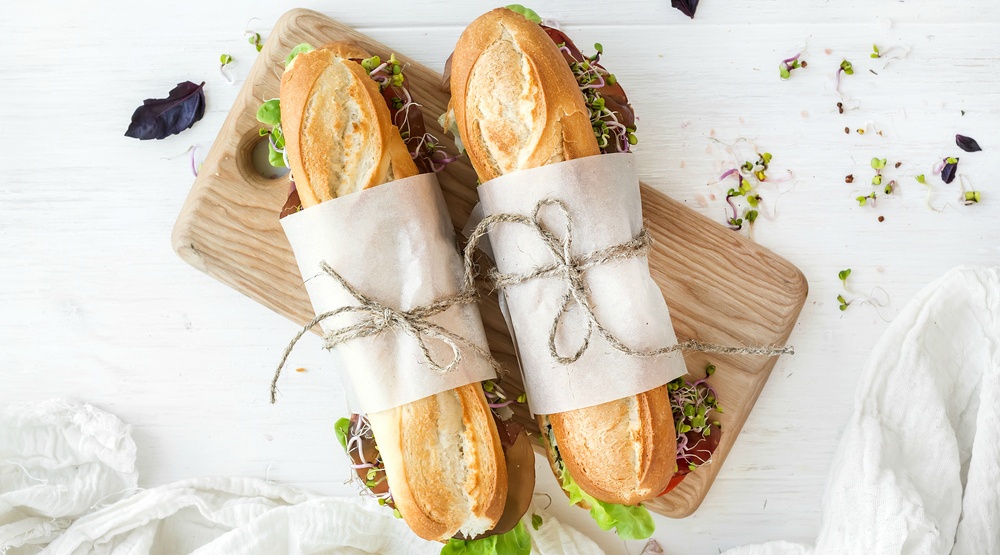 Simplicity at its best, the sandwich is one of the best lunch foods of all time. Bread, meat, veggies, and cheese, are somehow 100x better when they’re combined into one loveable meal.

If you’re in the mood for a classic sammy, be sure to check out any one of the 15 places below!

Looking at this sandwich place from the outside, you really wouldn’t think anything of it. But once you take a bite of one of their delicious sandwiches, you’ll be hooked. Located inside of a convenience store at the corner of Sherbrooke and Peel lies Super Sandwich. Their menu is filled with classic sandwich combos like chicken salad, ham, and turkey. Though simple, it’s inexpensive, filling, and yummy.
Where: 1115 Rue Sherbrooke O

Have you had their schnitzel sandwich? It’s heaven. Seriously. This Jewish eatery has been killing the scene since it opened with various new takes on traditional Jewish dishes and the schnitzel sandwiches is hands down one of their top items.
Where: 4621 Rue Notre-Dame O

Specializing in…you guessed it…paninis, Joe’s Paninis serves up yummy grilled sandwiches all day long. Open 24 hours, you can stop in at 3pm or 3am and they’ll always have their signature paninis. Flavours include Philly Cheesesteak, Spicy Chicken, Turkey, Proscuitto and Brie, and Spicy Tuna.
Where: 1404 Rue Drummond

At L’Gros Luxe, it’s all about the grilled cheese. Order one as your main or have a miniature version atop one of their monstrous caesars, there’s no wrong way to indulge in their cheese-filled grilled cheese sandwiches at L’Gros Luxe. In fact, go extra hard during the month of November while their infamous “Month of Grilled Cheese” event is happening!
Where: Various locations.

Everything at this part bakery, party deli is heaven. Made with their freshly baked artisanal breads, they serve up unbelievable sandwich combos like the mouthwatering Muffuletta Sandwich stacked high with mortadella, capocollo, provolone, and pecorino.
Where: 114 Rue Fleury O

Serving up everything from hot dogs to poutine to smoked meat, Lester’s is one awesome deli. Located in the affluent neighbourhood of Outremont, no trip to Lester’s is complete without a sandwich. The lineup is nowhere near as long as Swartz’s, and their sandwiches are absolutely delicious. Be sure to order Lester’s vinegar french fries on the side.
Where: 1057 Rue Bernard Ouest

This bakery situated just north of the Jean-Talon Market smells so good, you won’t be able to resist entering as you walk by. Though their homemade breads and pastries are delectable, you’re going to want to sample something from their sandwich menu. Their menu contains four unique sandwich options. To give you a taste, one of their sandwiches is made with porchetta, roasted tomatoes, provolone, rocket, and fresh herb mayonnaise, while another is topped with smoked salmon, cream cheese, fennel, caper berries, and red onion.
Where: 357 Rue de Castelnau E

Located in the heart of downtown Montreal, Reuben’s Deli is a great place to sit down and relax if you’ve been shopping all day on Sainte Catherine Street. This Jewish deli is known for their sandwiches. With three parts of their menu dedicated to sandwiches (Gourmet Sandwiches, Grilled Melt Sandwiches, and Cold Deli Sandwiches), you’re in good hands. Be sure to try the Louisville Bourbon Steak Sandwich – it’s a favourite.|
Where: 1116 Rue Sainte Catherine

This take-out Portuguese eatery situated in the heart of the Plateau is known for their Portuguese roast chicken. While a classic roast chicken is a great dinner option, their roast chicken sandwiches are guaranteed to become the lunch dish of your dreams. The chicken is juicy, flavourful, and you can have them add a spicy sauce for a little extra kick.
Where: 3907 Boul St-Laurent

One of the oldest delis in all of Canada, Schwartz’s serves up their famous smoked meat sandwiches every day of the week. Founded by Reuben Schwartz in 1928, this family-run establishment is responsible for the Montreal smoked meat craze. Open until 1am on Fridays, 2:30am on Saturdays, and 12:30am every other day of the week, Schwartz’s is there for you day and night (as long as you’re prepared to wait in line).
Where: 3895 Boulevard Saint Laurent

This all vegan-sandwiches serves up some of the most scrumptious sandwiches in Montreal. Choose from eight original flavours including the BLT (made with coconut bacon), the Dragon Sandwich (made with tofu, carrot, daikon, beet, red cabbage, lettuce, sprouts, and Dragon sauce), and the Chana (topped with a chickpea and potato curry with coriander and apple-date chutney.
Where: 4631 Boul St-Laurent

Dunn’s extensive menu includes some of the most drool-worthy sandwiches in Montreal. They offer over five different types of smoked meat sandwiches, ranging from the Roll Club to the Lassiette of Smoked Meat, as well as several other sandwich options including the Hot Chicken and the Chicken Club Roll. Taking Montreal-style dishes a step further, Dunn’s even offers a smoked meat bagel meaning you can try Montreal-style smoked meat and a Montreal-style bagel all in one go. An added bonus? Dunn’s is open 24 hours, 7 days a week.
Where: 1249 Rue Metcalfe

Boucherie Provision is a market-to-table sandwich stop located in Outremont. All of the meat used is local and sustainable. They even make their own charcuterie and sausages in house. The Brisket Be sure to try the brisket sandwich!
Where: 1142 Avenue Van Horne