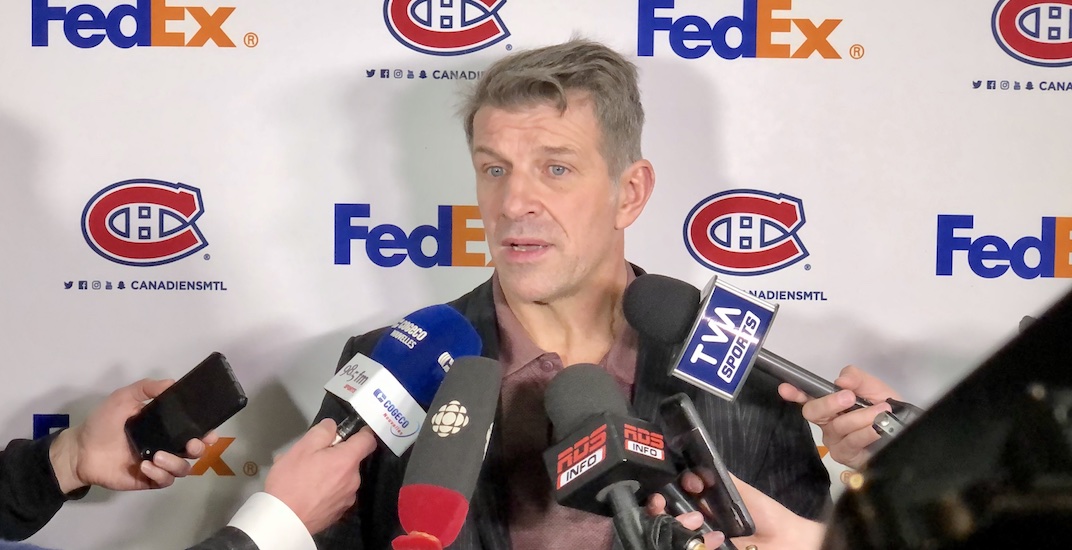 The Montreal Canadiens have been trying to cling to some hope of making a run at a playoff spot. However, losses to the Arizona Coyotes and Boston Bruins this week, along with the loss of Shea Weber for 4-6 weeks with a sprained ankle, should make it pretty clear that it’s not happening this year.

The trade deadline is coming up soon. It will be Marc Bergevin’s eighth as general manager of the Canadiens, but only the third time he’s in a position to be a seller.

Let’s go back and look at Bergevin’s previous work at and near the deadline to see how confident Habs fans should feel heading into it.

Erik Cole impressed in the first year of a four-year, $18-million contract with Montreal, scoring a team-leading 35 goals. But with him struggling in his second year, Bergevin shipped Cole off to the Dallas Stars in exchange for a former Hab, Michael Ryder, and a third-round pick.

Ryder was pretty good in his return to Montreal, scoring 21 points (10-11-21) in 27 regular season games and adding a goal and an assist in five playoff games. Cole continued to struggle in Dallas, scoring just seven points (6-1-7) in 28 games the rest of the season, and never returned to the level of production he was at in his first season with the Habs.

It didn’t end up being enough, as the Canadiens were upset by the Ottawa Senators in the first round. Still, the one move Bergevin did make turned out to be a pretty good one.

In early February, Bergevin swung what looked like a minor deal with the Vancouver Canucks, acquiring forward Dale Weise in exchange for defenceman Raphael Diaz. Then he made his big move at the deadline, acquiring Thomas Vanek from the New York Islanders in exchange for forward prospect Sebastien Collberg and a conditional second-round pick.

Even Weise provided surprising value to the Canadiens. “Dutch Gretzky” became a bit of a folk hero in Montreal, scoring clutch goals and driving Milan Lucic nuts. Meanwhile, Collberg never played in the NHL and Diaz didn’t amount to much either.

Bergevin’s big move at the 2015 deadline was acquiring Jeff Petry from the Edmonton Oilers in exchange for a second-round pick and a conditional fifth. He also added depth forwards Brian Flynn and Torrey Mitchell from the Buffalo Sabres in separate deals that ultimately cost them forward prospect Jack Nevins, a fifth rounder and a seventh rounder.

Petry was a strong addition and ended up being re-signed. He’s been a solid member of Montreal’s blue line ever since. Mitchell and Flynn each stuck around as a solid bottom-six forwards for a couple years. Nevins, 26, is currently in the ECHL.

Bergevin also made a trade with the Anaheim Ducks a week before the deadline, acquiring Devante Smith-Pelly for Jiri Sekac in a deal that didn’t really end up satisfying either team.

The Canadiens would go on to lose to the Tampa Bay Lightning in the second round.

After a 9-0-0 start, the 2015-16 season went off the rails for the Habs. Carey Price didn’t play after November 25, and Bergevin ended up being a seller for the first time.

His big move was to trade Weise and Tomas Fleischmann to the Chicago Blackhawks in exchange for Phillip Danault and a second-round pick. Danault’s become a very good two-way centre for Montreal, and getting him for a pair of depth players on expiring contracts has been one of Bergevin’s moves with the Habs. Weise is even back with the Canadiens now.

He also dealt Smith-Pelly to the New Jersey Devils in exchange for Stefan Matteau. Smith-Pelly actually had a strong finish to the season in New Jersey, scoring 13 points (8-5-13) in 18 games. But aside from some scoring some clutch goals during the Washington Capitals’ 2018 Stanley Cup run, he hasn’t done much since, and is now playing in the KHL. Matteau recorded just one assist in 12 games with the Habs.

Bergevin made several moves leading up to the 2017 trade deadline. He acquired defenceman Brandon Davidson from the Oilers for David Desharnais; Andreas Martinsen from the Colorado Avalanche for Sven Andrighetto; Dwight King from the Los Angeles Kings for a conditional fourth-round pick; and Steve Ott from the Detroit Red Wings for a sixth rounder.

Unfortunately, none of those players addressed Montreal’s obvious need for offence. Those four players Bergevin acquired combined to score one goal for the Habs, who struggled to generate offence in a first-round loss to the New York Rangers.

Perhaps Bergevin should have spent less time making so many inconsequential deals and more time trying to do something that could have actually helped.

Bergevin’s most notable move was dealing Tomas Plekanec, the longest-serving member of the team who’d played all 981 games of his NHL career up to that point in a Habs uniform, and Kyle Baun to the Toronto Maple Leafs for Rinat Valiev, Kerby Rychel and a second-round pick.

None of Baun, Valiev or Rychel have amounted to anything, but even getting just getting a second rounder for Plekanec at that stage of his career wasn’t a bad return.

Bergevin also dealt defenceman Joe Morrow to the Winnipeg Jets for a fourth rounder and acquired Mike Reilly from the Minnesota Wild for a fifth.

There were also plenty of trade rumours surrounding captain Max Pacioretty, who was in the second last year of a contract that carried just a $4.5-million cap hit and was going to be in for a significant raise on his next deal. Bergevin ended up hanging on to Pacioretty until September, when he dealt him to the Vegas Golden Knights in exchange for Tomas Tatar, Nick Suzuki and a second-round pick. That trade is looking terrific for the Habs, so we’ll give Bergevin some credit for holding off until he got the right deal.

Still, seeing Plekanec in a Leafs jersey was just wrong.

The Habs were in the thick of the playoff race, but like in 2017, Bergevin made only minor deals.

He reacquired Weise along with defenceman Christian Folin from the Philadelphia Flyers in exchange for David Schlemko and Byron Froese. He also acquired Jordan Weal from the Coyotes for Michael Chaput, and brought in Nate Thompson and a fifth-round pick from the Kings in exchange for a fourth rounder.

Weal ended up being somewhat productive, chipping in 10 points (4-6-10) in 16 games, while Thompson scored seven (1-6-7) in 25 and served as a solid fourth-line centre. It wasn’t enough, though, as the Habs ended up missing the playoffs. They finished two points behind a Columbus Blue Jackets team that was much more aggressive, acquiring forwards Matt Duchene and Ryan Dzingel from the Senators.