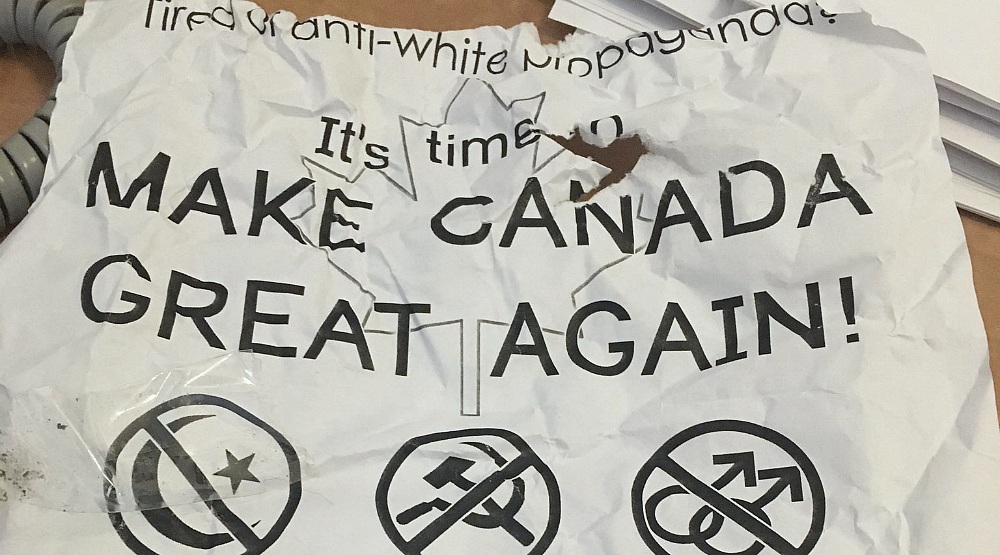 Images of flyers posted around Montreal’s McGill University featuring prominent anti-Muslim, anti-Communist and anti-gay messages have been making the rounds of social media since yesterday. With the phrase “Make Canada great again”, an obvious reference to Trump’s MAGA campaign slogan, it has many Canadians worried that this may be a sign of things to come and that some of Trump’s hateful rhetoric that helped get him elected may be seeping through to this side of the border.

“Tired of anti-white propaganda?” the flyer reads. “It’s time to make Canada great again.” The message is followed by three crossed-out symbols that clearly represent the Muslim faith, communism, and homosexuality. The flyer then proceeds to inform us that the message was brought to us by “your local deplorables (an obvious reference to Hillary Clinton’s speech where she used the word to describe some of Trump’s supporters) and includes the websites of white supremacy groups (media stories did not include those links).

Most people (including McGill’s staff and students) have reacted with disgust and concern at the messages contained in this flyer, but quite a few people have been chiming in with advice to simply “ignore” or treat said messages as a joke.

“Maybe try growing up and not being so ‘alarmed’” were one man’s (let’s call him Gord) beautiful words of wisdom. Gord took the time to ensure that the word “alarmed” was in quotes, discretely invalidating people’s perfectly legitimate reaction to a hate message. Perhaps I’m going out on a limb here, but if I were to deduce that this man was neither Muslim nor gay I would probably be right.

Another commentator (let’s call him Scott) philosophically pondered whether there were any actual benefits of having a normal human reaction to someone’s bigotry and decided that social media was to blame for this being blown out of proportion.

“Remember back when we didn’t pay attention to stuff like this?” Scott pined nostalgically. “How we used to follow the principle that if you don’t cast a light on it, it will disappear? Those were the days.” [Can’t you just see Scott shaking his head in silent agreement with himself?] “Now every single tweet, Facebook post, Instagram photo or Reddit thread is cause for outrage and will ultimately lead to the downfall of mankind.”

“The downfall of mankind”… Scott is thinking big here.

Then another guy (let’s call him Dave) chimed in complaining about “triggers, triggers; triggers” everywhere, implying that people bringing attention to this are weak and easily upset.

It’s not just clueless commentators on social media, however. Even well-respected CBC columnist and long-time journalist Neil Macdonald tweeted: “Imbeciles put up posters and get exactly the reaction they wanted. Unsigned declarations aren’t worth reading.”

Except, of course, they most definitely are!

While I have no reason to doubt Macdonald’s sincerity about his desire to squelch and ignore such hateful messages, the problem with statements like this one (as well-intentioned as they may be) is that there’s an inherent assumption that by ignoring them they go away. They don’t. In fact, multiple studies have proven that not reacting to them emboldens the haters and often comes across as agreement or encouragement.

Most importantly, choosing not to react to hateful messages or dismissing them as unimportant is the privilege of majority groups. If you have been the target of scorn and hate as a gay person or as a Muslim you are not as likely to be able to brush aside messages targeting you.

People who nonchalantly urge others to ignore these hateful messages or seek to minimize them are routinely in majority groups that have never felt the sting of discrimination, prejudice, and even outright hate against them simply because of the colour of their skin, their sexual orientation, or their religion.

“In the face of hatred, apathy will be interpreted as acceptance — by the perpetrators, the public and, worse, the victims,” states the Southern Poverty Law Centre’s “Ten Ways to Fight Hate: A Community Response Guide. “Decent people must take action; if we don’t, hate persists.”

Whether you think this McGill incident is real hate propaganda that should be ignored because we run the risk of spreading their message, or whether you think this is a dumb and immature joke by someone with a very bad sense of humour, ignoring it is not the solution, and dismissing people’s fears and worries is displaying privilege – mainly of the straight and white kind.

Unless you’ve personally been the target of hatred because of your religion or your sexual orientation you don’t get to police other people’s reactions to those messages. While I applaud the vast majority of Montrealers and Canadians who responded with disgust at the messages contained in the flyer, I would urge the others not to be so keen on dismissing or downplaying them. All hate should be denounced loudly and clearly. Otherwise it receives permission to move in.