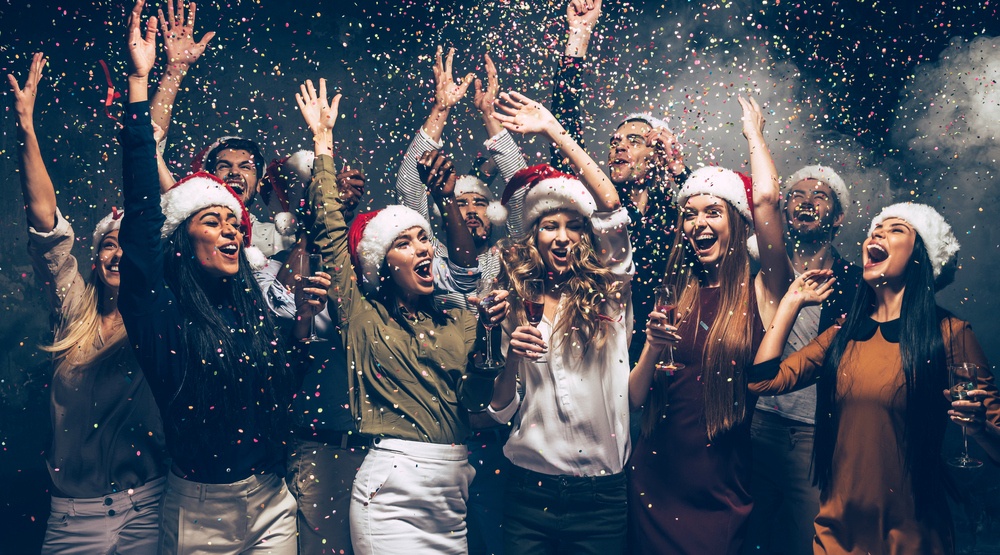 Spread some holiday cheer by attending any one of the super festive, ultra fun events below! From holiday markets and light displays to ice skating rinks and Santa exhibitions, there is no shortage of Christmas events happening this November and December.

Check out 28 holiday events happening in Montreal in 2016.

Enjoy the crisp winter air, listen to some rockin’ live music, and wave at Santa as he goes by courtesy of the CP Holiday Train in Beaconsfield. This annual holiday fundraiser is one of the best in the city and features North America’s longest rolling food bank. Over a three week period, 150 musicians will play from stages set up on the travelling train. When the train rolls through Montreal, be there to cheer on the bands and donate cash or food items.
When: November 26, 8pm
Where: Beaconsfield Train Station, 104 Elm St.

Get in the Scandinavian holiday spirit at the Norwegian Christmas Sale. This annual holiday fair is a perfect excuse to get your shopping started early. You’ll have the opportunity to purchase Norwegian food, like specialty marzipan cakes, as well as Norwegian crafts, gifts, and much more.
When: November 11-12
Where: 5065 Sherbrooke Street, Lachine

Combining Christmas and Montreal’s tech community is TechNoel 2016. This holiday party welcomes startups, entrepreneurs, investors, and web agencies to their festive dinner & drinks event. Celebrate the holiday season, network with fellow members of the technology industry, and support MTLinTech in the process. Tickets start at $15.
When: December 15
Where: Le Drink, 3565 Boulevard Saint-Laurent

Every student’s favourite bar, Cafe Campus is hosting the ultimate holiday zumba party this November. Spread some holiday cheer while working up a sweat. Run by the girls from the Glow in the Dark Party, this is the dancing event you don’t want to miss. Tickets are $20 in advance or $25 at the door.
When: November 20
Where: Cafe Campus, 57 Prince Arthur Est

The outdoor rinks may not be open but that doesn’t mean you shouldn’t enjoy your first skate of the holiday season. Head to Atrium Le 1000 on Gauchetiere for some ultra fun indoor skating. They are open every day of the week and have skates available for rent.
When: Any day of the week
Where: 1000 Rue de la Gauchetière O

In addition to the upcoming Nutcracker Market, you can also get your Nutcracker fill courtesy of the Les Grands Ballets. The full-length rendition of The Nutcracker is coming to Place des Arts from December 10 until December 30th. Performances will take place at 2pm and 7:30 pm. Telling the story of Clara, who receives a beautiful nutcracker for Christmas, the young girl is then swept into a fairytale world in which the nutcracker becomes a prince and mice and rats battle an army of toy soldiers. A timeless tale perfect for all ages, you are sure to be mesmerized by Tchaikovsky’s breathtaking score.
When: December 10-30
Where: Salle Wilfrid-Pelletier

Octoraise has invited over 30 local artisans to showcase their products at this year’s holiday market. Taking place on the last weekend of November, this pop up fair will feature “unique, fun, and creative gifts” by local entrepreneurs.
When: November 30-December 1
Where: 1515 Sainte Catherine West

The Stewart Museum’s magical Christmas exhibit opens on November 16th. The exhibition will showcase 30 Santa figurines and a Szalasi doll castle that comes to life when music plays. Admission to the museum and the special holiday exhibit are free.

Let loose and have a little fun this holiday season on top of Mount Royal. Every year, the mountain hosts a slew of winter activities, most notable among them, snow tubing. Bring your own tube or rent one on top of the mountain and slide down the specially designed tracks.
When: December 2016-March 2017
Where: Mount Royal, Beaver Lake

The Puces Pop Fair is coming to Montreal this December for their annual Winter Edition. The 2016 Winter Edition will take place over the course of two weekends, December 9-11 and December 16-18. This arts & crafts fair arrives just in time for the holidays so you can get your Christmas shopping on. All of the vendors will be local and they will be selling everything from soap and teacups to clothing and maps.
When: December 9-11 and 16-18, Fridays 3 pm-9 pm, Saturdays 11 am-7 pm, Sundays 11 m-5 pm
Where: Eglise Saint-Denis (5075 Rivard, corner Laurier – Laurier Metro)

The November Market is back for the second year in a row. Hosted by Artgang Montreal this exciting event is part market, part festival. There will be 40 local exhibitors selling a variety of seasonal goodies. However, there will also be a day full of workshops, live music, and an art demonstration by the Academie des Beaux-Arts de Montreal.|
When: November 19
Where: Artgang Montreal, 6524 Rue Saint-Hubert

Snowshoeing Among the Trees

Go on an enchanting snowshoe tour through the trees of the Morgan Arboretum. The 5km trail starts from behind the Arboretum’s Pine Cottage and takes you all around the centre’s grounds. Prepare for a day of snow-filled fun. Snowshoe rentals cost $7.
When: December 2016-March 2017
Where: Morgan Arboretum, 150 Ch des Pins, Sainte-Anne-de-Bellevue

Montreal’s Santa Claus Parade, otherwise known as Défilé du Père Noël, is officially happening in 2016 (not that we ever had any doubt). Confirmed for November 19th at 11am, there’s less than one month left until we can watch Santa make his way down Sainte Catherine Street. Prepare for an array of creative floats, fun performers, free goodies, and of course, Santa and Mrs. Claus to wave goodbye at the end of the parade.
When: November 19, 11 am
Where: Sainte Catherine Street West, beginning at Rue Fort and ending at Rue Saint Urbain

The official Christmas party of the season, the Montreal Christmas Bar Crawl will draw over 10,000 people as you weave your way through some of our city’s hottest bars. Though there aren’t a ton of details yet, it’s safe to say that this will be a night to remember.
When: December 23
Where: TBA