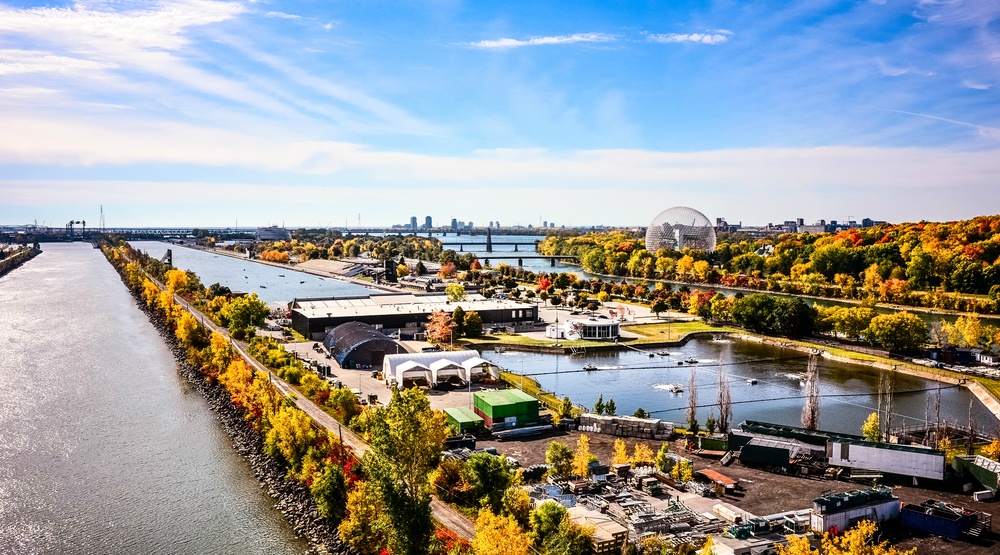 Between The Book of Mormon, the new Cirque du Soleil show premiering, Earth Day celebrations, and a major literary festival’s opening weekend, there are plenty of ways to keep busy during this Montreal weekend!

For a little weekend inspo, check out 20 things to do in Montreal this weekend: April 21 – 23.

The Tony-Award winning satirical musical Book of Mormon returns to Montreal this weekend! The play tells the story of two Mormon missionaries as they visit a village in Uganda and attempt to share their religion. Coming to Place des Arts’ Salle Wilfrid-Pelletier between April 18th and April 23rd, you have exactly 8 opportunities to see this fantastic show. Don’t miss your chance to see this clever, laugh-out-loud show!
When: April 18-23, 2017
Where: Salle Wilfrid-Pelletier

An immersive and luminous experience is happening right now at Montreal’s Notre Dame Basilica. Owing to the city’s 375th anniversary, Montreal’s most famous landmark is putting on a mesmerizing light show for the rest of 2017. Created by Moment Factory, Aura is a two-act multimedia show featuring both music and special lighting effects. According to the official description, “AURA will help visitors discover one of Canada’s greatest heritage monuments in a whole new way and will move them with its portrayal of its treasures.”
When: April 21, 6 pm and 8 pm
Where: Notre Dame Basilica, 110 Notre-Dame St W

Montreal’s beloved 21 Swings (or 21 Balancoires) has returned to Promenade des Artistes! Open until May 28, is there any better sign that spring has arrived? The interactive, music art installation has us all feeling like children again as we swing back and forth while a beautiful melody plays. Created by Daily tous les jours, in collaboration with animal behaviourist Luc-Alain Giraldeau and composer Radwan Ghazi Moumneh, this fun and colourful urban playground is open 24 hours a day between April 10th and May 28th.
When: April 10-May 28
Where: Promenade des Artistes

Papier 11 is a paper art fair that takes place annually in Montreal. Attracting thousands of people from all over the city, this event specializes in contemporary art creations made out of paper (drawings, engravings, photographs, collages, etc). Many local galleries and artists are represented including Studio 21 Fine Art, Pangea Project, Gallery Nicolas Robert, and many more. As this is the festival’s 10th anniversary, it will feature nearly 300 artists from 39 galleries.
When: April 21-23
Where: TBA

A special exhibition on world-renowned painter, Marc Chagall, is on at the Montreal Museum of Fine Arts right now. The exhibit, titled “Chagall: Colour and Music,” explores the importance of music in Chagall’s life. It is multidisciplinary, featuring over 400 works ranging from sculptures and paintings to photographs and films. In addition, puppets, costumes, stained glass windows, maquettes, and gouaches are on display. According to the official site, “Music was a constant source of inspiration” for the Russian-French artist. “A favourite subject for his creations, it served as an internal rhythm and driving force for his compositions, and a key to the intensity and range of colour in his work.”
When: January 28-June 11, 2017
Where: Montreal Museum of Fine Arts

Canadian entertainment company, Cirque du Soleil, returns to its hometown this spring to perform its newest show, VOLTA. Volta is the travelling company’s latest show which tells a story centered on the freedom to choose and create your own path. Inspired by action sports, the show will feature a series of acrobatic stunts, an emotional score, a “visually striking” set, and a spiritual theme. Prepare for one of the most raw and emotional stories ever told by Cirque du Soleil.
When: April 20-July 2
Where: Under the Big Top, Old Port of Montreal

Toronto’s Charlotte Day Wilson might be one of the city’s best kept secrets. Her haunting voice and smooth beats is a mix of Sade and Lapsley, and her debut EP CDW is full of gems. From her single “Work” to her collab with BADBADNOTGOOD in “In Your Eyes,” Day Wilson is one artist to keep on your radar, or to check out this month.
When: April 22, 8 pm
Where: Phi Centre, 407 Saint-Pierre Street

The Montreal Science Centre recently became home to an all new exhibition titled CSI: The Experience. The interactive, crime scene-themed exhibit opens April 6th and is based on the famous television show of the same name. According to the exhibition’s description, CSI: The Experience is a “learning adventure into the world of criminalistics,” that encourages participants to crack the case. Museum-goers will get to draw their own conclusions about the evidence presented and try to decipher which clues need further analysis. From there, participants will have the opportunity to compare tire tracks and shell casings and to carry out real-life forensics tests, such as blood spatter and DNA analysis. Not only will you learn about forensic anthropology and toxicology, but you’ll get to feel like a real detective solving the case. Don’t miss out on the chance to conduct your own criminal investigation!
When: Opens April 6
Where: Montreal Science Centre

Quebec eco-entrepreneur permaculture community, Terra Perma, is hosting a popup sugar shack in Montreal between March 18th and April 30th. Sirop Urban Shack is set up in Montreal neighbourhood, St. Henri, and features an all-you-can-eat menu filled with maple goodies courtesy of Terra Perma’s artisanal small batch syrup. Dishes include pea soup, home-style potatoes, smoked bacon, pancakes, sugar pie, and more. Plus, the atmosphere is said to be both fun and enchanting, with a mixture of laid back and gourmet vibes. Tickets cost $20 each so be sure to get yours before they’re gone! This is one of the best opportunities you’ll get to experience a sugar shack without leaving the city.
When: March 18-April 30
Where: 3580 Notre-Dame W

One of the city’s best literary festival returns for yet another year this April. This year’s festival features all sorts of events, ranging from workshops to readings. In addition, a multitude of literature will be represented including graphic novels, poetry, and both fiction and nonfiction. Read more about the 2017 programming here.
When: April 24-30
Where: Various locations

Celebrate Earth Day with the Redpath Museum. Titled “Toby and the Toads: You’re Never too Young for Natural History,” the event is free to attend and is perfect for both children and adults. This special event will teach guests all about the behaviour of a tropical toad. There will even be an outdoor nature walk where people can learn about Canadian Wildlife Federation’s Wild Family Nature Clubs.
When: April 23, 2:30 pm -4:30 pm
Where: Redpath Museum, 859 Sherbrooke St W

Bixi Bikes are now back on the roads which means it’s time to start exploring our city’s beautiful bike paths. With bike paths all around the city, cycling in Montreal has never been easier. And if you know where to go, you’ll find that Montreal boasts some pretty magical bike paths – so magical in fact, they may give you a whole new perspective on your favourite city. So hop on your bike, borrow one from a friend, or take advantage of the city’s Bixi bikes and get pedalling! For a little inspiration, check out the most beautiful bike paths in Montreal.
When: Anytime
Where: Various locations