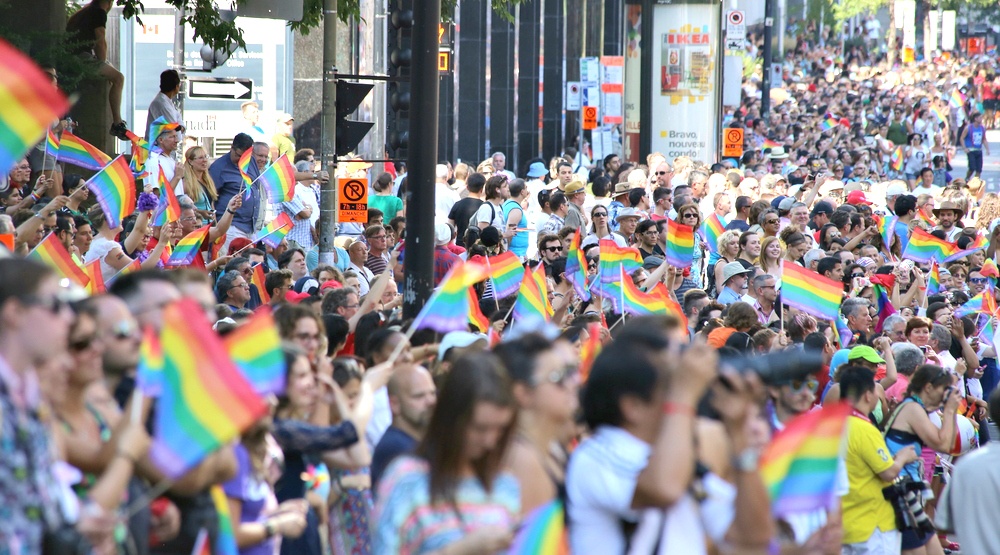 Get ready Montreal. From August 8th to the 14th, the bright colours of the LGBT community will shine bright during Montreal Pride!

With one of North America’s largest LGBT populations, it’s no wonder that Montreal Pride continues to draw hundreds of thousands of people from around the world to dance and celebrate all week long.

From Divas to Drag Queens and everything in between, here’s your all-inclusive guide to celebrating Montreal Pride!

Hit the ground running and kick off your Pride celebrations with a fab fundraiser cocktail at the W Montreal’s famous Wunderbar. $6 cocktails specials (with $1 from each cocktail going to the Jasmin-Roy foundation) and epic beats by DJ Kev-J.

With that bright smile, sophisticated attitude, and unforgettable style, DJ Abeille is one of Montreal’s best DJ’s and coolest personalities. For Montreal Pride she’ll be spinning one of her pop-infused, eclectic sets under the evening sun at the gates of the Gay Village at Place Émilie-Gamelin on Wednesday night.

When: August 10 at 6 pm
Where: TD Music Stage, Place Émilie-Gamelin

Who doesn’t love a good BBQ? Because Pride is all about celebrating our uniqueness within an inclusive community, the Mega Rooftop Jerk Chicken BBQ is a great place to gather and celebrate the 3rd edition of Afro Pride. Unity nightclub invites us all to gather on their decked out rooftop for a reggae and afrohouse infused happy hour of fun, food and other fabulous surprises.

RuPaul’s Drag Race has introduced us to some of the fiercest characters to ever sashay and chanté onto our TV screens. Montreal Pride is set to gag on the eleganza of a record number of RuPaul’s alum including Manila Lauzon, Alyssa Edwards, Jujubee, Pearl, Alaska, and more! The night will be hosted by recent RuPaul’s Drag Race winner, Bob the Drag Queen and she will be sharing the stage and hosting duties with Montreal’s very own glitter bomb, Mado!

As part of Montreal’s Pride celebrations, La Ronde will proudly fly the rainbow flag for Pride Day for the 3rd year in a row! Local drag personalities Miss Butterfly, Tracy Trash, and Franky Dee will be on hand to welcome guest and will later perform at the Fort Edmonton Saloon. There will be plenty more to see and do all day long. Tickets are available at La Ronde and will be almost $30 off the regular price for Pride.

Lara Fabian is known throughout the world for her beautiful vocals in English and French. She is coming to Montreal for Pride and will be in very good company at one of this year’s most anticipated events. Joining the global superstar for a star filled night of diva glamour are Lulu Hugues, Michelle Sweeney, Sandy Duperval, and many more. We all love our divas and this promises to be a music lovers dream come true.

When: August 12 at 8 pm
Where: Place Émilie-Gamelin

Some of Montreal’s best parties happen at Beachclub and Montreal Pride will be no different. Fierté à la Plage (Pride at the Beach) will kick off at 11 am on Saturday morning and runs all day long. Beachclub will feature performances by Yinon Yafle and more. Shuttle services to and from Beachclub are available and leave from Berri Metro.

Gather with your friends and saunter along the pedestrian promenade during Community Day in the Village. Numerous kiosks from community groups, businesses, organizations, sports teams and more will pop up along the street, giving you a peek at what they do. This event is open to all curious minds with the objective being to involve, educate and entertain.

When: August 13, 11 am to 5 pm
Where: The St. Catherine St. Village Pedestrian Promenade

For years the Montreal Pride Parade has attracted hundreds of thousands of spectators who watch dozens of floats, dance troupes, acrobats and performers parade from west to east along Rene-Levesque Blvd. This year’s theme is inspired by the fourth colour in the rainbow flag, Green, as a symbol of life, nature, rebirth, prosperity and change. The parade kicks off at 1 pm and the annual moment of silence to remember those no longer with us will be held at 2:30 pm. Dress in your rainbow Pride Parade finest and come out to the most fabulous event of the year!

When: August 14th, 1 pm
Where: Rene-Levesque Blvd between Guy and Sanguinet

DJs Marina (Montreal), Chus & Ceballos (Madrid) and Alain Jackinsky (Montreal) will set the sounds for the biggest afternoon T-Dance party during Montreal Pride. Dance under the sun and stars and celebrate how lucky we are to live in a city as colourful and accepting as Montreal.

When: August 14, from 1 pm
Where: Place Émilie-Gamelin