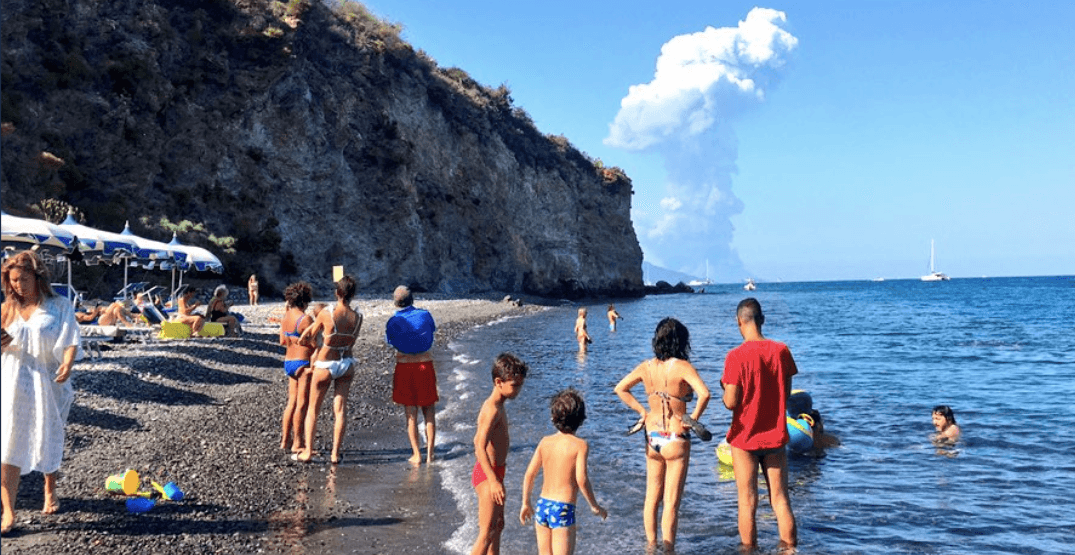 A volcano has erupted on the Italian vacation island of Stromboli on Wednesday afternoon.

The skies filled with clouds of ash as lava flows have been seen coming down the mountain. Reports are sharing that at least one person who was hiking the volcano has died.

The National Institute of Geophysics and Volcanology has reported two main explosive events at 14:46:10 and 14:46:40 UTC, followed by a strong intensity explosion at 17:16 UTC. Lava spills have been recorded from all active mouths of the crater terrace, and an eruption column rose two kilometres above the summit area.

Planes are attempting to put out the fire caused by the flowing lava as onlookers are sharing that “panic and chaos” have ensued among the people present on the island, with many trying to escape into the sea by swimming or boarding small boats. The reported death appears to have been caused by falling volcanic debris, according to Forbes.

A popular hiking spot for tourists, Stromboli is one of the most active volcanoes on the planet. It is known as the “Lighthouse of the Mediterranean” due to its bright and frequent eruptions at night. The volcano has been erupting almost continuously since 1932, typically limited to small gas explosions. Violent eruptions are rare, although tourists have been injured and, in rare cases, killed as recently as 2001, according to Volcano Live.

Reactions have been shared on social media.

We headed to the piazza where a huge crowd gathered – not sure where to go or what to do. The smoke continues to drift and fires are still burning. We met 2 people from Erie who were supposed to be hiking up to the top today – hoping that they are ok. #stromboli #iddu #Idduwakes pic.twitter.com/gpTiqKrNVv

The vulcano #Stromboli just erupted. Never seen something like that. pic.twitter.com/YmPnwaWRVC

View from the Panarea harbor as Stromboli erupts. Hoping everyone is safe on the ground. Visible lava flows headed down the mountain. pic.twitter.com/apZT3G3C57

Live feed of Stromboli volcano off the coast of Sicily as a larger than normal explosion occurs not long ago.https://t.co/DD7wQnaKPb

You’re just about to hike up Stromboli and it explodes and the whole island is evacuated to a safe zone.#stromboli pic.twitter.com/qSYkf6eZRm

Leaving #stromboli I’ve never feel so much fear in my life. pic.twitter.com/j33oo3FKKL