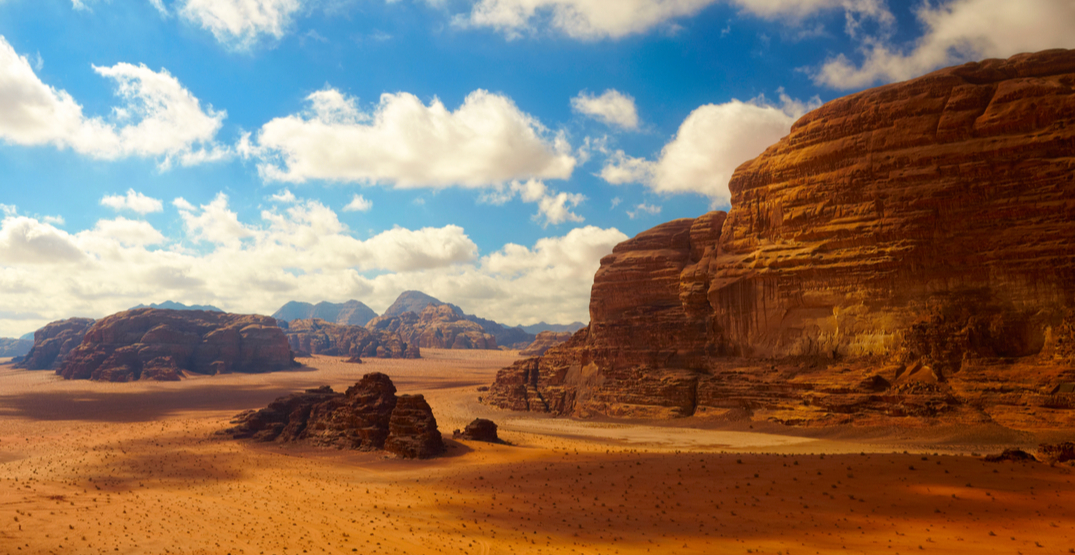 Today is Star Wars Day. A day to appreciate all things intergalactic and wonderful and celebrate a franchise that has taught us many underlying lessons over the years, including the importance of hope, family, and the conquering of light against the dark side.

It also featured Wookiees and droids and epic lightsaber battles and tons of other super awesome things.

While we may not be able to travel right now due to current global restrictions, we can still appreciate from afar the iconic filming locations that brought the Star Wars universe to life.

In a sense, isn’t that how we have always appreciated them? They did, after all, take place in a galaxy far, far away.

Without further ado, allow us to help you virtually visit some of the most iconic filming locations of Star Wars.

This beautiful red-sanded location has been utilized for two movies in the Star Wars universe. Initially, it provided the landscape for the moon Jedha in Rogue One, the final installment of the Star Wars genealogy. It was also used to portray the fictional planet of Pasaana in the last chapter of the Skywalker storyline, Episode IX: The Rise of Skywalker. The stark and dramatic backdrop presents an extraterrestrial atmosphere, while the towering rock structures and breathtaking desert supply a bleak but beautiful element that is almost a character in itself. Wadi Rum has also been used as a filming location for other massive Hollywood blockbusters, such as Prometheus, The Martian, All the Money in the World, and Aladdin.

Avid Star Wars fans will no doubt be able to recognize the backdrop that brought Tatooine, the home planet of Anakin and Luke Skywalker, to life. Two Star Wars movies — Episode IV: A New Hope and Episode VI: Return of the Jedi — utilized the iconic landscape. For those looking to venture off and explore the specific areas for themselves (once it is permitted, of course), must-see filming locations include Holden Canyon, Artists Drive/Palette, Desolation Canyon, Twenty Mule Team Canyon, Dante’s View, and the Mesquite Flat Sand Dunes. Hiking is not recommended at Golden Canyon or Desolation Canyon in the hotter months, according to the National Park Service.

There is an abundance of Star Wars filming locations in Tunisia. The franchise has taken full advantage of the differing beautiful landscapes of the country to create multiple iconic scenes and settings. The Berber town of Matmata contains several underground troglodyte (a person who lived in a cave) dwellings, one of which can be seen in Episode IV: A New Hope, as the Lars Homestead where Luke grew up with his aunt and uncle. It also made a reappearance in Episode II: Attack of the Clones. The location has since been transformed into the Hotel Sidi Driss, an accommodation for die-hard Star Wars fans.

Other filming locations include but are not limited to Tataouine (the real name of a city that inspired George Lucas’ naming of the Skywalkers’ home planet), which was used as the Mos Espa Slave Quarters. Additionally, Djerba Island, off the southern coast of Tunisia, was used to represent the Mos Eisley Cantina as well as the location of Obi-Wan Kenobi’s house, where he lived in exile in Episode IV: A New Hope.

Finse is a small mountain village on the shore of Lake Finsevatnet in Norway that was used as a filming location for the exterior scenes of the ice planet Hoth in Episode V: The Empire Strikes Back in March 1979. According to StarWars.com, the cast and crew stayed in the Finse 1222 Hotel, which still portrays its association with the franchise for guests with a signed guestbook as well as a wall full of behind-the-scenes pictures. Additionally, the lobby also contains a prop of a Rebel trooper hat worn by one of the extras in the film. Finse was used as the location where Luke Skywalker escaped from the wampa (the exterior was shot in Finse while the interior of the wampa cave was shot in England). It is also the filming location for when Han Solo cut up the tauntaun to keep Luke Skywalker warm.

A post shared by Villa del Balbianello (@villadelbalbianello) on Jan 5, 2020 at 3:08am PST

The breathtaking scenery of Lake Como, Italy, provided a gorgeous filming location of two Star Wars movies, Episode II: Attack of the Clones and Episode III: Revenge of the Sith. Couples from around the world journey here to pretend that they are Anakin Skywalker and Padmé Amidala on Naboo while overlooking the lake from Villa del Balbianello. Visitors are typically able to visit the villa from March until November. However, it is temporarily closed for now due to the pandemic. The hotel was also a filming location for one of the James Bond films, Casino Royale.

The Rub’ al Khali was utilized as a Star Wars filming location to represent Rey’s home planet of Jakku in Episode VII: The Force Awakens. The beautiful cascading dunes and seemingly endless desert provided the ideal landscape to represent the home of thieves, outlaws, and refugees, a stark contrast to what it once was, a planet full of luscious forests and rich in natural resources, including water. The sheer expansiveness of the Rub’ al Khali is a valuable illustrative device to draw the stark contrast between what the planet once was to represent what it has become. The Rub’ al Khali is the world’s largest contiguous desert, extending across a majority of the southern third of the Arabian Peninsula, encompassing portions of Saudi Arabia, Oman, the United Arab Emirates, and Yemen.