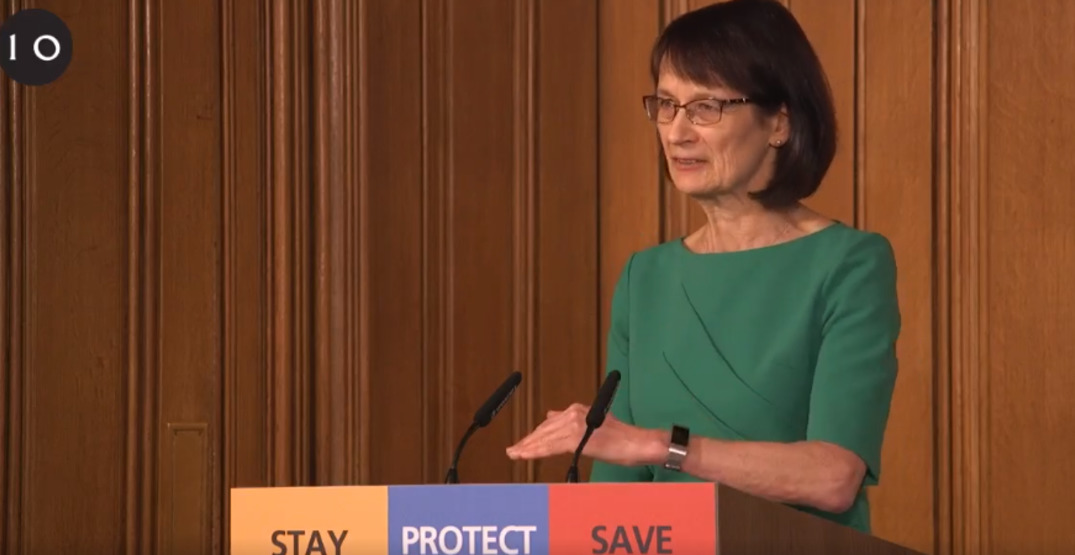 Still of Dr. Harries during the 10 Downing Street press conference

The COVID-19 lockdown period in the United Kingdom could extend to as long as six months.

Within these 12 weeks, it is estimated that the country will see a pivotal moment when the UK will “move the peak [of known confirmed coronavirus cases] across,” causing it to drop, thus allowing the country to “get on top of the virus.”

However, proof of this theory will not be seen for another two to three weeks.

“That is because our most constant figures are the deaths,” Dr. Harries stated. “The deaths follow the number of infections.”

This information typically requires a “two- to three-week time lag.”

Similarly, it takes additional time to accurately understand whether or not the preventative measures, such as social and physical distancing, are effective.

“We need to wait for two to three weeks to see what we have achieved collectively,” Dr. Harries stated.

“Then, the slope of that curve will start to indicate where a new peak will be. But we are optimistic that that peak will be lower.”

In terms of the lockdown period, when it was initially announced, Prime Minister Johnson stated that it would preemptively last three weeks.

However, he also stated that government and health officials would reevaluate at the end of this period to see where things stand.

“It would be foolish of us to start something one day and assume that it is going to have an impact the next,” Dr. Harries continued.

“For all of us, it has taken quite some time to get used to this new way of living, to ensure that we practice social distancing, and we stick to that. As a population, we have evidence that we are getting better at that as we go through.”

According to Harries, UK residents are doing their best to stay at home, use public transit less, and only commute to work when it is absolutely essential.

But these measures have only been in effect for just over a week, and Dr. Harries stated that another couple of weeks is necessary to see these practices through and determine whether or not the preventative measures have had an impact on slowing the curve of infections.

“If we are successful, we will have squashed the top of that curve, which is brilliant,” Dr. Harries explained.

However, she also stated that even if this does happen, it is no reason to revert back to daily life as it once was.

“That would be quite dangerous. If we stopped then, all of our efforts will be wasted and we could potentially see a second peak. Over time, probably over the next six months, we will have a three-week review, we will see where we’re going, we need to keep that lid on, and then gradually we will be able to hopefully adjust some of the social-distancing measures and gradually get us all back to normal.”

Dr. Harries stated that three to six months is the ideal amount of time to see things start to return to normal, but that “it is plausible that it could go further than that.”

Still, when questioned, she was quick to clear up that this does not necessarily mean that the countrywide lockdown will extend to six months.

“The important thing is this is a moving target,” Dr. Harries stated.

“If we do well, it moves forward and comes down, and we manage all our care through our health and care systems sensibly and in a controlled way. And that is what we are aiming for.”

However, Dr. Harries, along with Prime Minister Johnson, anticipate that numbers will get worse before they get better.

In an open letter penned to the public, Prime Minister Johnson, who is in self-isolation after testing positive for coronavirus himself, was candid in his response to the ongoing condition of the country.

“It’s important for me to level with you – we know things will get worse before
they get better,” the Prime Minister wrote.

“But we are making the right preparations, and the more we all follow the rules, the fewer lives will be lost and the sooner life can return to normal.”

The full video of Sunday’s press conference can be seen below: