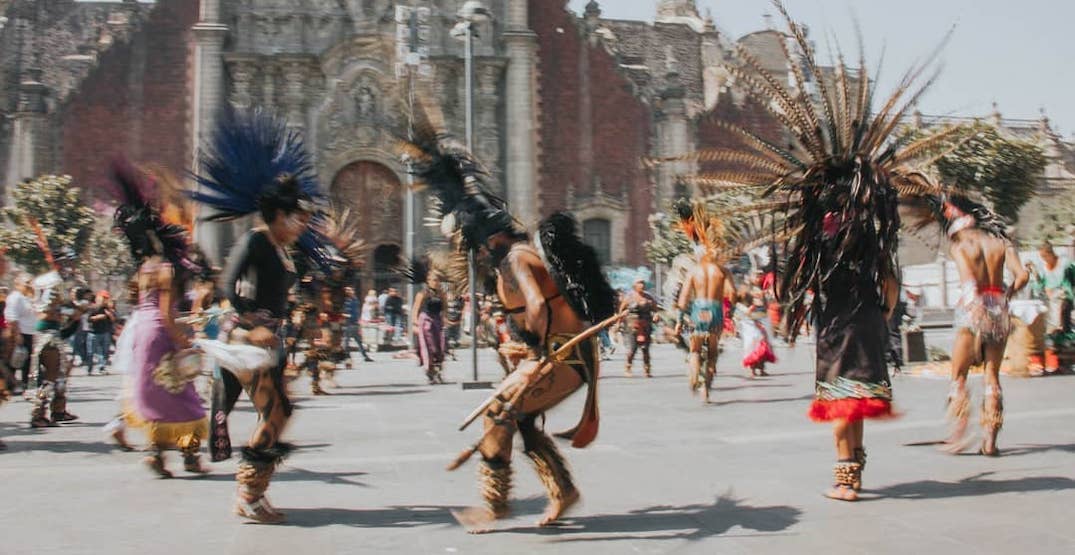 Summer is finally here. With warmer weather on the horizon, vacation days to be planned, and plenty of patios to be explored, there’s so much to look forward to this sunny season.

For many, summer and travel make the perfect pair as an undeniably iconic duo, and we all know one of the best ways to experience a destination is by connecting to the culture and the locals who know it best.

If you’re the type of traveller who loves to dive headfirst into the culture of a destination, why not travel alongside the Indigenous communities of the world? With historical connections to the land dating back thousands of years, there is no better way to get to know a destination’s hidden gems, rich history, and, of course, its people.

June 21 is National Indigenous Peoples Day in the land we now call Canada, so to help celebrate all things Indigenous we asked Sarain Fox, an Anishinaabekwe activist and artist who was recently named the newest partner to the TreadRight Foundation, to help share some of the top Indigenous experiences you can do on your next adventure.

Sarain is no stranger to exploring the many Indigenous traditions from around the world. Over the past few years she’s travelled far and wide to learn more about Indigenous culture for her TV shows RISE on VICELAND and Future History, currently airing on the Aboriginal Peoples Television Network.

Here are Sarain’s five must-do experiences from around the world that will get you closer to Indigenous culture.

Do the haka in New Zealand

Have you ever watched a rugby match featuring New Zealand’s famous All Blacks team?

It’s a terrifying but oh-so-cool dance that’s steeped in thousands of years of history and tradition. Used by the Māori, the Indigenous people of Aotearoa (the Māori name for New Zealand), the haka consists of several varieties traditionally used on the battlefield, as well as when groups came together during peacetime.

The haka is a fierce display of a community’s pride, strength, and unity. Actions include strong foot-stamping, sticking your tongue out, and rhythmic body slapping to accompany a loud chant.

The words of a haka often poetically describe ancestors and events in the tribe’s history. Today, the haka is still used during Māori ceremonies and celebrations to honour guests and show the importance of the occasion, such as family gatherings like birthdays and weddings.

You can learn haka practically anywhere in New Zealand, but make Rotorua, located on the North Island, a priority to visit. Its name derives from Māori as “the second great lake of Kahumatamomoe” (Te Rotorua-nui-a-Kahumatamomoe) and the city is steeped in culture and Māori tradition. Here you can connect with the local Tangata Whenua (People of the Land) in a spiritual and meaningful way by hiring a personal guide who can personally show you their home (including the amazing geothermal sites), tell you their stories and what kia ora truly means and of course, learn the haka.

I am extremely proud to be the ambassador of the school. Originally launched as a pop-up class by Manitobah Mukluks, the Indigenous-owned Canadian footwear company, at their Winnipeg office, the program began as a way for Indigenous youth to learn the art of mukluk and moccasin making from elders in the community. It was a way for Manitobah Mukluks to pass on knowledge so that the tradition that we all grew up learning – I grew up smelling tanned leather hides and beading at the kitchen table with my family – is kept alive and can inspire the next generation of Indigenous artists.

This program has since gone national thanks to our partners, the Bata Shoe Museum where the class is held and The TreadRight Foundation, a not-for-profit helping to make travel matter by safeguarding the people, planet, and wildlife for generations to come. The TreadRight Foundation, in particular, provides an annual grant that covers tuition for all Indigenous students, the two Indigenous artisans who teach the classes, and purchasing of the materials.

We host classes every Sunday that teaches much more than how to make a pair of moccasins or mukluks – though, that’s pretty cool in itself! Bead by bead, stitch by stitch, students are reconnecting with thousands of years of tradition and for Indigenous students, re-discovering who they are. So, the next time you’re planning to be in Toronto, you can check out the class and be part of Indigenous culture – right in the heart of the city!

A post shared by Chelsea Burgess (@chelseaburgessphotography) on Mar 14, 2019 at 1:15pm PDT

When you think of Mexico City, you might conjure up images of large plazas filled with salsa dancing.

The next time you visit North America’s largest city, pay close attention to groups of elaborately dressed dancers moving to the sounds of percussion-led rhythm for a lesson in the city’s rich Indigenous history that dates back as early as 300 BC.

Known as concheros, these Indigenous performers practice a form of dance that’s been derived thousands of years ago.

In pre-Hispanic Mexico, dance was a very important part of life and was related to religious ritual as a way to please the gods, ask for blessings, and receive permission to carry out activities. Today, dancers are dressed in traditional Aztec clothing, such as feathered headdresses (penachos) and the famed shell-embellished ankle cuffs that provide much of the musical beat for the dance.

They dance, much like their ancestors before them did, to honour the Gods and form a link with the cosmos. Each movement they make overflows with life and symbolizes the duality of the Aztec culture, with women, the night, the jaguar and the earth on one side and men, the day, the eagle and water on the other, and heavily features circles. It’s a great opportunity to witness and soak in Mexico’s Indigenous tradition. Salsa is great, but concheros is the real deal in Mexico City.

It may come as a surprise that Europe, specifically the northern part of Scandinavia and Russia’s Kola Peninsula, is home to its own Indigenous people.

Found to have inhabited the Arctic region since time immemorial, the Sámi people were originally nomads living in tents during the summer and more sturdy peat huts during the colder seasons. They are one of the world’s only Indigenous people with their own language, culture and customs that differ from the societies around them.

Sápmi, the land of the Sámi, boasts snow-capped mountains, wild rivers, pristine lakes and streams, tundra, and forest. Basically, a slice of heaven on Earth.

And there’s no better way to explore Sámi culture than by visiting a reindeer farm. Yup. Santa’s little helpers, but IRL, are a central element of how the Sámi live their lives, a legacy from the hunter/gatherer period with the herders following the reindeer on their ancient migration routes and seasonal foraging grounds.

At Njarka Sámi Camp by Lake Häggsjön, just west of Åre, Sweden’s biggest ski resort, you can get up close and personal with reindeer at this farm and experience a day in the life of a Sámi. You’ll be able to learn about reindeer, feed them and their calves, try lassoing and learn about Sámi culture and customs. You can also take part in the Sámi household such as tasting candied angelica, which comes from the Angelia plant that’s grown by the stream and dried. The plant was extremely valuable 1,000 years ago and it has been used by generations of Sámi as a medicinal plant. And if you’ve always wanted to know how to create the perfect campfire, this is the place to learn it. Fire plays a central role in the Sámi community.

Come to Sydney for Bondi Beach and the Opera House – they really are that pretty IRL – but stay to learn about the Aboriginal history of the land we now call Australia.

I had the honour of travelling Down Under this past April to help launch a new Aboriginal-led arts program in Sydney. Together with the TreadRight and KARI Foundations, KARI being one of Australia’s leading Aboriginal service providers, we created a new program where travellers on any of Contiki’s Australian East Coast adventures will have a once-in-a-lifetime opportunity to connect with a local Aboriginal artisan and take part in dot painting classes while in Sydney as part of the Contiki Cares responsible travel program.

Travellers will be able to not only learn about the importance of dot painting and its connection to the land’s original peoples, not to mention painting on and keeping the boomerang after, but they’ll also be able to contribute towards creating economic freedom for the local community simply by participating. This is truly what reconcili-ACTION looks like, and how you can #MakeTravelMatter.